How much does it cost to travel to Yokohama?

How much money will you need for your trip to Yokohama? All of these average travel prices have been collected from other travelers to help you plan your own travel budget.

A vacation to Yokohama for one week usually costs around ¥0.00 for one person. So, a trip to Yokohama for two people costs around ¥0.00 for one week. A trip for two weeks for two people costs ¥0.00 in Yokohama. If you're traveling as a family of three or four people, the price person often goes down because kid's tickets are cheaper and hotel rooms can be shared. If you travel slower over a longer period of time then your daily budget will also go down. Two people traveling together for one month in Yokohama can often have a lower daily budget per person than one person traveling alone for one week.


How expensive is Yokohama? How much money do I need for Yokohama?

How much does a trip to Yokohama cost? Is Yokohama expensive? The average Yokohama trip cost is broken down by category here. All of these Yokohama prices are calculated from the budgets of real travelers.

Yokohama On a Budget

Yokohama, Japan
Located on the western coast of Tokyo Bay just south of Tokyo, Yokohama is Japan's second largest city and one of the most-visited cities by foreigners. It features one of the largest Chinatown's in the world as well as many parks and architectural landmarks.

Most visitors are drawn to the waterside neighborhoods of Yokohama, most significantly Chinatown and Minato Mirai. These areas are bustling with people looking to experience the local sights, sounds, and flavors of the portside city. There are, however, impressive landmarks to be seen throughout Yokohama. Some of these include the Marine Tower (the largest on-land lighthouse in the world), the Landmark Tower (from which visitors can take in views of the entire city), and the Yokohama Hakkeijima Sea Paradise (an amusement park with marine animals). Also popular are the Bay Stars baseball stadium and the Nissan soccer stadium where visitors can catch sporting events.

Yokohama additionally hosts a number of museums, the most unique of which is probably the Cupnoodles Museum, which features over 3,000 product packages of instant ramen and showcases the history of the product as well as a make-your-own ramen workshop. Other museums, like the Yokohama History Museum, are dedicated to local art, history, and culture.

Central Yokohama is relatively compact. One of the more popular hubs of the city is the Chinatown/Yamashita Park area, which is best explored on foot. Yokohama's Chinatown is not only the largest in Japan, but also the largest in Asia and the second largest in the world behind the one in San Francisco. Located just steps from the water, it dates back to 1859 following the opening of Japan's ports to trade with the United States. Today it is very touristy, featuring around 250 Chinese-owned stores, eateries, and a colorful entry gate. From Yamashita Park, just a short walk northeast of Chinatown, the whole port Yokohama is visible. It is also common to find street performers here and in other parks throughout Yokohama, sometimes putting on impressive fire shows.

Minato Mirai, the business district, is another important part of Yokohama. It is host to several major hotels, the Yokohama Landmark Tower, the Pacifico Yokohama convention center, and the Cosmo World Amusement Park and Clock 21 Ferris wheel. Also located in the general area are art museums, cafes, shopping centers, and a pedestrian walkway called the Kishamichi Promenade.

Since the main attractions of Yokohama are fairly compact, the best way to see the city is to explore on foot. As mentioned earlier, the areas along the bay, which include Minato Mirai, Chinatown, and the piers between them, are most-frequented by visitors. Many days can be spend admiring the city's most prominent landmarks, sampling the local flavors of Chinatown and beyond, and experiencing the atmosphere of one of Japan's busiest port city.

As a metropolitan city, Yokohama has a range of food from Western favorites to plenty of traditional Japanese fare as well. Regular, sit-down meals are available everywhere, but for a cultural experience, try some of the typical Japanese "fast food." Sushi, ramen noodles, and katsu (fried cutlet, usually pork or chicken) shops have some of the best selections. As a coastal city, the fish and seafood is also the freshest around. Other culinary specialties of Yokohama include a Chinese-style steamed meat bun called nikuman, sweet fried rice cake balls coated with sesame seeds and filled with bean paste called goma dango, curry doughnuts, a beef onion stew dish with rice called hayashi rice, Chinese Shumai dumplings, a rice omelet called omu-rice, Kirin beer, and an almond soft serve ice cream called Annin soft cream. Yokohama's Chinatown is a great place to find the ice cream as well as some of the other Chinese-style dishes mentioned above.

Since Yokohama is only about 30 minutes south of Tokyo, the best way to travel is to fly into one of Tokyo's main airports - Narita or Haneda Airport. Some Narita Express trains from Narita Airport go through to Yokohama, though the cheapest way from Narita is to take a Keisei train to Nippori then change to a JR Keihin-Tohoku Line train for Yokohama. From Haneda Airport, travelers can take the Keikyu Line's Airport Express to Yokohama station in 30-35 minutes.

The majority of visitors to Yokohama arrive from Tokyo by train. Some additional options connecting the two cities by rail include: the Tokyu Toyoko Line from Shibuya to Yokohama Station; the JR Shonan Shinjuku Line from Omiya, Akabane, Ikebukuro, Shinjuku, Shibuya, Ebisu and Osaki; the JR Tokaido Main Line from Tokyo and Shinagawa stations (both on the Yamanote Line), and many others. 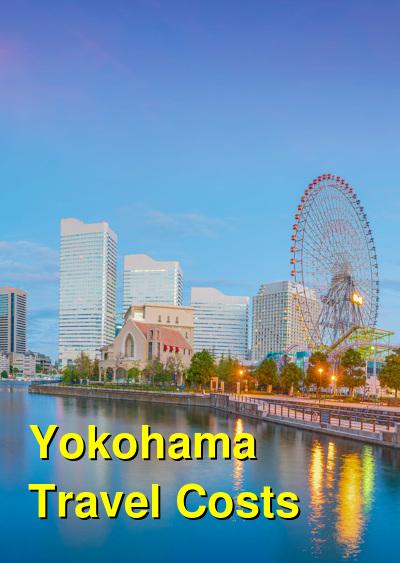