How much does it cost to travel to Sapporo?

A vacation to Sapporo for one week usually costs around ¥90,749 for one person. So, a trip to Sapporo for two people costs around ¥181,498 for one week. A trip for two weeks for two people costs ¥362,997 in Sapporo. If you're traveling as a family of three or four people, the price person often goes down because kid's tickets are cheaper and hotel rooms can be shared. If you travel slower over a longer period of time then your daily budget will also go down. Two people traveling together for one month in Sapporo can often have a lower daily budget per person than one person traveling alone for one week.


How expensive is Sapporo? How much money do I need for Sapporo?

How much does a trip to Sapporo cost? Is Sapporo expensive? The average Sapporo trip cost is broken down by category here. All of these Sapporo prices are calculated from the budgets of real travelers.

How much do vacation rentals cost in Sapporo? Prices vary by location, date, size of the place, and the level of luxury. See below for options.

How much does it cost to go to Sapporo? Naturally, it depends on the dates. We recommend Kayak because they can find the best deals across all airlines.

The price of renting a car in Sapporo will depends on dates, the type of car, the location, and your age. We recommend Kayak because they can find the best deals across all car rental companies.

Tips and Handouts Budget in Sapporo

Sapporo On a Budget 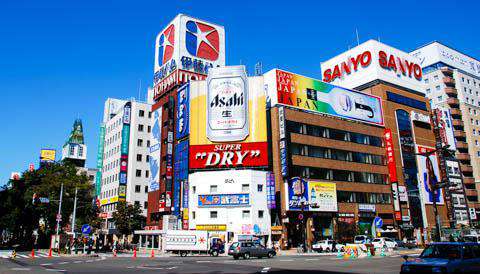 Sapporo, Japan (©Y.Shimizu/©JNTO)
Capital of the northern Japanese island Hokkaido, Sapporo is a city surrounded by mountains and known for its beer, skiing, and annual snow festival with stunning ice sculptures. As host to the 1972 Winter Olympics, the city limits are dotted with ski jumps, hills, and popular ski resorts still in use today.

As far as sights go, those in Sapporo are many and varied. The Clock Tower takes the stage as the oldest building still standing, constructed in 1878 for the Sapporo Agricultural College (now the Hokkaido University). Sapporo TV Tower stands as a carbon copy of the Eiffel Tower, while Odori Park sits at the city center as a quiet place filled with flowers, trees, and fountains during the summer. Ishiya Chocolate Factory is one of the city's novelties with a tour, restaurants, and a souvenir store to indulge in, while the Sapporo Beer Garden and Museum offers a tour and history of Japan's unique brewing past. On the outskirts of the city, there is even a large historical village, called the Hokkaido Pioneer Village, which gives visitors a snapshot of Japan in the industrialized age.

In regards to the natural wonders of the region, Moiwayama, also called Moiwa Mountain, offers scenic overlooks of the city, Asahiyama Park has beautiful colors in the spring and fall also with scenic overlooks, Jozankei houses access to hot springs, Moerenuma Park offers a place to relax amongst landscape installations, and Hokkaido University Botanic Garden features two rock gardens, a rose garden, a lilac display, a greenhouse, and many others.

For art, the Hokkaido Museum of Modern Art modern art museum offers a collection that includes both Japanese and Western art and temporary exhibits, while the Sapporo Art Park makes for a great way to enjoy oversized sculptures outdoors.

Susukino is the city's so-called red light district and the center for festivals and entertainment. With restaurants, bars, and hotels lining the streets this is the place to be if you wish to experience the nightlife of Sapporo. Odori Park is also nearby which plays a key role in Sapporo's famous snow festival as well. Both Odori and Susukino are near the city center where you can find historical buildings, shopping malls, and other parks. Some important landmarks of the area include the former Hokkaido government office building, the Sapporo Clock Tower, the Hokkaido Shrine (Hokkaido Jingu), and the Sapporo TV Tower. The Sapporo Factory, also nearby, was a former base of the Sapporo Brewery and has now been repurposed as a shopping mall with many restaurants, offices, and movie theatres.

Staged in early February, Sapporo's most famous event is the Sapporo Snow Festival. With an ice sculpture competition that attracts artists from around the world, the festival brings in close to two million tourists each year. It is held in the city center near Odori Park and features activities for all ages with the sculptures beautifully lit at night. Along with this winter theme, skiing and other winter mountain sports have been a continuously popular activity of the region. Mount Teine, which was featured in the 1972 Winter Olympics, is a ski mountain near the city with a good mix of beginner and experienced slopes. Niseko Ski Resort is also very famous, one of Japan's top destinations for skiing, located about two hours from Sapporo.

A unique delicacy of Sapporo is hairy crab, an expensive treat that can be found at any seafood restaurant. As with pretty much everywhere in Japan, ramen noodles are also very popular-though Sapporo has its own variation called miso ramen where miso paste is added to the stock of the noodle dish. Sapporo soup curry with vegetables and chicken is another local favorite. Looking at the bigger picture, on the island of Hokkaido as a whole, you can also enjoy dairy products like milk, cheese, butter, chocolate and ice cream, seafood especially as sushi, fruits like honeydew melon and strawberries, and meat including sausages, ham, bacon and beef. The drink of choice in Sapporo is Sapporo Beer which can be sampled at the Sapporo Beer Garden and Museum. Haskap, a local variety of edible honeysuckle, similar to blueberries, is also unique to Sapporo. Romantei is one of the most popular sweet shops in the city, while Aji No Tokeidai is the best known ramen noodle chain.

By air, Sapporo is served mainly by New Chitose Airport. Direct international service to Sapporo is limited to China, Hong Kong, Taiwan, Korea, Malaysia, Sakhalin, Guam, Honolulu in the US, and seasonal flights to Macau and Australia. Okadama Airport also provides a few local flights within Hokkaido land at the older Okadama Airport.

The main train station in the city is the JR Sapporo Station, though traveling this way can be time-consuming and expensive. Within Hokkaido, trains connect Sapporo to most major cities, including Hakodate, Otaru, and Asahikawa.

Express buses connect to most points in Hokkaido.

Locally, the best way to navigate is by bicycle or subway. There are three subway lines that converge at odori Station at the center of the grid. The Namboku Line runs north-south, the Tozai Line runs along Odori east-west, and the Toho Line runs in a C-shaped curve from northeast to southeast.