A Travel Price Comparison for Portugal Peniche vs. Funchal for Vacations, Tours, and Honeymoons

Should you visit Peniche or Funchal?

Which city is more affordable and which is best for your travel style? If you're trying to figure out where to go next, comparing the travel costs between Peniche and Funchal can help you decide which place is right for you.

Where Should I go: Peniche or Funchal?

Funchal is the capital city of the autonomous region of Madeira on the island of Madeira. The city is located to the south between the cities of Santa Cruz and Camara de Lobos. It is actually named for the fennel plant which grows liberally on the island. The city was most significant as a shipping center between the 15th and 17th centuries. Today it has a population of over 100,000 people and is, arguably, one of the most picturesque cities in Portugal. It's appeal as a tourist destination has made it the leading Portuguese port for cruise line dockings.

Which city is cheaper, Funchal or Peniche?

The average daily cost (per person) in Peniche is €98, while the average daily cost in Funchal is €75. These costs include accommodation (assuming double occupancy, so the traveler is sharing the room), food, transportation, and entertainment. While every person is different, these costs are an average of past travelers in each city. What follows is a categorical breakdown of travel costs for Peniche and Funchal in more detail.

Compare Hotels in Peniche and Funchal

Looking for a hotel in Peniche or Funchal? Prices vary by location, date, season, and the level of luxury. See below for options and compare which is best for your budget and travel style.

Hired Cars and Shuttles in Funchal

Also for Funchal, here are a few examples of actual transportation services:

Is it cheaper to fly into Peniche or Funchal?

Prices for flights to both Funchal and Peniche change regularly based on dates and travel demand. We suggest you find the best prices for your next trip on Kayak, because you can compare the cost of flights across multiple airlines for your prefered dates.

Here are some examples of typical meal expenses from previous travelers to Funchal:

For Funchal, here are some samples of tours and activities related to meals and dining experiences:

Tours and Activities in Funchal

Also, here are some specific examples of entertainment, tickets, and activities for Funchal.

Sample the Local Flavors in Funchal

Also in Funchal, these are the prices for nightlife and alcohol related activities from various tour providers:

When we compare the travel costs of actual travelers between Peniche and Funchal, we can see that Peniche is more expensive. And not only is Funchal much less expensive, but it is actually a significantly cheaper destination. So, traveling to Funchal would let you spend less money overall. Or, you could decide to spend more money in Funchal and be able to afford a more luxurious travel style by staying in nicer hotels, eating at more expensive restaurants, taking tours, and experiencing more activities. The same level of travel in Peniche would naturally cost you much more money, so you would probably want to keep your budget a little tighter in Peniche than you might in Funchal.


When is the best time to visit Peniche or Funchal?

Should I visit Peniche or Funchal in the Summer?

Both Funchal and Peniche are popular destinations to visit in the summer with plenty of activities.

Peniche is around the same temperature as Funchal in the summer. The temperature in Peniche is usually 23°C (73°F) in July, and Funchal stays around 22°C (72°F).

It's quite sunny in Funchal. The sun comes out a lot this time of the year in Peniche. Peniche usually receives more sunshine than Funchal during summer. Peniche gets 352 hours of sunny skies, while Funchal receives 227 hours of full sun in the summer.

In July, Peniche usually receives less rain than Funchal. Peniche gets 5 mm (0.2 in) of rain, while Funchal receives 10 mm (0.4 in) of rain each month for the summer.

Should I visit Peniche or Funchal in the Autumn?

Both Funchal and Peniche during the autumn are popular places to visit.

In the autumn, Peniche is around the same temperature as Funchal. Typically, the autumn temperatures in Peniche in October are around 19°C (66°F), and Funchal is about 21°C (70°F).

It's quite sunny in Peniche. In the autumn, Peniche often gets more sunshine than Funchal. Peniche gets 213 hours of sunny skies this time of year, while Funchal receives 183 hours of full sun.

Should I visit Peniche or Funchal in the Winter?

The winter attracts plenty of travelers to both Peniche and Funchal.

In January, Peniche is generally cooler than Funchal. Temperatures in Peniche average around 12°C (53°F), and Funchal stays around 16°C (61°F).

Peniche usually receives around the same amount of sunshine as Funchal during winter. Peniche gets 144 hours of sunny skies, while Funchal receives 141 hours of full sun in the winter.

Should I visit Peniche or Funchal in the Spring?

The spring brings many poeple to Peniche as well as Funchal.

Peniche is around the same temperature as Funchal in the spring. The temperature in Peniche is usually 16°C (60°F) in April, and Funchal stays around 17°C (63°F).

People are often attracted to the plentiful sunshine in Peniche this time of the year. In the spring, Peniche often gets more sunshine than Funchal. Peniche gets 235 hours of sunny skies this time of year, while Funchal receives 182 hours of full sun.

Peniche usually gets less rain in April than Funchal. Peniche gets 64 mm (2.5 in) of rain, while Funchal receives 70 mm (2.8 in) of rain this time of the year.

Typical Weather for Funchal and Peniche

Best Hostels in Madeira and Funchal for Backpackers and Solo TravellersCoimbraEvoraFaroPortimaoViseu 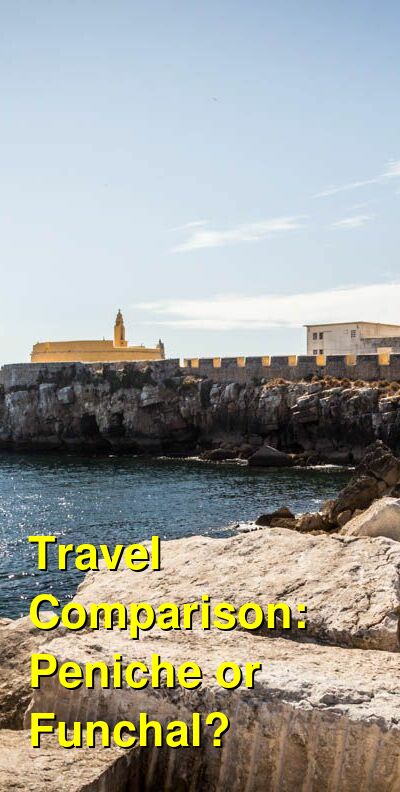