A Travel Price Comparison for United States of America San Francisco vs. Cody, Wyoming for Vacations, Tours, and Honeymoons

Should you visit San Francisco or Cody, Wyoming?

If you're trying to decide where to visit between San Francisco or Cody, Wyoming, this travel cost comparison can help. The overall cost of travel is usually a consideration when deciding where to go next, and the cost comparison below can help you decide based on the average prices from other travelers along with your own travel budget.

Named after Colonel William F. "Buffalo Bill" Cody - the man who founded the original town - Cody, Wyoming is a city that emanates the traditional Wild West. With daily shootout reenactments in the streets and regular rodeos, Cody attracts visitors from all over. It is located just outside the eastern border of Yellowstone National Park, and so has easy access to outdoor activities as well, from horseback riding like a real gunslinger to hiking in Teton National Forest.

Which city is cheaper, Cody, Wyoming or San Francisco?

The average daily cost (per person) in San Francisco is $175, while the average daily cost in Cody, Wyoming is $126. These costs include accommodation (assuming double occupancy, so the traveler is sharing the room), food, transportation, and entertainment. While every person is different, these costs are an average of past travelers in each city. Below is a breakdown of travel costs for San Francisco and Cody, Wyoming in more detail.

Double occupancy rooms typically run around $124 in Cody, Wyoming For nicer amenities and a premiere location, you can expect to pay a bit more.

To get around in Cody, Wyoming, the average visitor spends $37 per day, per person. This includes the costs of taxi rides and private drivers as well as public transportation, which tends to be much more affordable.

Is it cheaper to fly into San Francisco or Cody, Wyoming?

Prices for flights to both Cody, Wyoming and San Francisco change regularly based on dates and travel demand. We suggest you find the best prices for your next trip on Kayak, because you can compare the cost of flights across multiple airlines for your prefered dates.

The average traveler spends about $37 per day in Cody, Wyoming for food, but obviously this is dependent on the type of restaurant and the amount of food ordered. To save money you can grab a lighter lunch or dinner, or you can try fast food or street food.

In Cody, Wyoming, the costs for things to do, activities, admission tickets, and other sightseeing expenses are on average $26 per person, per day. 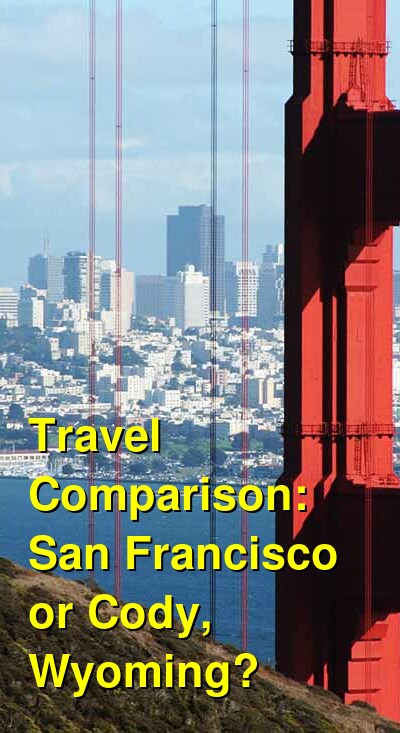