How much does it cost to travel to Phoenix?

How much money will you need for your trip to Phoenix? You should plan to spend around $114 per day on your vacation in Phoenix, which is the average daily price based on the expenses of other visitors. Past travelers have spent, on average, $42 on meals for one day and $16 on local transportation. Also, the average hotel price in Phoenix for a couple is $92. So, a trip to Phoenix for two people for one week costs on average $1,595. All of these average travel prices have been collected from other travelers to help you plan your own travel budget.

A vacation to Phoenix for one week usually costs around $797 for one person. So, a trip to Phoenix for two people costs around $1,595 for one week. A trip for two weeks for two people costs $3,189 in Phoenix. If you're traveling as a family of three or four people, the price person often goes down because kid's tickets are cheaper and hotel rooms can be shared. If you travel slower over a longer period of time then your daily budget will also go down. Two people traveling together for one month in Phoenix can often have a lower daily budget per person than one person traveling alone for one week.


How expensive is Phoenix? How much money do I need for Phoenix?

How much does a trip to Phoenix cost? Is Phoenix expensive? The average Phoenix trip cost is broken down by category here. All of these Phoenix prices are calculated from the budgets of real travelers.

How much do AirBnB's cost in Phoenix? Prices vary by location, size of the place, and the level of luxury. See below for options.

What did other people spend on Food in Phoenix?

Typical prices for Food in Phoenix are listed below. These actual costs are from real travelers and can give you an idea of the prices in Phoenix, but your costs will vary based on your travel style.

How much does it cost to go to Phoenix? Naturally, it depends on the dates. We recommend SkyScanner because they can find the best deals across all airlines.

The price of renting a car in Phoenix will depends on dates, the type of car, the location, and your age. We recommend SkyScanner because they can find the best deals across all car rental companies.

Phoenix On a Budget

Phoenix, Arizona
The most populous city in the American Southwest, Phoenix is the capital city of Arizona and busiest hub of activity in the general area. Geographically it is located in the Sonoran Desert, making for long hot summers and mild winters. This climate has ensured a thriving tourism industry with plenty of attractions both in and around Phoenix.

Phoenix is home to many sights, both indoors and out. For those seeking refuge from the hot southwestern sun, check out some of the city's best museums. The Arizona Science Center features a planetarium and IMAX theatre, the Heard Museum celebrates local Native American cultures and arts, and the Phoenix Art Museum hosts a collection of about 16,000 works of art in American, Asian, Latin American, and modern and contemporary styles.

For those who don't mind the heat, Phoenix has a plethora of outdoor attractions as well. The Phoenix Zoo is the largest privately owned, non-profit zoo in the United States, placing an emphasis on animal conservation, often breeding and reintroducing endangered species back into the wild. Next to the zoo, visitors can also see the Phoenix Botanical Gardens, acclaimed worldwide for their exhibits and educational programs, with the largest collection of arid plants in the United States. South Mountain Park is another great stop for experiencing a preserved desert mountain environment.

Pueblo Grande Museum and Archaeological Park is also of interest for anyone wanting to channel their inner Indiana Jones. It is the only city-operated archaeological site in the U.S., showcasing ancient pre-Columbian Hohokam inhabitants of the area. There are too many sights within and around the city to name them all, but a few additional items of note include the Japanese Friendship Garden, Historic Heritage Square, Phoenix Mountains Park, Tovrea Castle, Camelback Mountain, Hole in the Rock, Mystery Castle, St. Mary’s Basilica, Taliesin West, and the Wrigley Mansion.

Greater Phoenix is divided into seven districts: Downtown, Midtown, West Phoenix, North Phoenix, South Phoenix, Camelback East, and Ahwatukee. Downtown is the center of activity, especially for visitors, spanning 2-3 square miles and a few main thoroughfares-Central Avenue and Washington and Jefferson Streets. Midtown is home to a number of historic neighborhoods as well as several cultural, performance, and sporting venues. West Phoenix has seen some urban decline except for its Cricket Pavilion concert venue, while North Phoenix is a good home base for hiking and outdoor activities. South Phoenix is another district that has seen decline, but is home to South Mountain Regional Park-the largest municipal park in the country. And finally, both Camelback East and Ahwatukee are upscale districts, with Camelback East being home to the Phoenix Zoo and world class resorts.

Being the largest, most populous city of the general area, Phoenix is host to a wide range of activities both within and without. The arts and entertainment scene is alive with opportunities to enjoy opera, symphony, theatre, and a number of festivals held throughout the year. Historic sites and museums are abundant, as are opportunities to get outdoors and enjoy hiking in a unique desert environment.

There are also many sites of interest just outside the city, some of which include National Monuments like Agua Fria, Casa Grande Ruins, and Organ Pipe Cactus, as well as other destinations like Lost Dutchman State Park, Montezuma’s Castle, and Montezuma’s Well.

If you're looking for adventure or relaxation, you should do a day trip or weekend trip out of Phoenix to go Whitewater Rafting in Arizona. A variety of types of trips are available from relaxing floats to adrenaline-filled rapid-cresting adventures.

Plenty of hotel options can be found in the Phoenix area at all price ranges. The central area of downtown tends to have the highest priced hotels. Cheaper accommodation can be found on the outskirts of the city. Another option is to find an AirBnB in Phoenix, too.

Like much of Arizona, Phoenix is known for its huge spicy plates of Southwestern food. Most dishes are based in a spicy sauce made from red or green chili peppers, or a mix of both. Typical dishes of the American southwest that most people are familiar with include items like burrito, chimichanga, enchilada, fajitas, nachos, chili con carne, chili con queso, quesadilla, stuffed peppers, tacos, and tostados, many of which are often served with sides of rice and beans and salsa or guacamole. Arizona is actually the home of the chimichanga-a deep-fried burrito. Cactus is also popular, either fried or in salads. When in Arizona it's best to take advantage of the abundance of authentic southwestern food, though there are additionally plenty of standard chain restaurants and other fare in Phoenix for the less adventurous palette.

If you're flying into Phoenix, Phoenix Sky Harbor International Airport is the main way of entry. The airport is a main hub for both American Airlines and Southwest Airlines, and is served by many other airlines from three main terminals. From the airport there are buses, a sky rail, and low-cost shuttles to downtown Phoenix. The next best option for flying is Phoenix-Mesa Gateway Airport located east of Phoenix in Mesa. Within the United States, visitors can also arrive by car or bus. 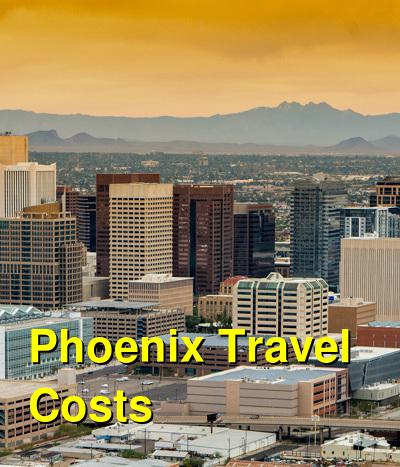