A Travel Price Comparison for New Zealand Te Anau vs. Dunedin for Vacations, Tours, and Honeymoons

Should you visit Te Anau or Dunedin?

Trying to figure out where to travel next? This travel comparison between Te Anau and Dunedin can help. It includes a travel cost comparison in addition to other factors. For many travelers, the cost of a destination is a primary consideration when choosing where to go.

Where Should I go: Te Anau or Dunedin?

Te Anau is a town on the South Island of New Zealand, best-known as a gateway to Fiordland National Park and Milford Sound. The region is a major destination for ecotourism as it is home to rare species like the endangered flightless takahe bird and natural features like caves, waterfalls, forests, lakes, glacial valleys, and mountains.

Dunedin is the second largest city on the South Island of New Zealand. It is situated on the southeast coast and is largely Scottish in its heritage. It is part of the Otago region and has mild temperatures during the spring and summer, but extremely cold temperatures during the end of fall and winter. Dunedin is a university town; The University of Otago is the oldest in New Zealand, established in 1869. The students make up over a tenth of the entire city's population.

Which city is cheaper, Dunedin or Te Anau?

The average daily cost (per person) in Te Anau is $83, while the average daily cost in Dunedin is $86. These costs include accommodation (assuming double occupancy, so the traveler is sharing the room), food, transportation, and entertainment. While every person is different, these costs are an average of past travelers in each city. What follows is a categorical breakdown of travel costs for Te Anau and Dunedin in more detail.

Looking for a hotel in Te Anau or Dunedin? Prices vary by location, date, season, and the level of luxury. See below for options and compare which is best for your budget and travel style.

Also for Te Anau, here are a few examples of actual transportation services:

Hired Cars and Shuttles in Dunedin

Some specific examples of transportation prices in Dunedin:

Is it cheaper to fly into Te Anau or Dunedin?

Prices for flights to both Dunedin and Te Anau change regularly based on dates and travel demand. We suggest you find the best prices for your next trip on Kayak, because you can compare the cost of flights across multiple airlines for your prefered dates.

Tours and Activities in Te Anau

For Te Anau, here are a few prices for actual activities, tours, and tickets provided by various companies:

Tours and Activities in Dunedin

Here are a few actual costs in Dunedin for available activities, ticket prices, and tours:

Sample the Local Flavors in Dunedin

Here are a few nightlife and alcohol tours and activities from local tour providers in Dunedin:

When comparing the travel costs between Te Anau and Dunedin, we can see that Dunedin is more expensive. However, the two cities are actually relatively comparable in price, as the difference is somewhat minimal. Generally, this means that you could travel with generally the same travel style and level of luxury in each place. Since both cities are in Pacific, it's no surprise that their costs are relatively close, as many destinations here have somewhat similar travel prices overall.

Reviews of the Best Hostels in Dunedin for Backpackers, Solo Travellers, Couples, and FamiliesNelsonNapierTaupoQueenstownPicton 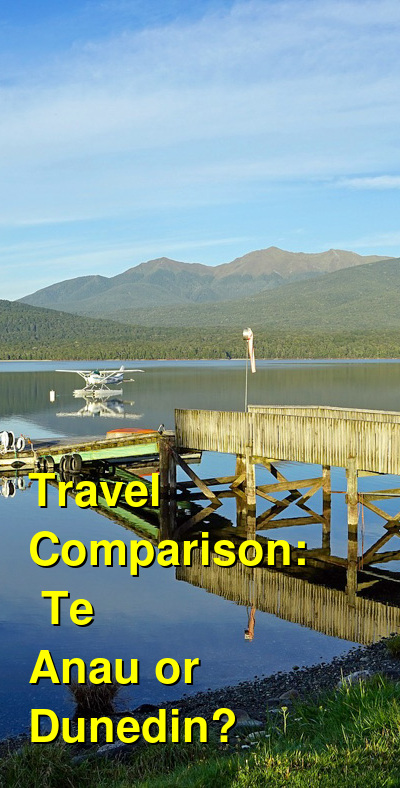