How much does it cost to travel to Cape Sounion?

How much money will you need for your trip to Cape Sounion? You should plan to spend around €126 ($144) per day on your vacation in Cape Sounion, which is the average daily price based on the expenses of other visitors. Past travelers have spent, on average, €33 ($38) on meals for one day and €21 ($23) on local transportation. Also, the average hotel price in Cape Sounion for a couple is €158 ($180). So, a trip to Cape Sounion for two people for one week costs on average €1,766 ($2,016). All of these average travel prices have been collected from other travelers to help you plan your own travel budget.

How much do vacation rentals cost in Cape Sounion? Prices vary by location, date, size of the place, and the level of luxury. See below for options.

How much does it cost to go to Cape Sounion? Naturally, it depends on the dates. We recommend Kayak because they can find the best deals across all airlines.

The price of renting a car in Cape Sounion will depends on dates, the type of car, the location, and your age. We recommend Kayak because they can find the best deals across all car rental companies.

Cape Sounion On a Budget 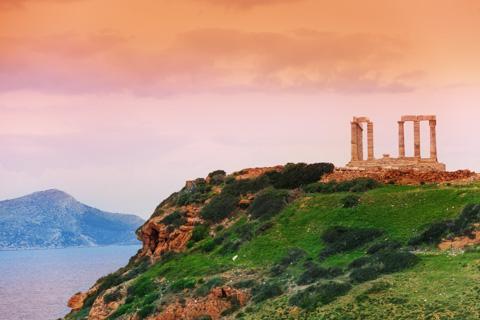 Cape Sounion, Greece
Cape Sounion encompasses the southernmost tip of the Attica peninsula of Greece with views of the sea wherever you go. The land of the mythological god Poseidon, Sounion's striking promontory houses his temple that still stands today. It overlooks the Aegean Sea, which was named for King Aegeus of Athens. Aegeus had leapt off of these very cliffs thinking his son Theseus had been killed by the Minotaur of Crete. The promontory and temple are very significant to Greek mythology and history, and was even referenced in Homer's poem, the Odyssey.

Today, the site at Cape Sounion is a world-renowned tourist attraction as well as an upscale summer home location for Athenians. A drive around the coast will reveal many villas and condos that were constructed in the 1960s and 70s. Sounion is also one of the most expensive areas in Greece, with the value of some homes exceeding twenty million euros. Hotel rates are also more expensive than anywhere else in Greece.

The main attraction at Cape Sounion is of course the Temple of Poseidon. While his bronze statue is now housed in the National Archaeology Museum in Athens, the presence of the surrounding sea is enough to know on whose grounds you stand. The most popular time of day to visit the temple is at sunset. As you stand on the cliffs with the Doric columns massive and strong at your back, it feels as if you stand with Poseidon himself-watching his seas swallow up the sun in a sweeping wash of color in the sky. Sunset, however, does draw the crowds, so if you are looking to visit in peace and quiet, the early morning hours are your best bet.

The temple was erected by Pericles, during the Golden Age of Greece, and is said to be on top of the ruins of an earlier sea temple which may date back to Mycenaean or Minoan times. If you look close enough at the base of the columns, you may even be able to descry the inscribed name of the famous Romantic poet Lord Byron, whose carving possibly dates from his first visit to Greece, before he acquired his fame.

In ancient times the temple was the last sign of civilization the Athenians saw as they sailed away from home and the first as they returned, making it a very important landmark to native Greeks.

As you travel from Athens to Sounion down GR-89, the closest town before you reach the cape is Lavrio. Famous for silver mining in classical antiquity, the residential town is now home to a small sea port. The gridded streets that surround the port are bustling with markets by day and restaurants, tavernas, and bars by night. Lavrio does not, however, have any hotels, so if you are looking for a place to stay you will have the best luck traveling further south. The Saron Hotel is an affordable and comfortable option, walking distance from the nearest beach, with pool access and breakfast included. If you want something a little more luxurious, try the Aegean Beach Hotel just below the temple, or the even more upscale Cape Sounio, which looks like a temple itself.

Once you have seen and explored the Temple of Poseidon, the second best attractions of the area are the beaches. The beach near the Saron Hotel is fairly quiet with a small cafe, though the sand can be stinging if you hit this spot on a windy day. There is also a campground nearby called Camping Bacchus if you prefer penny-saving accommodations.

One of the better beaches is the stretch located at the base of the temple's promontory. Following the drive down to the Aegean Beach Hotel you will find parking for the beach. While the hotel does control about 90% of the beach, the water here is clear and beautiful and no one will stop you from laying out a towel on the beach's edge. If you would like to use the hotel's umbrellas or chairs there will be a small fee. Whether you prefer to take a dip in the crystal waters, soak up the sun, or hunt for treasures like sea glass and shells-this beach will satisfy every single one of those desires, with a view of Poseidon's looming cliffs to boot!

Located at the end of the beach, near the Aegean Beach Hotel, are two tavernas serving the traditional Greek fare. Being as close as you can get to a Greek Island without actually being on an island, the seafood is as fresh as can be. Either one is a perfect spot to take a break from the heat of the day and enjoy a meal.

The best food in the area, however, will probably be found in the port town of Lavrio mentioned earlier. Here you will find a large selection of lively ouzeris and tavernas serving all kinds of seafood and traditional Greek cuisine.

The journey from Athens to Cape Sounion is an easy drive down by rental car or taxi, and is a convenient method if you want to stop along the way or go back and forth between Sounion and Lavrio.

The buses that run along the coast leave every hour on the half hour from the bottom of Pedion Areos at the intersection of Pattision Street and Alexandras Ave, just beyond the National Archaeological Museum. It can also be boarded on Fileninon Street a block or so from Syntagma Square. The bus ride should take about 2 hours at most.