How much does it cost to travel to Jakarta?

How much money will you need for your trip to Jakarta? You should plan to spend around Rp824,603 ($58) per day on your vacation in Jakarta, which is the average daily price based on the expenses of other visitors. Past travelers have spent, on average, Rp214,904 ($15) on meals for one day and Rp263,962 ($19) on local transportation. Also, the average hotel price in Jakarta for a couple is Rp851,451 ($60). So, a trip to Jakarta for two people for one week costs on average Rp11,544,441 ($812). All of these average travel prices have been collected from other travelers to help you plan your own travel budget.

A vacation to Jakarta for one week usually costs around Rp5,772,221 for one person. So, a trip to Jakarta for two people costs around Rp11,544,441 for one week. A trip for two weeks for two people costs Rp23,088,882 in Jakarta. If you're traveling as a family of three or four people, the price person often goes down because kid's tickets are cheaper and hotel rooms can be shared. If you travel slower over a longer period of time then your daily budget will also go down. Two people traveling together for one month in Jakarta can often have a lower daily budget per person than one person traveling alone for one week.


How expensive is Jakarta? How much money do I need for Jakarta?

How much does a trip to Jakarta cost? Is Jakarta expensive? The average Jakarta trip cost is broken down by category here. All of these Jakarta prices are calculated from the budgets of real travelers.

Find a hostel, guesthouse, or B&B in Jakarta

What did other people spend on Hotels in Jakarta?

Typical prices for Accommodation in Jakarta are listed below. These actual costs are from real travelers and can give you an idea of the prices in Jakarta, but your costs will vary based on your travel style.

What did other people spend on Food in Jakarta?

Typical prices for Food in Jakarta are listed below. These actual costs are from real travelers and can give you an idea of the prices in Jakarta, but your costs will vary based on your travel style.

How much does it cost to go to Jakarta? Naturally, it depends on the dates. We recommend SkyScanner because they can find the best deals across all airlines.

The price of renting a car in Jakarta will depends on dates, the type of car, the location, and your age. We recommend SkyScanner because they can find the best deals across all car rental companies.


What did other people spend on Transportation in Jakarta?

Typical prices for Transportation in Jakarta are listed below. These actual costs are from real travelers and can give you an idea of the prices in Jakarta, but your costs will vary based on your travel style.

What did other people spend on Water in Jakarta?

Typical prices for Water in Jakarta are listed below. These actual costs are from real travelers and can give you an idea of the prices in Jakarta, but your costs will vary based on your travel style.

The 4 Best Hostels in JakartaSurabayaBandung

Jakarta On a Budget

Jakarta, Indonesia
As Indonesia's capital and largest city, Jakarta rests on the northwest coast of the island of Java. It is the country's economic, cultural, and political center with plenty of opportunities for sightseeing, nightlife, shopping, and entertainment.

For those interested in landmarks, there are a few iconic monuments that are unique to Jakarta. In the city's main square there is the Monas (or National Monument), a tower from which visitors can view the entire city. The Presidential Palace just North of the monument is also worth a visit, free and open to the public on weekends.

Additionally, there is a long list of museums dedicated to the history, art, and culture of the nation. Some of these include the Gedung Kesenian Jakarta (or Jakarta Arts Theater), National Gallery of Indonesia featuring work from both Indonesian and foreign artists, Textile Museum dedicated to the religious and social significance of textile-making on the islands, and Museum Wayang which showcases the traditional art form of puppetry in Indonesia.

Religious sites like mosques and cathedrals are also well-visited. Istiqlal Mosque, for example, is the biggest mosque in Southeast Asia with a capacity of 120,000, located near the Monas Square. Visitors must remove their shoes and tours in English are available. Jakarta Cathedral is also well-known - a Dutch colonial Neo-Gothic Roman Catholic cathedral, and the seat of the Bishop of Jakarta. There is a museum attached to the Cathedral on the top floor.

Other attractions include theme parks like Ancol Dream Park located on the coast, and a zoo called Regunan Zoo which features some 3,600 species of wildlife from throughout Indonesia.

Jakarta is divided into several districts, which include Central Jakarta, West Jakarta, South Jakarta, East Jakarta, North Jakarta, and Thousand Islands. Central Jakarta is the administrative and financial heart of the city as well as the location of the world's largest city square "Lapangan Merdeka," the presidential palace, Istiqal Mosque, Jakarta Cathedral, the National Museum of Indonesia, and the iconic Hotel Indonesia traffic circle (Bundaran HI) around which the top malls are located. West Jakarta is considered to be the old town area with Dutch colonial buildings, street food, craft vendors, a few museums, and Jakarta's Chinatown known as Glodok. South Jakarta encompasses upper-middle class and elite residences as well as businesses including shopping centers, restaurants, hotels, nightclubs, and boutique shops. East Jakarta is the industrial quarter, while North Jakarta is the harbor as well as the gateway to the final district - the Thousand Islands. Located right on the coast, North Jakarta is a destination known for its seafood and beachside entertainment, while the Thousand Islands just offshore includes islands that are a part of a Marine National Park as well as excellent diving sites. There are also several satellite cities important to the area such as Bogor, Tangerang, Bekasi, and Depok.

If you're not sure about accommodations, check out this guide to where to stay in Jakarta which covers plenty of good hotels. Or, check out our article on the best hostels in Jakarta.

Sightseeing the historical, cultural, and religious landmarks of the city can occupy one's time in the city, as well as the many opportunities for shopping. Historical markets like the Pasar Baru dot the city for a unique trading experience, while there are plenty of malls, especially around Bandaran HI for all shopping needs. Visitors often experience the city's theme parks and frequent the movie theaters, while there are also a number of sporting events and musical festivals throughout the year, like the Jakarta International Java Jazz Festival.

As a major city, Jakarta has a vast range of dining possibilities, from local fare to international options. Some of the more popular regional dishes include things like:

Street foods are also very common, with each district of Jakarta having its own unique flavors. Some of the best places for street food include Kelapa Gading, Muara Karang in Pluit, Kebon Kacang in Central Jakarta, and Blok S in South Jakarta.

The nearest major airport is Soekarno Hatta International Airport, located 20 kilometers (12 miles) northwest of the city at Tangerang, Banten. In order to reach the city from here the best option is to arrange a pick-up from your hotel, as many hotels in Jakarta provide free airport transfers. Ride services like Uber, GoJek, and Grab are also frequently used. Transportation can be arranged with these companies on a mobile device using the airport's free WiFi. Taxis can be tricky, as many will try to scam visitors; however, Silver Bird, Blue Bird, and Express Taxi are among the more reliable taxi services in Jakarta. DAMRI shuttles buses are also available and connect to many Jakarta destinations. Trains and buses additionally connect Jakarta to outlying locations as well. 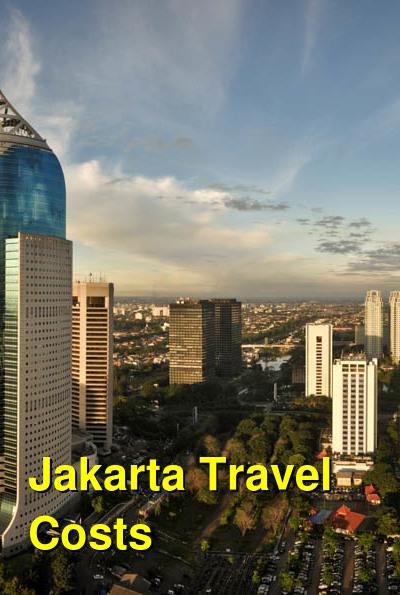