How much does it cost to travel to Pisa?

How much money will you need for your trip to Pisa? You should plan to spend around €96 ($101) per day on your vacation in Pisa, which is the average daily price based on the expenses of other visitors. Past travelers have spent, on average, €40 ($42) on meals for one day and €8.77 ($9.25) on local transportation. Also, the average hotel price in Pisa for a couple is €96 ($101). So, a trip to Pisa for two people for one week costs on average €1,342 ($1,415). All of these average travel prices have been collected from other travelers to help you plan your own travel budget.

A vacation to Pisa for one week usually costs around €671 for one person. So, a trip to Pisa for two people costs around €1,342 for one week. A trip for two weeks for two people costs €2,684 in Pisa. If you're traveling as a family of three or four people, the price person often goes down because kid's tickets are cheaper and hotel rooms can be shared. If you travel slower over a longer period of time then your daily budget will also go down. Two people traveling together for one month in Pisa can often have a lower daily budget per person than one person traveling alone for one week.


How expensive is Pisa? How much money do I need for Pisa?

How much does a trip to Pisa cost? Is Pisa expensive? The average Pisa trip cost is broken down by category here. All of these Pisa prices are calculated from the budgets of real travelers.

How much do vacation rentals cost in Pisa? Prices vary by location, date, size of the place, and the level of luxury. See below for options.

How much does it cost to go to Pisa? Naturally, it depends on the dates. We recommend Kayak because they can find the best deals across all airlines.

The price of renting a car in Pisa will depends on dates, the type of car, the location, and your age. We recommend Kayak because they can find the best deals across all car rental companies.

What did other people spend on Food in Pisa?

Typical prices for Food in Pisa are listed below. These actual costs are from real travelers and can give you an idea of the prices in Pisa, but your costs will vary based on your travel style.

Best Hostels for Solo Travellers, Backpackers, and Groups in PisaAffordable, Quiet, and Safe Hostels and Bed and Breakfasts in Pisa, ItalyFlorenceLivornoLuccaSiena

Pisa On a Budget 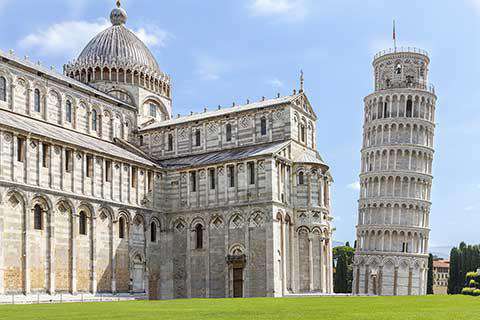 The Cathedral and Leaning Tower of Pisa, Italy
Located in Tuscany, Pisa is most famous for its Leaning Tower. The city has a population of about 100,000 people and there are a surprising number of impressive sights that you might miss if you simply pass through to see the tower. There are many architectural and artistic sights that make the city noteworthy as well. The atmosphere of Pisa is also influenced by its university. Of the 100,000 person population, about 60,000 are students. The students bring the city to life with many parties, shows, and interesting cultural events. They stay active into the night and entertainment options are not limited. The student presence is most obvious once you're outside of the touristy Campo dei Miracoli.

There are a surprising number of sights in Pisa aside from the obvious Leaning Tower. Make sure you visit the Duomo di Pisa, Battistero, Campo Santo Monumentale, Museo del Opera del Duomo, Museo delle Sinopie, Palazzo della Carovana, Palazzo dell'Orologio, Chiesa di Santo Stefano among many other sights. If you're interested in the beach, check out this guide to visiting the Leaning Tower of Pisa and Marina di Pisa beach.

Pisa was first settled on the northern shore of the river Arno. Today's city center is divided into two major districts and four historical quarters. Santa Maria, San Francesco, Sant' Antonio and San Martino are in the area enclosed by the 12th century city walls.

The Piazza dei Miracoli, or Field of Miracles is in the northern part of the city. It's a UNESCO World Heritage site and where many tourists spend the majority of their time. It is also where you'll find the Leaning Tower.

The Luminara Festival is a popular event in the city. It's held on June 16th for patron saint's day. At sunset the lights along the Arno dim and there are more than 10,000 candles lit. It's an impressive sight and worth visiting if you're in town. Gioco del Ponte is another summer event. It's held the last Sunday of June and is a historical reinactment of a procession and competition. Because of the active student body, there is also no shortage of nightlife around town. Clubs and music are abundant and active during the school year.

As with most touristy towns, it is best to go outside of the main tourist sections to find a restaurant. In particular, avoid eating near the Leaning Tower as the quality of the food is low and the prices are quite high. Instead, make your way to the central part of town which is about a five or ten minute walk from Piazza di Miracoli. The restaurants in the area are affordable and good. You'll find many reasonably priced cafeterias near the vegetable market in Piazza delle Vettovaglie. Another great area to eat is Via San Martino near the south bank of the river. Prices here are also low, but the food is fresh and good.

If you do want to eat near the Leaning Tower then there's a decent Indian Restaurant in Via Roma. A restaurant style pizzeria called Kinzica is also located in Piazza dei Miracoli. It's reasonably affordable and decent quality. For chocolates and sweets go to Salza, in Borgo Stretto. Although the prices are high, they are a special treat that you shouldn't miss.

It's easy to reach Pisa from Florence by train, especially if you're coming from Florence to Pisa for a half-day trip. There are about three connections per hour and there are also hourly connections to Lucca. Regular buses also make the trip. The main train station in town is Pisa Centrale. There you will find a left luggage service that is open from 6 am to 9 pm. This is convenient if you are passing through the city in route to another place. If you're coming to town specifically to see the Tower then you can take the train to the Pisa S. Rossore train station that is more conveniently located closer to the Tower. Make sure that your specific train stops at this station, as not all do.

Once you're in town there is a convenient and efficient bus system. Buses connect the train station to the Field of Miracles and most attractions can easily be walked to in about a half an hour. You can buy bus tickets at local tobacco shops or from vendoring machines that are found in the stations and at the airport. If you're hoping to travel around Tuscany in a private car, then there are many rental car agencies at the airport. You'll need to take a shuttle bus from the airport to the rental offices though. This shuttle can be caught near the airport's arrival hall by the city bus stop. You do not need a car within the city, but a private vehicle can make off the beaten path excursions more convenient elsewhere in Tuscany.