How much does it cost to travel to Cinque Terre?

How much money will you need for your trip to Cinque Terre? You should plan to spend around €110 ($124) per day on your vacation in Cinque Terre, which is the average daily price based on the expenses of other visitors. Past travelers have spent, on average, €33 ($37) on meals for one day and €12 ($14) on local transportation. Also, the average hotel price in Cinque Terre for a couple is €113 ($127). So, a trip to Cinque Terre for two people for one week costs on average €1,544 ($1,733). All of these average travel prices have been collected from other travelers to help you plan your own travel budget.


How expensive is Cinque Terre?

How much does it cost to go to Cinque Terre? Naturally, it depends on the dates. We recommend SkyScanner because they can find the best deals across all of the airlines.


How much money do I need for Cinque Terre?

How much do tours to Cinque Terre cost? Multi-day tours can often be an effecient way to see the highlights of a country or region.

How much do AirBnB's cost in Cinque Terre? Prices vary by location, size of the place, and the level of luxury. See below for options.

Cinque Terre On a Budget 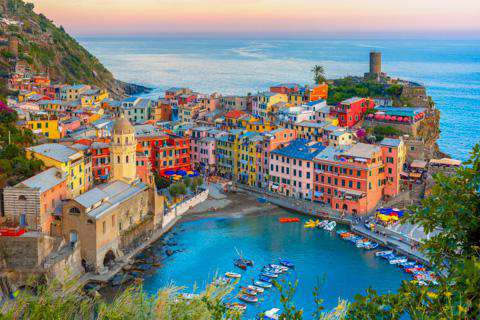 Vernazza in Cinque Terre
Located on the rugged Italian Riviera coastline, Cinque Terra consists of five seaside villages exuding a charm that dates back to medieval times. Fishing boats bob in the harbors, bringing fresh seafood to the tables of the region, while age old vineyards make for fragrant signature wines. Cinque Terre is considered to be a National Park, with its five villages earning a spot on the UNESCO World Heritage List for their beauty and timelessness.

The five villages of Cinque Terre string along the northwestern Italian coast, from Monterosso furthest north, to Riomaggiore furthest south. While all are quaint and reminiscent of an old world time and place, each town has a little something different to offer. Once within the vicinity, no cars are permitted, so visitors can either take the train from village to village or walk the hiking trails. The Sentiero Azzurro, or Blue Trail, is the walking trail that connects the five villages.

The most modern and developed of the five, Monterosso is actually divided into two towns split by a short road tunnel-the old and the new. New Monterosso is the most touristed of the villages, boasting a large sandy (or pebbly) beach with all of the amenities and beach-side restaurants and cafes. There are also plenty of upscale hotels and modern apartments, plus a statue at the end of the beach that cannot be missed. Like the colossal Atlas who holds the world on his back, this statue holds up one of the village's terraces. The old part of town is similar to the other villages of Cinque Terre, quaint and historic though larger and less steep with a number of boutiques and other shops. Monterosso can be easily explored on foot with links to the other village by train or hiking trails.

Vernazza is the next of the Cinque Terre villages below Monterosso. It is perhaps the most picturesque of the five with an impressive seaside church and ancient castle overlooking a lovely little harbor below. The rustic church near the waterfront is worth a look, and an excellent view of the area can be seen with a short walk up to the top of the castle. The main street from the train station to the harbor is beautifully cobbled and lined with colorful buildings that house small shops, cafes, and residences. This street branches off into a maze of smaller ones that can only be explored on foot. Other features of Vernazza include two clock towers, a small beach with a roped area for swimming, a public area with tables and umbrellas, as well as a lively night life scene. Prevo, a hamlet of Vernazza, is another great spot to hike to, offering incredible views from the highest part of the Sentiero Azzurro at 208 meters above sea level.

The third and highest of the five villages, Corniglia is placed atop a steep promontory with a small stone beach on either side down below. From the train station, a path rises steeply to reach the town at 300 feet above the Ligurian Sea. It is the only one of the towns not near the sea, its height making it feel smaller and quieter than the others. The climb to reach it goes up 365 steps and is very fragrant, especially in spring when the lemon and olive trees, grapevines, lilies, and other vegetation are all in full bloom. Along the trail there are many places to stop with picturesque views of the neighboring village of Manarola. Once at the top, a small street called Via Fieschi winds through town, lined with a number of bars, cafes, and shops selling local products. S. Pietro church is one of Corniglia's most important sights dating back to the early 1500s, with architecture conserving parts from an earlier 11th Century church. Continue along a path past the church for some of the best views of Manarola.

One of the more colorful towns, Manarola boasts a village of buildings painted with the bright colors of a sunset. Leading down to turquoise seas, the lower part of town is filled with boats of all kinds. To reach the town from the train station, you must pass through an underground tunnel, which was once a safe haven for villagers during World War II. As you walk through the tunnel and out up the hill into town you will pass a gallery selling oil paintings and watercolors of the villages, an old waterwheel as the road used to be a stream, and finally the church of S. Lorenzo at the top. Other features include a vineyard walk, the Monarola Cemetery, the harbor, town center, and a web of alleys and hiking paths to explore. There are also a number of coastline caves and secluded swimming holes nearby.

Riomaggiore marks the southernmost village of the five towns. The main street that runs through town is called Via Colombo and it is lined with most of the main amenities, restaurants, bars, cafes, gelato, and guest houses. There are also a number of shops selling fresh local goods like fruits, an assortment of salami, cheeses, and olives. Walk towards the sea and the street will take you to Riomaggiore's marina, offering gorgeous views of the water below. The town is also home to an ancient stone castello that dates back to the mid-500s. While it was originally built to protect citizens from any seaborne attacks, much of the original structure was destroyed and its remaining structure now serves as a monument of the National Park of Cinque Terre.

Cinque Terre boasts some of the best coastline hiking trails in the world. As mentioned before, it is possible to hike from one village to the next along the Sentiero Azzurro, or Blue Trail (a.k.a. Trail No 2), though there are a number of others with varying views and degrees of difficulty. For the experienced hiker there are trails that go higher up the mountain, while those wary of the journey on foot have the option of using the boat ferry services that runs seasonally to all five villages. The average hiking times between each village along the Blue Trail goes as follows (but be aware that times will vary based on a person's fitness level):

Some parts of this trail might also be closed due to seasonal weather, construction, or other reasons. There are alternative routes, though this might also vary the estimated hike time.

Other activities in Cinque Terre beyond hiking include taking in the beautiful seaside views, exploring the sights and culture of each village, and swimming on any one of Cinque Terre's varying beach areas. There are two large sandy beaches at Monterosso, a small sandy beach at the harbor of Vernazza, and pebble beaches near Riomaggiore and Corniglia. There are also some beaches off the beaten path and rocks for diving into the Mediterranean waters.

The towns with beaches sometimes offer snorkeling and kayak or rowboat boat rentals.

The cuisine of Cinque Terre remains traditional and highly influenced by the local fruits of land and sea. With grapevines and olive trees covering the steep hillsides, wine and olive oil are always present at any meal. Trofie is a kind of pasta made from chestnut or wheat flour, and is often accompanied by a pesto made with basil leaves, extra virgin olive oil, grated cheese, pine nuts, and marjoram. Tagliatelle is another kind of homemade pasta, also served with pesto or a sauce containing mushrooms, cabbage and potatoes, beans, and chickpeas.

Beyond pasta there are vegetable pies that involve combining local herbs with artichokes, swiss chard, zucchini, potatoes, and leeks plus egg, ricotta cheese and other ingredients depending on the recipe. And then there is the seafood. Being so close to the sea, the villages of Cinque Terre offer fresh catches can be made into dishes like stewed cuttlefish, stuffed calamari, and spiced octopus. Mussels can also be stuffed, stewed, or baked while anchovies and sardines are served with lemon, olive oil, and fresh crusty bread. Cinque Terre is also known for its dry white wine, a sweet dessert wine called Sciacchetra, and a lemon dessert wine called limoncino. There are a number of good restaurants in each of the villages.

Cinque Terre Car Rental Prices
Compare prices across all major rental companies:
The nearest airports are in Pisa at the Pisa Galileo Galilei Airport and in Genoa at the Genoa Cristoforo Colombo Airport. Florence Airport is another good option, as is MilanMalpensa Airport in Milan.

The Cinque Terre villages are well connected by rail and each of the villages has a train station, though some are only served by local trains. Regular local trains from Genova and La Spezia run often. All trains are operated by Trenitalia. The stations in Cinque Terre are: Monterosso al Mare, Vernazza, Corniglia, Manarola and Riomaggiore.

By car it is best to approach from the city of La Spezia. Take the A370 and follow signs for Cinque Terre, taking about 20-30 to reach the nearest of the five villages.