How much does it cost to travel to Palermo?

How much money will you need for your trip to Palermo? You should plan to spend around €74 ($90) per day on your vacation in Palermo, which is the average daily price based on the expenses of other visitors. Past travelers have spent, on average, €23 ($28) on meals for one day and €4.51 ($5.47) on local transportation. Also, the average hotel price in Palermo for a couple is €90 ($109). So, a trip to Palermo for two people for one week costs on average €1,036 ($1,255). All of these average travel prices have been collected from other travelers to help you plan your own travel budget.

A vacation to Palermo for one week usually costs around €518 for one person. So, a trip to Palermo for two people costs around €1,036 for one week. A trip for two weeks for two people costs €2,072 in Palermo. If you're traveling as a family of three or four people, the price person often goes down because kid's tickets are cheaper and hotel rooms can be shared. If you travel slower over a longer period of time then your daily budget will also go down. Two people traveling together for one month in Palermo can often have a lower daily budget per person than one person traveling alone for one week.


How expensive is Palermo? How much money do I need for Palermo?

How much does a trip to Palermo cost? Is Palermo expensive? The average Palermo trip cost is broken down by category here. All of these Palermo prices are calculated from the budgets of real travelers.

Find a hostel, guesthouse, or B&B in Palermo

What did other people spend on Food in Palermo?

Typical prices for Food in Palermo are listed below. These actual costs are from real travelers and can give you an idea of the prices in Palermo, but your costs will vary based on your travel style.

How much does it cost to go to Palermo? Naturally, it depends on the dates. We recommend SkyScanner because they can find the best deals across all airlines.

The price of renting a car in Palermo will depends on dates, the type of car, the location, and your age. We recommend SkyScanner because they can find the best deals across all car rental companies.

What did other people spend on Transportation in Palermo?

Typical prices for Transportation in Palermo are listed below. These actual costs are from real travelers and can give you an idea of the prices in Palermo, but your costs will vary based on your travel style.

What did other people spend on Entertainment in Palermo?

Typical prices for Entertainment in Palermo are listed below. These actual costs are from real travelers and can give you an idea of the prices in Palermo, but your costs will vary based on your travel style.

What did other people spend on Alcohol in Palermo?

Typical prices for Alcohol in Palermo are listed below. These actual costs are from real travelers and can give you an idea of the prices in Palermo, but your costs will vary based on your travel style.

Palermo On a Budget 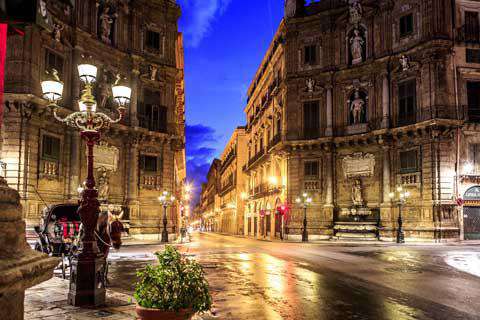 Palermo, Italy
Located on its north coast, Palermo is the capital city of Sicily. The city has a lot to offer visitors who decide to venture to this often overlooked part of Italy. There is an interesting history, some unique and delicious food, and a fascinating culture. Prices in Sicily are generally cheaper than elsewhere in Italy. There are a handful of budget accommodation options and plenty of mid range hotels that are spread throughout the city. The rooms are usually comfortable and clean but as always, read reviews before making your reservation.

Although Palermo is probably not the first city that comes to mind when you plan a trip to Italy, it offers a unique and different perspective on the country. Despite its lack of fame as a tourist destination, there are many historic and impressive sights throughout the city such as Quattro Canti, Catacombe dei Cappuccini, Palazzo dei Normanni, and the Gesu Church. If you want to see some of the city's Art-Nouveau then head to the area of Viale della Liberta Avenue and wander between the Politeama Theater and Piazza Croci. This area is referred to as Palermo's Avenue des Champs-Elysees.

Palermo's layout was established during medieval times. There are three outdoor markets that date back hundreds of years and create the boundaries of the area. There are also four historical districts that are referred to as mandamenti. These areas each have their own historic character.

Notable neighborhoods today include La Kalsa, which was the Arabic headquarters. It still maintains its Arabic character today.

La Vucciria was once at the vibrant heart of the city but today it has mainly butcher shops, fishmongers and old houses. It is a great place to grab a bite to eat.

Il Ballaro was another historic market that is still popular with locals and visitors alike.

Il Capo is a market with a lot of character remaining. There are winding streets and alleyways that give it the feel of a bazaar. Notable sights in this neighborhood include Teatro Massimo, Chiesa di Sant'Agostino and Chiesa dell'Immacolata Concezione.

Albergheria is the fourth mandamenti and it has wandering alleyways, interesting buildings, and some new cafes spread throughout.

Castellammare is named for the castle that once overlooked the sea, but is home today to a handful of sights.

Finally, the New City has many impressive squares, some of the wealthiest parts of the city, and the area where the Art Nouveau movement took over.

Activities in Palermo include dining at the interesting restaurants, wandering around the city or taking a sailboat cruise. These cruises let you enjoy sightseeing from the water, snorkeling, drinking, eating and soaking up some sun. If you have some spare time while you're in town then they can be a different way to experience Sicily.

Food in Sicily is somewhat different from elsewhere in Italy. You should definitely make a point of trying some of the regional specialties. Spaghetti ai ricci is a pasta dish that is prepared with sea urchin. Pasta alle sarde is pasta with anchovies, and arancine is a street food that is essentially a deep fried rice croquette. Also be sure and try the panino con la milza or panelle. These can be found at any of the sandwich stands that are spread throughout the old city center. Being the island's largest city, Palermo is a particularly good city to sample Sicilian food as the options are plentiful and quite diverse. They are also reasonably priced.

Many people choose to fly into Palermo International Airport, which is located 32 kilometers to the west of the city. There are a variety of alternatives to arrive on the island though. There are ferries that make their way between Palermo and the cities of Salerno, Genoa, Civitavecchia, Livorno, Naples, Valleta (Malta), and Cagliari (Sardinia). There's also a train that runs from Rome and Naples using the train ferry that crosses the Messina Straits.

Once you arrive, there's really no need to use public transportation in Palermo as most of the sights of interest are within walking distance. If you hope to explore the city in more detail there is a bus system. You can purchase a full days (24 hours) pass for only four euros.