How much does it cost to travel to Laos?

A vacation to Laos for one week usually costs around ₭1,765,351 for one person. So, a trip to Laos for two people costs around ₭3,530,701 for one week. A trip for two weeks for two people costs ₭7,061,403 in Laos. If you're traveling as a family of three or four people, the price person often goes down because kid's tickets are cheaper and hotel rooms can be shared. If you travel slower over a longer period of time then your daily budget will also go down. Two people traveling together for one month in Laos can often have a lower daily budget per person than one person traveling alone for one week.


How expensive is Laos? How much money do I need for Laos?

How much does a trip to Laos cost? Is Laos expensive? The average Laos trip cost is broken down by category here. All of these Laos prices are calculated from the budgets of real travelers.

Looking for a hotel in Laos? Prices vary by location, date, season, and the level of luxury. See below for options.

Typical prices for Transportation in Laos are listed below. These actual costs are from real travelers and can give you an idea of the Transportation prices in Laos, but your costs will vary based on your travel style.

How much does it cost to go to Laos? Naturally, it depends on the dates. We recommend Kayak because they can find the best deals across all airlines.

The price of renting a car in Laos will depends on dates, the type of car, the location, and your age. We recommend Kayak because they can find the best deals across all car rental companies.

Tips and Handouts Budget in Laos

Laos On a Budget 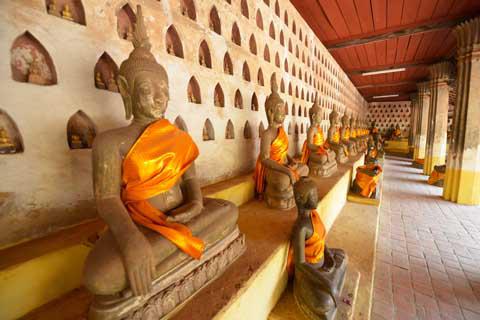 Vientiane, Laos
Laos is one of the poorest countries in Southeast Asia, and as a landlocked country with a small handful of attractions, it is often overlooked. Travelers who do come to this country come for the laid back atmosphere and beautiful landscape with striking sunsets and welcoming people. Throughout the country you'll find colonial French towns and beautiful Buddhist stupas. While it may be less popular, when you look at the subtleties, Laos has plenty to offer.

Laos is one of the most relaxed countries in Southeast Asian. Because tourism is not as popular, it has a more mellow vibe and it is the perfect place to let the days slip away in a peaceful and beautiful setting. Most visitors to this country and traveling through other parts of Southeast Asia as well. This is a great place to meet fellow backpackers, exchange tips, and rest after some grueling journeys.

Although Laos has a small population, there are still a wide range of ethnic groups. Three quarters of the population fall into the Lao, Khmou, and Hmong groups.

Vieng Xai: This town offers a unique view into Laos' past. It served as the headquarters for the Pathet Lao during the US led bombings in the 1960's. The headquarters was based in the limestone karst cave networks found throughout the towns. The caves created a "hidden city" that support about 20,000 people over the course of 9 years. It was a functioning community with schools, hospitals and markets. Today, daily tours are available of the caves.

Wat Phu: This is the site of ruins from a Kindu Khmer temple complex in the Champasak province. It dates back to the 12th century and has some similarities to Angkor Wat.

Pha That Luang: Laos is a Buddhist nation and temples are one of the most common attractions for visitors. This stupa is the national symbol and most significant monument in the country. It dates back to the 16th century and is found in the capital city of Vientiane.

Food in Laos is somewhat similar to that found in Thailand. There are several comparable dishes, although slight variations in the preparation techniques and ingredients may be obvious. The food is prepared very spicy and is more often bitter instead of sweet. It is made with lots of fresh herbs and vegetables and rice is the staple carbohydrate.

Laap: This is the national dish of Laos, and is sometimes referred to as larb. It is a salad of minced meat that is made with herbs, spices and lime juice. It is often served spicy with a large amount of chili. It is different from the Thai version of this dish because it is usually made with raw meat instead of the cooked variety.

Tam Maak Hung: This is a spicy green papaya salad. It is similar to som tam, which is found in Thailand, although it has a stronger flavor due to the fermented crab and fish sauce that is typical in Laos.

Khao Jii Pat-te: This is a common option throughout Laos and is essentially a French baguette that has been stuffed with a pate.

By backpackguru
If you've been moving swiftly through Southeast Asia, giving each location a couple of days, then Laos is a great place to slow your pace and soak up some of the atmosphere. Laos is more about the atmosphere than it is about checking sights off a list, so spend some time in the less touristy Southeast Asian country and mellow out a little bit. You'll find other travelers here for sure, but Laos is more about soaking up the local culture. Don't swiftly pass through here because you'll only regret it in the long run.