How much does it cost to travel to Ait Ben Haddou?

How much money will you need for your trip to Ait Ben Haddou? You should plan to spend around MAD562 ($55) per day on your vacation in Ait Ben Haddou, which is the average daily price based on the expenses of other visitors. Past travelers have spent, on average, MAD187 ($18) on meals for one day and MAD232 ($23) on local transportation. Also, the average hotel price in Ait Ben Haddou for a couple is MAD405 ($40). So, a trip to Ait Ben Haddou for two people for one week costs on average MAD7,870 ($773). All of these average travel prices have been collected from other travelers to help you plan your own travel budget.

Looking for a hotel in Ait Ben Haddou? Prices vary by location, date, season, and the level of luxury. See below for options.

How much does it cost to go to Ait Ben Haddou? Naturally, it depends on the dates. We recommend Kayak because they can find the best deals across all airlines.

The price of renting a car in Ait Ben Haddou will depends on dates, the type of car, the location, and your age. We recommend Kayak because they can find the best deals across all car rental companies.

Ait Ben Haddou On a Budget 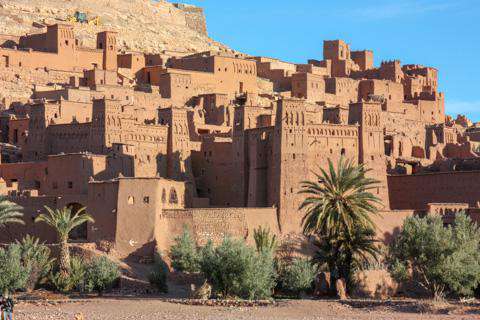 Ait Ben Haddou, Morocco
Think of a time when you've seen Jerusalem in a movie. Chances are what you're really looking at is the traditional, mud brick city of Ait Ben Haddou, Morocco. This city on the edge of the High Atlas Mountains has been an UNESCO World Heritage Site since 1987, and has also been seen in movies like Lawrence of Arabia, Orson Welles' Sodom and Gomorrah, Jesus of Nazareth, the French version of Cleopatra, Bertolucci's Sheltering Sky, Scorsese's Kundun, Gillies MacKannon's Hideous Kinky, Ridley Scott's Gladiator, Oliver Stone's Alexander the Great, and in some scenes from Game of Thrones.

Most people living in this city live in more modern houses in a nearby village, but there are four families that still live within the fortified, ancient city. The fortification is made of six Kasbahs, or place with high walls meant to defend the city from attack, and nearly fifty ksars, or individual Kasbahs.

The ksars of Ait Ben Haddou are the group of red brick earthen buildings surrounded by high walls. This traditional, pre-Saharan habitat is the biggest draw to Ait Ben Haddou. Reinforced by corner towers in the Ouarzazate province, the ksar is a shining example of southern Moroccan architecture. This gathering of buildings offers a complete view of pre-Saharan construction techniques and pise clay architecture.

This region was one of the many trading posts on the commercial route across ancient Sudan to Marrakesh. Historically, traders carried spices, slaves and gold on the Sahara Trade Route. Today, since the trade route has all but faded away so many of the Kasbahs along the route have become simple relics. Not Ait Ben Haddou, though. This site has been kept in pristine condition for the use of Hollywood and curious tourists.

The community areas of Ait Ben Haddou include a mosque, a public square, a fortification and a loft at the top of the village. There are two cemeteries â one Muslim, one Jewish â and a sanctuary.

The granary at the top of the hill is worth the trek to get up there. This impressive site is ready for your visit, but so are some eager "helpers." Many will offer a small bridge to climb up and as soon as you turn around the bridge is gone. Your new friend will likely only let you climb back down if you throw them some money.

For the best photo opportunity, you'll want to keep in mind that the sunrise is the best time of day to see golden rays stream across the Ait Ben Haddou village. Afternoon or sunset shots are nice, too, but nothing like the scene you'll capture at sunrise. Try to frame the shot to include the Kasbahs within the village, palm trees, decorative motifs, small streets full of donkeys, or storks nesting on top of the mud houses.

While the main Kasbah is right across the river from the small town, more hotels can be found up and down the main road. Also, hiking in either direction along the river (or the main road) will lead you to another town in each direction, each with its own Kasbah. The one up the river is in great condition and worth a hike if the weather is good.

There are several shops and markets within the town that sell kitschy souvenirs from all over the Sahara. Popular items include models of the ksar and wooden artifacts from the Dogon people in Mali. Be sure to haggle the price with the shopkeeper. It's very much expected in Moroccan tradition to negotiate price aggressively.

Given that this is an ancient city, you might expect that there aren't many dining options. One choice for your meal is the Hotel-Restaurant Baraka. You'll likely find a traditional dish to your liking here. Sample treats like the a la carte couscous with chicken, vegetables and trade-route spices, or the tajine with meat simmered in smen (seasoned butter) and caramelized onions.

Ait Ben Haddou is accessible from the cities of Ouarzazate and Marrakesh. Buses don't typically have a stop right at Ait Ben Haddou, but they will drop you off approximately 20 km away at a main intersection. From there, you will need to find a ride. Taxis and small buses are often found waiting at the intersection where buses drop off passengers. Negotiate for a better price if more than one vehicle is around.

If you have the money, however, then it will be better to arrange private transportation for your trip. Also, if you don't have much time, you might what to organize a private tour guide, as well.

Once you're inside the fortified city, you can only walk or climb. There are two main entrances â one is through the use of a new bridge, and the other requires crossing the river using stepping stones.