How much does it cost to travel to Zagora?

How much money will you need for your trip to Zagora? You should plan to spend around MAD400 ($37) per day on your vacation in Zagora, which is the average daily price based on the expenses of other visitors. Past travelers have spent, on average, MAD103 ($9.62) on meals for one day and MAD11 ($1.07) on local transportation. Also, the average hotel price in Zagora for a couple is MAD571 ($53). So, a trip to Zagora for two people for one week costs on average MAD5,600 ($524). All of these average travel prices have been collected from other travelers to help you plan your own travel budget.

A vacation to Zagora for one week usually costs around MAD2,800 for one person. So, a trip to Zagora for two people costs around MAD5,600 for one week. A trip for two weeks for two people costs MAD11,200 in Zagora. If you're traveling as a family of three or four people, the price person often goes down because kid's tickets are cheaper and hotel rooms can be shared. If you travel slower over a longer period of time then your daily budget will also go down. Two people traveling together for one month in Zagora can often have a lower daily budget per person than one person traveling alone for one week.


How expensive is Zagora? How much money do I need for Zagora?

How much does a trip to Zagora cost? Is Zagora expensive? The average Zagora trip cost is broken down by category here. All of these Zagora prices are calculated from the budgets of real travelers.

Looking for a hotel in Zagora? Prices vary by location, date, season, and the level of luxury. See below for options.

How much does it cost to go to Zagora? Naturally, it depends on the dates. We recommend Kayak because they can find the best deals across all airlines.

The price of renting a car in Zagora will depends on dates, the type of car, the location, and your age. We recommend Kayak because they can find the best deals across all car rental companies.

The Best Hostels, Home-stays, and Guesthouses in ZagoraAgadirOuarzazateAit Ben HaddouCasablancaRabat

Zagora On a Budget 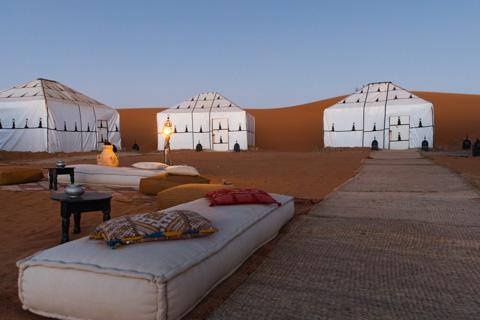 Zagora
A small town in southern Morocco, Zagora is a popular base camp for excursions on foot, by camel, or four wheel drive vehicles into the surrounding desert. One of the most famous and historic treks is the ancient caravan route to Timbuktu, marked by a famous sign at the end of town - indicating a journey of "52 days" by camel.

Those who visit Zagora are most likely using it as a stopping point before heading out on excursions to the surrounding desert attractions. One such place is the Jebel Zagora on the southeastern outskirts of the city, which many people climb for magnificent views of the city and surrounding area of the valley below. It is best to embark in the morning for cooler temperatures, and maybe even catch the sunrise.

Another popular venture is to the Tinfou dunes, just a few kilometers southeast of Zagora. The place can be accessed by all kinds of vehicles and is a great way to experience the desert landscape within the safety of nearby civilization.

The region's religious center, Tamegroute, is also not far. It is home to the desert area's first library with a number of ancient manuscripts, and is also a place renowned for the expertise of its artisan potters.

A visit to Amazraou, a village just south of Zagora, is also worth a visit. It is located at the foot of an ancient Jewish Kasbah, or fortress. Dating from the 12th century, it is situated amidst a palm grove with plenty of alleyways, adobe houses, and market squares to explore.

Zagora is a small town located in the Draa River valley of Souss-Massa Draa in the south-east of Morocco. While the town itself is dry and flat, it is flanked by mountains with a vast grove of palms and the Draa River to the east. There are a number of small cafes and restaurants on the main drag of town as well as a number of juice and dairy shops. Most hotels are located on the south end of town or in the neighboring smaller town of Amazraou. Many street corners are vibrantly painted with scenes of palm trees and traditional Kasbahs, bringing color and life to residential areas. There is also a traditional souk, or Moroccan marketplace, located just outside of the city, held on Sundays and Wednesdays. Vendors sell fruits, vegetables, meat, and live animals as well as traditional clothing, local handiwork, toiletries, kitchenware, and furniture. There is also an adjoining flea market with a full range of items usually brought over from Europe.

As mentioned earlier, Zagora is a base camp for ventures in the surrounding landscape. Any one of the excursions mentioned above can occupy one's time in the area. Hiking or backpacking, four wheel drive trips, and camel caravans are the most popular means of travel when it comes to these adventures.

Food in Zagora is that which is typical of Moroccan cuisine, influenced by a mix of Arabic, Andalusian, Berber, and Mediterranean cultures. One of the best known Moroccan dishes is couscous, usually topped with a stew of meat (beef or chicken) and vegetables. Dishes like this one are typically served in a tangine, or earthenware pot, in which it is cooked. Lamb is also very popular in Moroccan cooking, as is seafood. Other well-known dishes include a sweet and savory pie called Pastilla (made with meat, spices, almonds, and cinnamon), a kind of stew called Tanjia, and a traditional soup called Harira (made with tomatoes, lentils, chickpeas, onions, rice, and meat). Most meals are accompanied by bread - ranging from white flour bread and baguettes to flat breads and unleavened pan-fried breads. For dessert it is typical to have seasonal fruit, while a popular beverage is green tea with mint. Street food is also very common. There are plenty of cafes and restaurants along the main drag of Zagora, as well as some nice places to eat in the hotels just south of town in Amazraou.

The nearest international airports are Marrakech Menara Airport and Ouarzazate Airport. From Marrakech, travelers can take a direct bus to Zagora for a journey of about 8 hours. From Ouarzazate there are buses and also collective taxis, taking about 3 hours. While the distance is greater from Zagora, the airport at Marrakech offers a wider range of services to and from cities including London, Dublin, Oslo, Copenhagen, Stockholm, Paris, and Madrid. For those flying from the United States and Canada, the closest airport is Mohammed V International Airport in Casablanca, which has connector flights to Marrakech.

By backpackguru in Entertainment
The deserts near Zagora make it a popular place to head into the Sahara, do a camel trek, and watch the sunset over the sand dunes. About five kilometers out of town you find the beautiful sand dunes in the desert. The dunes, referred to as the "dunes of Tinfou" are a popular place to visit, and a great place to watch the sunset. As the sun dips below the horizon you the colors turn an incredibly striking orange and you know you're somewhere special. It's not an undiscovered place, and when you arrive you'll be met by camels and their owners, eager to take you into the desert of a ride. You also have the option to spend the night in the desert and see the sunrise the next morning. Including in the arrangement is a bedouin tent and meals, and a little traditional entertainment.