How much does it cost to travel to Rabat?

How much money will you need for your trip to Rabat? You should plan to spend around MAD352 ($33) per day on your vacation in Rabat, which is the average daily price based on the expenses of other visitors. Past travelers have spent, on average, MAD99 ($9.27) on meals for one day and MAD17 ($1.58) on local transportation. Also, the average hotel price in Rabat for a couple is MAD437 ($41). So, a trip to Rabat for two people for one week costs on average MAD4,930 ($461). All of these average travel prices have been collected from other travelers to help you plan your own travel budget.

A vacation to Rabat for one week usually costs around MAD2,465 for one person. So, a trip to Rabat for two people costs around MAD4,930 for one week. A trip for two weeks for two people costs MAD9,860 in Rabat. If you're traveling as a family of three or four people, the price person often goes down because kid's tickets are cheaper and hotel rooms can be shared. If you travel slower over a longer period of time then your daily budget will also go down. Two people traveling together for one month in Rabat can often have a lower daily budget per person than one person traveling alone for one week.


How expensive is Rabat? How much money do I need for Rabat?

How much does a trip to Rabat cost? Is Rabat expensive? The average Rabat trip cost is broken down by category here. All of these Rabat prices are calculated from the budgets of real travelers.

Looking for a hotel in Rabat? Prices vary by location, date, season, and the level of luxury. See below for options.

How much does it cost to go to Rabat? Naturally, it depends on the dates. We recommend Kayak because they can find the best deals across all airlines.

The price of renting a car in Rabat will depends on dates, the type of car, the location, and your age. We recommend Kayak because they can find the best deals across all car rental companies.

What did other people spend on Transportation in Rabat?

Typical prices for Transportation in Rabat are listed below. These actual costs are from real travelers and can give you an idea of the prices in Rabat, but your costs will vary based on your travel style.

Tips and Handouts Budget in Rabat

What did other people spend on Tips and Handouts in Rabat?

Typical prices for Tips and Handouts in Rabat are listed below. These actual costs are from real travelers and can give you an idea of the prices in Rabat, but your costs will vary based on your travel style.

What did other people spend on Water in Rabat?

Typical prices for Water in Rabat are listed below. These actual costs are from real travelers and can give you an idea of the prices in Rabat, but your costs will vary based on your travel style.

Rabat On a Budget 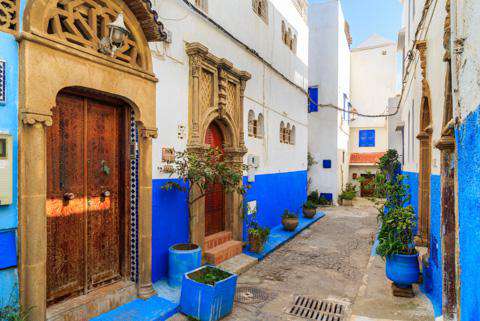 Rabat
While not high on the tourist destination list, Rabat is a quiet gem of a city with stunning colonial architecture and palm-lined streets. This political capital is a laid-back, pleasant alternative to the more cosmopolitan Casablanca.

Located on the coast of the Atlantic Ocean at the mouth of the river Bou Regreg, Rabat plus the city of Temera are home to a combined metropolitan population of 2.6 million.

Like many cities in Morocco, Rabat is home to some spectacular ancient architecture. The Kasbah of the Oudaias, for example, is the stunning medieval Almohadan citadel that gives visitors breathtaking ocean views from the acropolis. When you're done, have a stroll through the calming Andalusian gardens at the base of the Kasbah.

For a day of charming sightseeing, visit old medina and its various street markets. The side streets leading to Kasbah are full of history and traditional shops full of unique Moroccan gifts.

The abandoned and overgrown old Merenid necropolis of Chellah is one of Rabat's most interesting attractions. First settled by Phoenicians, the town grew into the city of Sala Colonia under Roman control in 40 AD. The city was then abandoned in 1154, but in the 14th century the Merenid Sultan Abou al-Hassan Ali built a necropolis on top of the Roman city. Today, the city is overgrown by fruit trees and wild flowers. It is a beautiful place to wander and relax. From the moment you enter the main gate, a path leads you through fig, olive and orange trees to a platform overlooking the ruins of the Roman city. You won't be disappointed by an afternoon at the Chellah.

Shopping is one activity many tourists can't get enough of. While the markets in Rabat aren't as impressive as the ones in Fez or Marrakesh, there are still plenty of good deals to find. Shop the medina for the normal array of babouche shoes, baggy pants, ornate jewelry and more.

For the bold, adventurous traveler, head to the Oudayes Surf Club to try our some surfing on the beach. The Oudayes beach by the Kasbah is home to a continuous set of small waves perfect for beginner surfers and children.

If you happen to plan your visit for the month of May, check out the listings for the Mawazine festival of world music. Featuring Arab, African and other international music icons, the festival is a bit controversial with some of the country's Muslim politicians for "encouraging immoral behavior." Previous performers include Stevie Wonder, Carlos Santana, Elton John and B.B. King,

Rabat has along tradition of French and Spanish culture. In the medina area, there are often inexpensive food stalls serving fish and salad sandwiches. Particularly found around the Marche Centrale, the stalls also serve fresh salads, hot bowls of lubia (beans) or lentils, fresh rotisserie chicken and home-made tagines. If you're looking to quench that sweet tooth, some of these stalls also sell pancakes or pain au chocolat.

Getting around Rabat couldn't be easier, with several options for transportation. The tram, for example, is cheap and one runs every ten minutes â every twenty minutes on Sundays. There are two lines between Rabat and Sale. Maps are available in every station.

Another option is to hail one of the small blue cars that make up the petit taxi system. This option is also fairly inexpensive, but be sure you check that the meter is running to avoid being overcharged. This isn't as big a problem in Rabat as it is in other cities. If you see the white Mercedes Grand Taxis, avoid them. They tend to be more expensive and less safe than the petit taxis.

There are also official bus routes around Rabat. The buses vary in their quality, but provide a very cost-effective way to get around time. The lines have many stops that may interest a tourist, but if the bus is crowded watch out for pickpockets.

Walking around central Rabat is pretty easy, if you're not in a hurry to get anywhere. Driving yourself, however, is not recommended. Drivers will avoid you given the high insurance rates, but Morocco still has the second highest rate of car accidents in the world. Drivers generally don't abide by the laws so it might be best to walk or have someone else drive you.

By backpackguru in Entertainment
Most people head to Fez or Casablanca, but Rabat actually has a very interesting and authentic medina. It's a great place to explore at night when the shops are all open and the locals are all out. Street venders set up stalls to sell children's toys and line the walkway. It's easy to get lost but that's part of the fun. Head down some of the alleyways and find yourself a meal with some Moroccan bread and soup. It's a great way to escape the tourist crowds and see a little of the "real' Moroccan that still has some of that old world charm.