How much does it cost to travel to Delft?

How much money will you need for your trip to Delft? You should plan to spend around €96 ($101) per day on your vacation in Delft, which is the average daily price based on the expenses of other visitors. Past travelers have spent, on average, €30 ($31) on meals for one day and €5.71 ($6.04) on local transportation. Also, the average hotel price in Delft for a couple is €122 ($129). So, a trip to Delft for two people for one week costs on average €1,338 ($1,413). All of these average travel prices have been collected from other travelers to help you plan your own travel budget.

A vacation to Delft for one week usually costs around €669 for one person. So, a trip to Delft for two people costs around €1,338 for one week. A trip for two weeks for two people costs €2,676 in Delft. If you're traveling as a family of three or four people, the price person often goes down because kid's tickets are cheaper and hotel rooms can be shared. If you travel slower over a longer period of time then your daily budget will also go down. Two people traveling together for one month in Delft can often have a lower daily budget per person than one person traveling alone for one week.


How expensive is Delft? How much money do I need for Delft?

How much does a trip to Delft cost? Is Delft expensive? The average Delft trip cost is broken down by category here. All of these Delft prices are calculated from the budgets of real travelers.

How much do vacation rentals cost in Delft? Prices vary by location, date, size of the place, and the level of luxury. See below for options.

How much does it cost to go to Delft? Naturally, it depends on the dates. We recommend Kayak because they can find the best deals across all airlines.

The price of renting a car in Delft will depends on dates, the type of car, the location, and your age. We recommend Kayak because they can find the best deals across all car rental companies.

Delft On a Budget 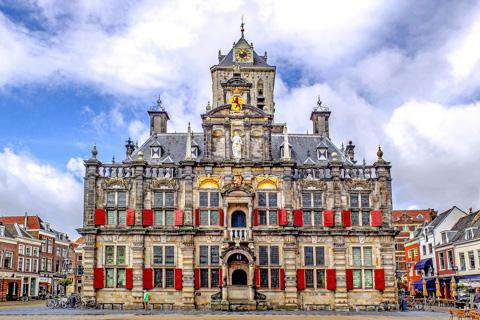 Delft, Netherlands
Delft is a wonderful, traditional town in the Netherlands that has historical architecture, numerous canals, bicyclists, and the popular, locally produced blue and white ceramics. The city itself is moderately sized and can easily be explored as a day trip. Alternatively, it's large enough to serve as a base if you wish to explore other parts of the region. Most people head to Amsterdam and then leave the Netherlands, but Delft offers an interesting alternative for those hoping to experience the Dutch culture on a more personal scale.

There is no shortage of historical sights around Delft and some of the more popular sights include the New Church, De Prinsenhof, the Old Church, Vermeer Centrum Delft, the Synagogue, the Royal Delft Factory, De Candelaer, the windmill, and the botanical gardens.

The New Church was built in 1496 and has an impressive view of the city. It's also the second highest church tower after the Dom church of Utrecht. The Old Church was built in 1246 and it has a very impressive and detailed interior. At the Vermeer Centrum you'll learn about the 17th century painter, Johannes Vermeer. The Synagogue was built in 1862 and now has a permanent exhibit to remember the Jewish victims of World War II. The windmill is interesting to see and can be visited if the blue flag is flying.

You'll likely to spend most of your time in the Centre of town. This area is most comparable to Amsterdam with its historical architecture and interesting canals. There are several suburbs outside of the Centre. Tanthof is a popular residential area for families, as is Hof van Delft. Vrijenban is to the north of the Centre and Buitenhof has a young population. Other nearby towns include Pijnacker, Delfgauw and Nootdorp.

Many people come to Delft to buy the world famous ceramic pottery. You can find antique shops around town that sell the most traditional versions. Some other popular shopping areas around Delft include Vrouwjuttenland, Choorstraat, Hippolytusbuurt, and Bastiaansplein.

Other interesting activities include various walking tours around town, taking a canal boat tour, visiting the Delft Library, or walking through many of the area's parks.

There are many festivals in town including Mooi Weer Spelen with its street theater, Taptoe, which is a parade of marching bands, the music festival Westerpop, and Varend corso, when boats decorated with flowers are on display.

Restaurants are plentiful around town and the more affordable options are usually along the back streets further removed from the more popular town center. There's also a market in town on Thursdays and Saturdays when you can pick up some fresh produce, cheeses, or breads to enjoy. Two popular favorites are the freshly made syrup covered waffles and the battered and deep fried fish, both of which are quite delicious.

The two most obvious ways to explore Delft are on foot or by bicycle. The town center is small and compact and can easily be walked across in about ten minutes. Many of the streets are pedestrian only, but taxis are allowed access to them. Do keep your wits about you at night when taxis are known to speed through the area. Also be sure and make room for locals biking through doing their daily chores.

The Netherlands is famous around the world for its large number of bikers and Delft is no exception. The flat terrain makes it ideal for cycling and many people choose bicycles as the typical means of travel. You can rent a bike at the Delft train station. They will require a deposit as well as some form of identification. If you're traveling in a group it is better to call ahead and reserve bicycles to ensure that they have enough available.

Driving in town is generally not recommended as there are many pedestrian only areas. There are two parking areas on the edge of the city center, but they are expensive. It's possible to park for free in the university area but you will have about a 15 minute walk to the center of town. Spaces are usually available on the weekends.

By backpackguru in Souvenirs
Part of visiting Delft is to shop and explore the art of Delft Blue. The porcelain is world renowned and it's easy to see why. Most visitors head to at least one museum such as the Stedelijk Museum at Prinsenhof where you can learn all about the Delft Blue and see some very nice pieces. After you've hit up the musuem, head into the shops that are all around town. These adorable little Delft Blue shops are the perfect place to learn a little more and perhaps pick yourself up a nice souvenir. The town itself is quaint and quiet, making for a wonderful afternoon of shopping and exploring in a little bit of peace and quiet.