How much does it cost to travel to Leiden?

How much money will you need for your trip to Leiden? You should plan to spend around €107 ($122) per day on your vacation in Leiden, which is the average daily price based on the expenses of other visitors. Past travelers have spent, on average, €31 ($35) on meals for one day and €21 ($24) on local transportation. Also, the average hotel price in Leiden for a couple is €124 ($142). So, a trip to Leiden for two people for one week costs on average €1,492 ($1,706). All of these average travel prices have been collected from other travelers to help you plan your own travel budget.

A vacation to Leiden for one week usually costs around €746 for one person. So, a trip to Leiden for two people costs around €1,492 for one week. A trip for two weeks for two people costs €2,985 in Leiden. If you're traveling as a family of three or four people, the price person often goes down because kid's tickets are cheaper and hotel rooms can be shared. If you travel slower over a longer period of time then your daily budget will also go down. Two people traveling together for one month in Leiden can often have a lower daily budget per person than one person traveling alone for one week.


How expensive is Leiden?

How much does a trip to Leiden cost? Is Leiden expensive? The average Leiden trip cost is broken down by category here. All of these Leiden prices are calculated from the budgets of real travelers.

While meal prices in Leiden can vary, the average cost of food in Leiden is €31 per day. Based on the spending habits of previous travelers, when dining out an average meal in Leiden should cost around €12 per person. Breakfast prices are usually a little cheaper than lunch or dinner. The price of food in sit-down restaurants in Leiden is often higher than fast food prices or street food prices.

The cost of a taxi ride in Leiden is significantly more than public transportation. On average, past travelers have spent €21 per person, per day, on local transportation in Leiden.

How much does it cost to go to Leiden? Naturally, it depends on the dates. We recommend SkyScanner because they can find the best deals across all of the airlines.

How much do tours to Leiden cost? Multi-day tours can often be an effecient way to see the highlights of a country or region.

Find a hostel, guesthouse, or B&B in Leiden

Leiden On a Budget

Gravensteen in Leiden is a historical monument that was once a prison, and today is a building associated with the university. Centuries ago, when this building served as a prison, there was a gallery that looked out at the plaza where judges could view public executions.

The most well-known museum in Leiden is the Rijksmuseum van Oudheden. It is the national archeological museum of the Netherlands and is associated with the archaeology department of the university. The focus of the museum is around ancient Egypt, Greece, and Rome. The museum is located near Pieterskerkhof, which is in the same plaza as Gravensteen.

Molenmuseum de Valk takes you through the history of the famous Dutch windmills. You are able to actually go inside the windmill and learn how windmills work, the purposes they serve, and how they played a role in Leiden's history.

There are a few surrounding neighborhoods in the Leiden area that are a bike or tram ride away. Katwijk and Noordwijk are two beach towns that are nearby and have restaurants, shops, and beautiful sand dunes to explore. Wassenaar is also a surrounding neighborhood to Leiden with a large waterpark called Duinrell. If you happen to be in the Netherlands during tulip season (April/May), then visit the Lisse region and you can bike around to explore the famous Dutch tulip fields.

Leiden has a buzzing music scene, with many international and local artists playing in music clubs and at festivals. Ontzettend is a battle of the bands festival that happens every September. Another great festival takes place around October 3rd every year and is the commemoration of the Siege of Leiden when the Spanish tried to capture the city during the Eighty Years' War. At this festival, you will find amusement rides, food vendors, and lots of live music. Seeing Leiden on foot is a great way to see the city, but seeing it from the water is even better. There are many canal tour companies all over the city that offer private or group tours around the historical city. You can also rent a rowing boat for your self if you want to explore at your own pace.

Leiden has a wide variety of food to offer for travelers. In Leiden, you can find typical Dutch food, burger joints, high-end French cuisine, or just order Chinese takeout. For a Dutch style meal, t Suppiershuysinghe is a great place to go. It is more of a brunch type place that has great coffee, and small sandwich type meals. It's located in a square in the city center, which is an excellent place for people watching while enjoying a day out in Leiden. David's Burger is a great place that offers an array of organic burgers. For those wanting the high-end French cuisine I mentioned above, go to Dartel. There are Asian style take away places all over town. Woo Ping is Chinese, Toko BungaMas is Indonesian, and Sushi Bento is Japanese. I suggest trying the Indonesian food!

To get to Leiden from Schiphol Airport, or any other city that you may be visiting in the Netherlands, just take an Intercity or Sprinter train to Leiden Centraal. Exiting central station brings you right out into the city center. Once in the city, basically your options are: bike, car, taxi, bus, tram, or foot. Biking is the best way to get around, as you can really see a lot of the city and the surrounding neighborhoods as well. However, for those who aren't inclined to bike or the weather doesn't permit, there is a tram system in Leiden too. Tickets can be purchased on board the tram. Walking is also a great option because it allows you to be able to easily go in and out of shops and cafes as you venture around the city. Renting a car and taking taxis can be an option, but should be used as more of a last resort. The public transportation in the Netherlands is very efficient and easy to use; so take advantage of that before spending money on a car or taxi. 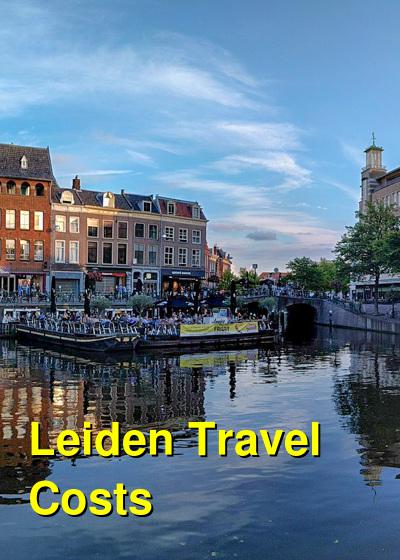