Things to do, Where to eat, What to see

Pacific / New Zealand / South Island / Lake Tekapo /
The small highland town of Tekapo can be found on the edge of Lake Tekapo in the Mackenzie Basin, the center of New Zealand's South Island. With stunning views of Lake Tekapo's turquoise water and the mountains of the Southern Alps, it's a picturesque area visited by thousands of travellers a year.

Popular with travellers and locals alike, Lake Tekapo is located on the popular travel route between Christchurch and Queenstown, and is often used as a base for exploring areas such as Aoraki Mount Cook National Park.

Things to do in and around Lake Tekapo, New Zealand 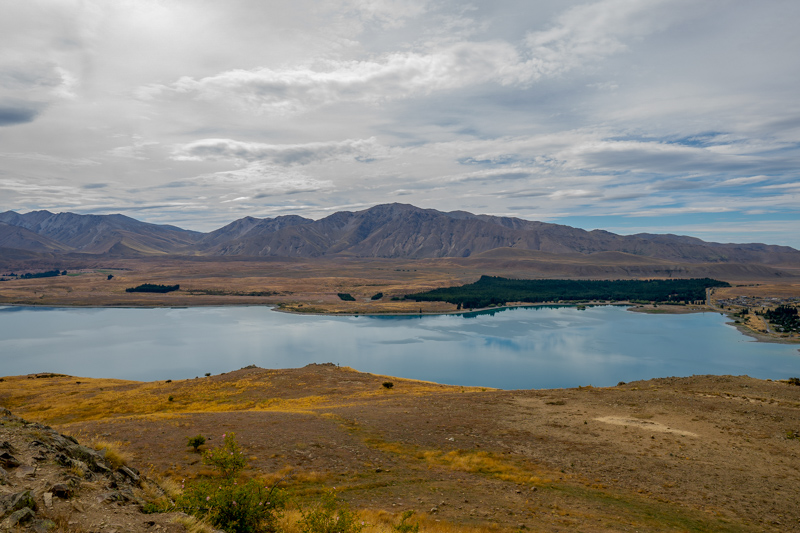 Known for its spectacular views of both Lake Tekapo and the Alps the walks around Lake Tekapo don't disappoint. Whether you're after a short stroll or are prepared for a more intense climb, you'll find it in Lake Tekapo.

The most popular walk is the Mount John Summit Circuit Track. This 3 hour return circuit will take you through local brush forest, up the side of Mount John to the summit for spectacular 360 degree panoramic views of the Mackenzie Basin. The Mount John Summit Track starts near Tekapo Springs car park.

At the top of Mount John is the Mount John Observatory. By day the Observatory offers breathtaking views and by night, it is one of the best places in New Zealand for stargazing.

The Astro Cafe is located next to the Mount John Observatory. Enjoy a coffee or nice meal inside the glass walled cafe, while looking out across Lake Tekapo.

Lake Tekapo and the Mackenzie Basin are part of the UNESCO World Heritage Dark Sky Reserve, the only Dark Sky Reserve in the Southern Hemisphere. Artificial light is strictly controlled over a 4300 square kilometre area. The lack of artificial light combined with the clear atmosphere and clear skies of Tekapo make it the perfect location to see the constellations such as the milky way and southern cross.

If you're in Lake Tekapo between April and September, you have the best chance of seeing the Southern Lights, the Southern Hemispheres equivalent of the European Northern Lights.

Book a stargazing tour around the Observatory to get the best views.

Church of the Good Shephard 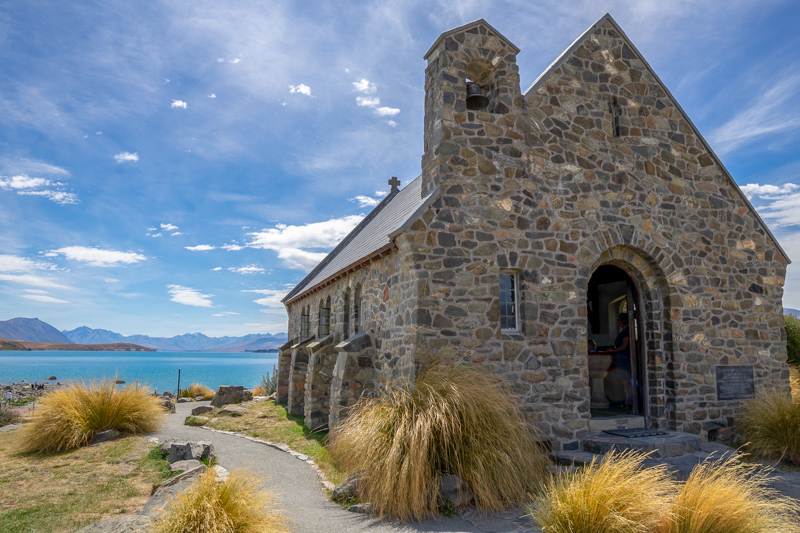 The charming Church of the Good Shephard sits on the shores of Lake Tekapo. Built in 1935, it's heritage stone facade looks incredible against the backdrop of the lake, Southern Alps and the lupins that grow in the warmer months. If you've seen those photo's online, you'll know why it is a popular attraction in Lake Tekapo.

The Church of the Good Shephard is still used for ceremonies and services throughout the year so be mindful when you visit.

The beautiful, colourful lupins of Tekapo are a draw card for many nature lovers. Pinks, purples, blues and yellows sprout up from the end of spring through summer throughout the Mackenzie region creating a wash of colour against the usually golden brush landscape.

The best time to see Lupins around the Tekapo region is around late November. While you'll find them throughout the rest of the Mackenzie region well into the summer, they'll have stopped flowering in Tekapo well before then.

Opposite Lake Tekapo, beside the start of the Mount John Summit Circuit, is Tekapo Springs. Soak in hot pools as you look out over the beautiful lake and mountain ranges. In winter, Tekapo springs becomes an ice rink.

Located in the highlands of the Mackenzie basin, and near the Southern Alps, there is plenty of opportunity to enjoy alpine activities such as trekking, climbing and skiing near Lake Tekapo.

On the north side of the Lake, about 25km from Lake Tekapo, the Roundhill Ski Area is a great ski field for beginners and intermediate skiers alike.

Go back country through the Mackenzie basin

One of the best ways to experience New Zealand is to get off the highways and explore the back country, and the Mackenzie Basin region is no exception.

The Mackenzie basin is sparsely populated with only four small towns in the region. Besides Lake Tekapo, there is Omarama, Twizel and Mount Cook Village. Rolling mountains including snow capped slopes and glaciers, and open farm land lay between the picturesque towns. There are spectacular sights to be seen at every turn.

If you don't have your own car or campervan, you can hire one for a few days to explore the region (check prices here), or join a 4WD backcountry tour.

Close to the Aoraki Mount Cook National Park, Tekapo makes a great base for trips to Mount Cook. With some beautiful hikes such as the Hooker Valley track and the chance to see glaciers, there are plenty of adventure activities in the National Park.

Where to eat in Lake Tekapo

There is a plethora of restaurants in Lake Tekapo offering a wide variety of cuisines. Some restaurants worth a visit include:

Our Dog Friday is a great little hamburger place that is also open for breakfast.

Kohan Restaurant offers a variety of Japanese cuisines with a view of Lake Tekapo.

Where to stay in Lake Tekapo

For those driving around New Zealand, the Lake Opuha Reserve Picnic Area is one of the most beautiful freedom camping places in the South Island. While it is a 45-minute drive away in Fairlie, it is well worth it to camp opposite such an incredible view.

The Lakefront Lodge Backpackers is only a kilometre from Lake Tekapo town centre and close to the Church of the Good Shephard and the start of the Mount John Summit Hike.

The Lake Tekapo Village Motel is right in the middle of town near the lake, and has rooms at a reasonable price.

How to get to Lake Tekapo, New Zealand

Getting to Lake Tekapo is easy with buses operating from the closest cities such as Queenstown, Christchurch, and Dunedin, and from the smaller towns of Oamaru, and Wanaka.

The closest international airport is Christchurch, around 3 hours from Lake Tekapo. If you want to hire or rent a car, check out the prices here.

In a car or campervan Lake Tekapo can easily be accessed via Highway 8, the main route between Queenstown and Christchurch.

Lake Tekapo is a great area to visit at all times of year. In summer, the average temperature sits between 19 and 22 degrees. Lupins may still be visible at the start of the season; hikes are easy and panoramic views are clear in the nice weather.

In winter there is the chance to see the Southern Lights and take advantage of the many alpine activities available in the surrounding areas. Winters are cold in Lake Tekapo, with temperatures averaging below zero.

The shoulder seasons on spring and autumn are less expensive, with more moderate temperatures. In spring you may see lupins, most likely at the end of November. In autumn, you'll be able to see snow and ice in mount Aoraki.

Christine is the author at Travellers With Time. She and her partner Ben have been on the road for almost 18 months. They spent five glorious weeks travelling New Zealand in a camper van, freedom camping, and enjoying New Zealand's spectacular environment. They can also be found on facebook.

3-Week New Zealand Itinerary: How to spend 21 daysWhat is the Best Time for Hiking in New Zealand? 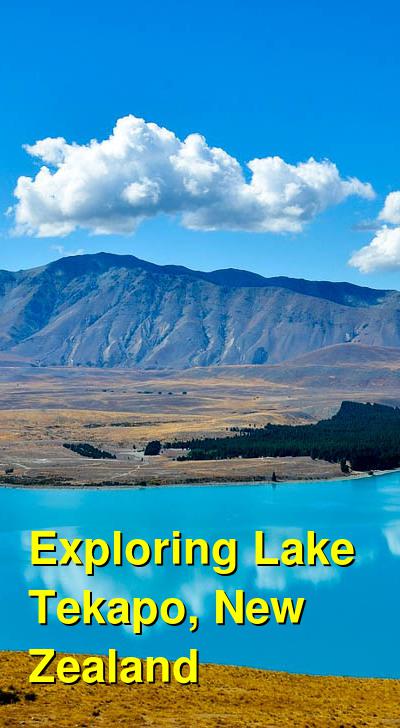