How much does it cost to travel to Gdansk?

How much money will you need for your trip to Gdansk? You should plan to spend around zł271 ($68) per day on your vacation in Gdansk, which is the average daily price based on the expenses of other visitors. Past travelers have spent, on average, zł80 ($20) on meals for one day and zł30 ($7.47) on local transportation. Also, the average hotel price in Gdansk for a couple is zł329 ($83). So, a trip to Gdansk for two people for one week costs on average zł3,788 ($951). All of these average travel prices have been collected from other travelers to help you plan your own travel budget.

A vacation to Gdansk for one week usually costs around zł1,894 for one person. So, a trip to Gdansk for two people costs around zł3,788 for one week. A trip for two weeks for two people costs zł7,577 in Gdansk. If you're traveling as a family of three or four people, the price person often goes down because kid's tickets are cheaper and hotel rooms can be shared. If you travel slower over a longer period of time then your daily budget will also go down. Two people traveling together for one month in Gdansk can often have a lower daily budget per person than one person traveling alone for one week.


How expensive is Gdansk?

How much does a trip to Gdansk cost? Is Gdansk expensive? The average Gdansk trip cost is broken down by category here. All of these Gdansk prices are calculated from the budgets of real travelers.

While meal prices in Gdansk can vary, the average cost of food in Gdansk is zł80 per day. Based on the spending habits of previous travelers, when dining out an average meal in Gdansk should cost around zł32 per person. Breakfast prices are usually a little cheaper than lunch or dinner. The price of food in sit-down restaurants in Gdansk is often higher than fast food prices or street food prices.

The cost of a taxi ride in Gdansk is significantly more than public transportation. On average, past travelers have spent zł30 per person, per day, on local transportation in Gdansk.

How much does it cost to go to Gdansk? Naturally, it depends on the dates. We recommend SkyScanner because they can find the best deals across all of the airlines.

How much do tours to Gdansk cost? Multi-day tours can often be an effecient way to see the highlights of a country or region.

Find a hostel, guesthouse, or B&B in Gdansk

Gdansk On a Budget

Gdansk, Poland
Gdansk is the capital and largest city of the Pomeranian Voivodeship in northern Poland. The port dates back a thousand years and was an influential city in the Hanseatic League during the Middle Ages. The city was essentially destroyed during World War II but has rebuilt into one of Europe's most beautiful port cities. The city now has a population of around 460,000 and is a popular tourist destination for visitors from around the globe. It is known for its impressive city center, its great museums, and its beaches that line the coast of the Gulf of Gdansk. In particular, it is a popular summer destination.

Gdansk's climate is temperate and it has cold and cloudy winters. Summers are mild with rain and thunderstorms common. It often feels damp throughout the city. There are four distinct seasons. Spring begins in March and starts out cold and windy but eventually becomes warmer and sunny. Summer starts in June and is usually warm with occasional heat waves. Sun is mixed with sudden rainstorms. Fall starts in September and begins with warm and sunny weather but quickly becomes cold, damp and foggy. Winter is between December and March, and snow is not uncommon. Temperatures can drop down to -15 degrees Celsius.

The city's main attractions are predominantly in the Srodmiescie district with a few scattered throughout the city center.

In addition to exploring the city, many visitors also enjoy taking a dip in the sea. You can take the tram to the last stop at Stogi Plaza. The water is usually very cold but the beach is large and clean. There are lifeguards and food stands as well. Other interesting options include taking canoe tours through the canals or taking a sailing trip.

There are a variety of restaurants around town that are a range of prices. If you're on a tight budget then you can try a milk bar, which is a low cost restaurant that dates back to the communist period. Prices are quite low and the quality of the food is usually decent. One popular milk bar is Kmar Bar Mleczny on Pomorska, about a ten minute walk from the Oliwa SKM train stop. It's a great place to experience the local atmosphere. Another option is Bar Neptun on Dluga at the middle of the Long Lane. It's also a milk bar that offers very filling Polish meals at very reasonable prices.

Another option is to try a Pierogarnia. These are traditional Polish dumpling kitchens. A favorite is Pierogarnia U Dzika. It's a large restaurant that serves pierogarnia dzika, or their specialty wild boar dumplings. Other options are available as well.

Gdansk's city center is generally compact and easily walkable. Most of the city's main attractons can be reached on foot, but if you're hoping to go farther away from the city center, then there is a good public transit system as well. There are trams and buses that run throughout the city. You can buy tickets at the machines that are next to each of the stops. Tickets can be purchased for either one ride or by travel time. You can get your ticket stamped at the yellow machines on the bus or tram right after you board. There is also a 24 hr pass that is good on all trams and buses.

In addition to the buses and trams, there are also two water tram lines. F5 runs from Zabi Kruk to Westerplatte and F6 goes from Targ Rybny to the National Sailing Center. These water trams only run between the beginning of May and the end of September. They require separate tickets.

Many visitors to this amazing Polish city recommend that you spend at least a few days exploring. In fact, if you have more time, check out this amazing guide to spending 3 days in Gdansk. It covers everything from what to see and do to transportation. And if you're planning to see more of this amazing country, read this guide to the best places to visit in Poland.


Train and Bus Prices
The best prices for buses and trains in Poland can be found on Omio (formerly GoEuro). They let you search across all train, bus, and plane routes throughout the region. 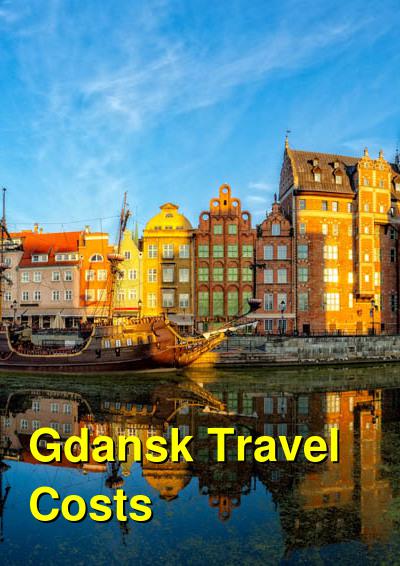