How much does it cost to travel to Poznan?

How much money will you need for your trip to Poznan? You should plan to spend around zł114 ($25) per day on your vacation in Poznan, which is the average daily price based on the expenses of other visitors. Past travelers have spent, on average, zł33 ($7.35) on meals for one day and zł14 ($3.04) on local transportation. Also, the average hotel price in Poznan for a couple is zł106 ($23). So, a trip to Poznan for two people for one week costs on average zł1,590 ($353). All of these average travel prices have been collected from other travelers to help you plan your own travel budget.

A vacation to Poznan for one week usually costs around zł795 for one person. So, a trip to Poznan for two people costs around zł1,590 for one week. A trip for two weeks for two people costs zł3,181 in Poznan. If you're traveling as a family of three or four people, the price person often goes down because kid's tickets are cheaper and hotel rooms can be shared. If you travel slower over a longer period of time then your daily budget will also go down. Two people traveling together for one month in Poznan can often have a lower daily budget per person than one person traveling alone for one week.


How expensive is Poznan? How much money do I need for Poznan?

How much does a trip to Poznan cost? Is Poznan expensive? The average Poznan trip cost is broken down by category here. All of these Poznan prices are calculated from the budgets of real travelers.

Looking for a hotel in Poznan? Prices vary by location, date, season, and the level of luxury. See below for options.

How much does it cost to go to Poznan? Naturally, it depends on the dates. We recommend Kayak because they can find the best deals across all airlines.

The price of renting a car in Poznan will depends on dates, the type of car, the location, and your age. We recommend Kayak because they can find the best deals across all car rental companies.

Poznan On a Budget 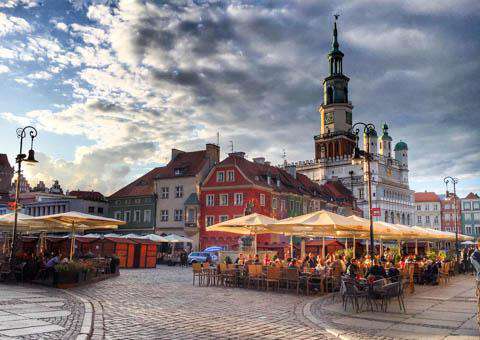 Poznan, Poland
Poznan is a city on the Warta River in western Poland. It's known for universities as well as its old town, with Renaissance-style buildings in Old Market Square. Poznan Town Hall houses the Historical Museum of Poznan, with exhibits on the city. The town hall's clock features mechanical goats that butt heads at noon. The Gothic and baroque Saints Peter and Paul Cathedral is built on an island named Ostrow Tumski. The city's Old Town district is buzzing at any time of the day, and positively jumping by night, full of people heading to its many restaurants, pubs, and clubs. The combination of international business travelers attending its numerous trade fairs and the city's huge student population has created a distinctive vibe quite independent of tourism. Poznan is the capital of the Wielkopolska region of Poland, and has always played an important role in Poland's history and today remains one of the oldest, yet most vibrant and beautiful Polish cities.

Citadel Park is Poznan's largest park, situated in the city center. It only became an urban park after 1945; previously it belonged to a village near Poznan. This area contains the remains of a former Prussian fortress from the partition times; the fortress now houses the Museum of Armaments as well as the Army Museum âPoznan'. Moreover, a large number of historically significant sculptures are located in the Citadel Park. The park has a large open space where concerts are often held.

Poznan's 17th-century church of St. Stanislaus the Bishop and the Martyr is one of the prize examples of Baroque architecture in Poland. It also served as a temporary cathedral when the real one was undergoing renovation immediately after World War II. Highlights include an altarpiece in the presbytery by Pompeo Ferrari and the painting âSt. Stanislaus Resurrecting Piotrowin' by Szymon Czechowicz. There is also a crypt under the church where monks and parishioners would be buried for over one century.

The Cathedral Island (Ostrow Tumski) is famous for being one of the first settlements of the Piast dynasty. The basilica's underground contains the original Piast church from the 10th century, where you will find a real historical gem â the tombs of the first rulers of the country: Mieszko I and his son, who was Poland's first king, Boleslaw the Brave. Nearby, you will find the Heritage Center of Cathedral Island âBrama Poznania'. The island is connected to the main city area with two bridges named after Poland's first rulers buried on the island. It is worth visiting the island for its wonderful landscape as well.

The beautiful Imperial Castle was created for a German emperor at the beginning of last century, which makes it the youngest monarchical residence on the whole continent. It is here that the talented Polish academics were working on the solving of the German Enigma. During World War II, Adolf Hitler resided in the castle. Its rich and outstanding history make it one of the most curious places in the city.

Poznan Old Town is the centermost neighborhood of the city of Poznan. It is the only neighborhood of much interest to tourists because it is, without a doubt, the city's most beautiful and historically interesting area, and within it â the Old Market Square with the Town Hall in its center. This Renaissance building is famous for its clock with mechanical Billy goats, which plays the city's bugle call at noon. When it is played, the goats appear and âdance' to the music. The town hall dates back to the 14th century and nowadays functions as the Historical Museum of Poznan. At the western end of the Old Town is the Przemysl Hill on which the King's castle once stood. The medieval Royal Castle in Poznan has been reconstructed between 2011 and 2016. The city walls were taken down when the city expanded in the early 19th century, but the street layout of the Old Town still corresponds closely to that of the former protected city, with a grid of narrow streets. Surviving fragments of the walls, some of which have been further reconstructed, can be seen on Stawna Street, Ludgardy Street, next to Chopin Park in the south of the Old Market Square and best parts are on Masztalarska street in the north.

Another neighborhood of some interest is Jezyce, Poznan's increasingly hipster and food-obsessed district just west of the Old Town. Known for vegetarian and healthful eating establishments, Jezyce is also a place to sample culture at the New Theatre, Centrum Amarant, and Rialto Cinema.

The Kupala Night in Poznan happens in the second half of June each year, during the shortest night of the year (21/22 June). It is supposed to celebrate people who fall in love and make their love last throughout the year. The event itself is a Slavic tradition dating back for centuries. Here, it is connected to releasing thousands or millions of Chinese lanterns â a spectacle that is worth sticking around for.

The unusual Croissant Museum celebrates the unique recipe of St Martin's Croissant, which is one of the most famous and delicious pastries in Poland that dates back to the 19th century. On St Martin's day, Polish people in Poznan and nearby eat more than a million croissants. At the museum, you can watch and get an understanding of the process of baking St Martin's croissants, and taste them at the end.

The Historical Museum of Poznan has been located in the Town Hall since 1954 and is worth seeing both for its original interiors and the exhibitions. You will be able to see the cellars that used to belong to the first, original Town Hall of the 14th century. The exhibitions are divided into Renaissance artworks, pieces from the Prussian period, and photographs and documents referring to the life of the city from the 1920s to the 1950s.

Greater Poland is a vast region, rich in regional products (mainly potatoes), which have contributed to the creation of an extraordinary cuisine. You can notice also a significant influence of German cuisine, due to the invasion of Prussia in XIIIth century. Some of the following dishes and products are definitely worth trying while in the area: potato pancakes, potato bread, berry soup, or pork chop with plum. For dessert: St MartinÂ´s Croissant, the most typical product of the region.

Poznan has an extensive public transport system, mostly consisting of trams, such as the Poznan Fast Tram, and both urban and suburban buses. The main railway station is Poznan Central Station to the southwest of the city center; there is also the smaller Poznan Wschod and Poznan Garbary station northeast of the center and a number of other stations on the outskirts of the city. The main east-west A2 motorway runs south of the city connecting it with Berlin in the west and Lodz and Warsaw in the east; other main roads run in the direction of Warsaw, Bydgoszcz, Wagrowiec, Oborniki, Katowice, Wroclaw, Buk and Berlin. Poznan has one of the biggest airports in the west of Poland called Poznan-Lawica Airport.