How much does it cost to travel to Wroclaw?

How much money will you need for your trip to Wroclaw? You should plan to spend around zł111 ($28) per day on your vacation in Wroclaw, which is the average daily price based on the expenses of other visitors. Past travelers have spent, on average, zł30 ($7.53) on meals for one day and zł16 ($3.96) on local transportation. Also, the average hotel price in Wroclaw for a couple is zł131 ($33). So, a trip to Wroclaw for two people for one week costs on average zł1,558 ($391). All of these average travel prices have been collected from other travelers to help you plan your own travel budget.

A vacation to Wroclaw for one week usually costs around zł779 for one person. So, a trip to Wroclaw for two people costs around zł1,558 for one week. A trip for two weeks for two people costs zł3,117 in Wroclaw. If you're traveling as a family of three or four people, the price person often goes down because kid's tickets are cheaper and hotel rooms can be shared. If you travel slower over a longer period of time then your daily budget will also go down. Two people traveling together for one month in Wroclaw can often have a lower daily budget per person than one person traveling alone for one week.


How expensive is Wroclaw?

How much does a trip to Wroclaw cost? Is Wroclaw expensive? The average Wroclaw trip cost is broken down by category here. All of these Wroclaw prices are calculated from the budgets of real travelers.

While meal prices in Wroclaw can vary, the average cost of food in Wroclaw is zł30 per day. Based on the spending habits of previous travelers, when dining out an average meal in Wroclaw should cost around zł12 per person. Breakfast prices are usually a little cheaper than lunch or dinner. The price of food in sit-down restaurants in Wroclaw is often higher than fast food prices or street food prices.

The cost of a taxi ride in Wroclaw is significantly more than public transportation. On average, past travelers have spent zł16 per person, per day, on local transportation in Wroclaw.

How much does it cost to go to Wroclaw? Naturally, it depends on the dates. We recommend SkyScanner because they can find the best deals across all of the airlines.


How much money do I need for Wroclaw?

How much do tours to Wroclaw cost? Multi-day tours can often be an effecient way to see the highlights of a country or region.

Find a hostel, guesthouse, or B&B in Wroclaw

The 5 Best Hostels in Wroclaw, PolandWarsawLodz

Wroclaw On a Budget 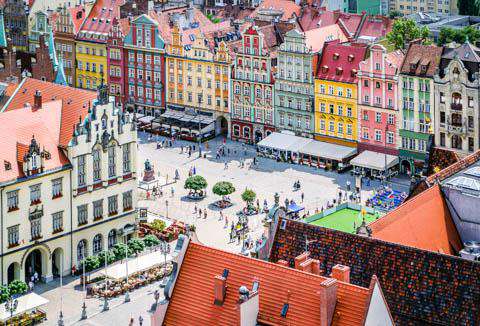 Wroclaw, Poland
Wroclaw still remains mostly undiscovered to travelers. It's the largest city and capital of Lower Silesian Voivodeship. It is also a historical capital of Silesia with a very rich history. The city's population is around 630,000 and there are over a million people in the metropolitan area. It's the fourth largest city in Poland and has an economy that is centered around manufacturing, banking, industry, tourism, and cultural events. The area has some unique architecture, beautiful rivers, and a vibrant cultural scene. The city has witnessed much turmoil, particularly during World War II and the years following. Today it has been beautifully restored and should be considered a highlight of a trip to Poland. Now is the time to visit, because as Poland gains ground within Europe, prices are sure to rise and the crowds will discover this city.

Popular sights within the city are the Rynek, or central square, Salt Square which has a flower market, Ostrow Tumski which are a group of islands in the Oder River, Saint Elizabeth's Church, the Centennial Hall, Park Szczytnicki, and the Eastern Park. Wroclaw also has many theaters around town so it is a great city to go and see a show. Opera is also popular here.

The Ryneck is the architectural center of the city. It's a must-see part of town, as it is one of the biggest town squares in Europe. It is also surrounded by many interesting buildings and the square itself is a great place to grab a drink and relax.

Wroclaw is divided into five boroughs. As a tourist, you'll be most interested in the areas that are located near the center of town, although there are some attractions that are found further out. Stare Miasto is the commercial and tourist heart of the city. It is the city's Old Town and has many attractions and cultural events. Srodmiescie is where Ostrow Tumski is. This is a series of beautiful islands that have cobblestoned streets and nice parks. Psie Pole is the northern borough. It has predominantly residential and industrial buildings with little to offer tourists. Krzyki is mostly a residential borough that has the city's main rail and bus transportation centers. Fabryczna is in the western part of the city. It was originally an industrial area but today it is a quiet part of town with the city's main sports stadium as well as the international airport.

Restaurants around town are diverse in price and style. You can easily pick up a cheap meal at a bar or fast food style restaurant. Pierogis are a popular option as are potato pancakes. Many of the "bars" in town are, in fact, self service canteen style restaurants. These are perhaps your cheapest and most filling option. You fill a dish with your chosen foods and the price is by weight. Most Polish dishes are quite hearty and filling so a little can go a long way.

Mid range and high end restaurants include international options with choices ranging from Georgian to Mexican. There are also some good pizza or pasta restaurants around town if you get tired of the Polish cuisine. The newest trend is an influx of Japanese and Korean restaurants. Sushi and Korean barbecue are available now as well.

You can walk around the city center and see many of the city's highlights. The suburbs and outlying attractions are generally accessible by bus or tram so no vehicle is necessary to fully experience this city. In total there are 60 bus lines and 25 tram lines. Road work and transit projects are common so you should expect some diversions and slow travel times in some areas.

You can buy tickets for the buses and trams all over town. Many places sell them including Ruch kiosks, post offices and newspaper stores. There are also modern ticket machines around the city center. Also, ticket machines are found on both buses and trams, but you have to pay with credit or debit cards. Make sure you validate your ticket as soon a you board the bus or tram, or you may face a serious fine.