How much does it cost to travel to Durban?

How much money will you need for your trip to Durban? You should plan to spend around R783 ($50) per day on your vacation in Durban, which is the average daily price based on the expenses of other visitors. Past travelers have spent, on average, R239 ($15) on meals for one day and R199 ($13) on local transportation. Also, the average hotel price in Durban for a couple is R736 ($47). So, a trip to Durban for two people for one week costs on average R10,962 ($695). All of these average travel prices have been collected from other travelers to help you plan your own travel budget.

A vacation to Durban for one week usually costs around R5,481 for one person. So, a trip to Durban for two people costs around R10,962 for one week. A trip for two weeks for two people costs R21,924 in Durban. If you're traveling as a family of three or four people, the price person often goes down because kid's tickets are cheaper and hotel rooms can be shared. If you travel slower over a longer period of time then your daily budget will also go down. Two people traveling together for one month in Durban can often have a lower daily budget per person than one person traveling alone for one week.


How expensive is Durban? How much money do I need for Durban?

How much does a trip to Durban cost? Is Durban expensive? The average Durban trip cost is broken down by category here. All of these Durban prices are calculated from the budgets of real travelers.

How much do vacation rentals cost in Durban? Prices vary by location, date, size of the place, and the level of luxury. See below for options.

How much does it cost to go to Durban? Naturally, it depends on the dates. We recommend Kayak because they can find the best deals across all airlines.

The price of renting a car in Durban will depends on dates, the type of car, the location, and your age. We recommend Kayak because they can find the best deals across all car rental companies.

Durban On a Budget 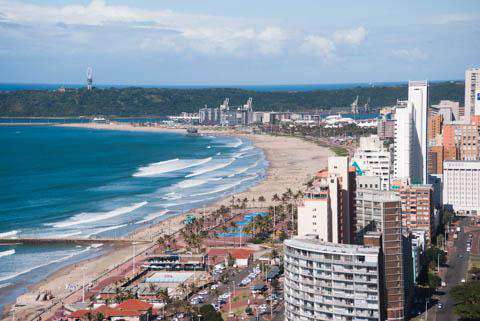 Durban, South Africa
The third largest city in South Africa, Durban sits on the east coast of the country in the province of KwaZulu-Natal. The city also has the country's most active port. The city's comfortable weather and vast beaches make it one of the country's major tourist centers. There's a population of about 3.5 million in the entire metropolitan area that spreads over 2,295 square kilometers.

Durban was originally founded by British settlers but today there is a large Indian population whose ancestors originally relocated here to work the sugar cane plantations. You'll find both English and Zulu spoken in this city.

There are a handful of sights and attractions in Durban including the Durban Botanical Gardens, the Mahatma Gandhi Settlement, KwaZulu Natal National Parks and Durban North Japanese Gardens. Also make sure and visit the Golden Mile, which has great beaches and world famous surfing. Crocodile Creek is a great place to see crocodiles as it has over 7000 Nile Crocodiles, Alligators, Caiman, snakes, and other reptiles. Berea is a ridge that looks out over the harbor, city center, and beaches and offers wonderful views of the area.

Downtown Durban is where you'll find a large number of tourist attractions including museums and the City Hall. The Golden Mile is the most prominent part of the city. This area has vast stretches of beach that attracts sunbathers, surfers, and bodybuilders. If you're interested in trying surfing for the first time, head to Addington Beach. Three miles from the city center is Kit Beach. This area has the world's best kite-surfing. There are also several more private beaches north of the Golden Mile. These include Country Club Beach, Tekwini Beach, and Laguna Beach. On the southern side of Durban is a Bluff that looks out on the harbor. The area also has Brighton Beach, Cave Rock Beach, Anstey's Beach, and Garvies Beach.

It is also worth visiting the Shark Institute, which offers boat tours of the area and will take you out to see the shark nets that protect swimmers and surfers from frequent shark attacks.

Other activities in the area include skydiving, yoga camps, golfing, and shopping.

Festivals in Durban include Poetry Africa, Time of the Writer, the Durban International Film Festival, Jomba! Contemporary Dance Festival, Awesome Africa, Fashion Week, and any number of Hindu Festivals throughout the year.

Because of the large Indian population, there is no shortage of excellent Indian restaurants throughout the city. Durban curry is a popular dish that can be either hot or mild. Bunny Chow is also a popular local specialty. The dish is made with a hollowed out piece of bread that is filled with a curry of your choosing. The most authentic Indian food can be found at the Indian neighborhoods around Victoria Market.

If you're looking for trendy cafes, head to the Morningside restaurants along Florida Road. This area provides outdoor seating and caters to upscale businessmen.

Although there is a bus system in Durban, it is not efficient and generally shouldn't be relied upon. The best way to navigate Durban is by car, but if you plan to rely on a GPS device, or even a street map, make sure it is up to date as it seems many street names have recently changed.

Taxis are a good option for travel if you don't have access to a personal car. Make sure you use a registered taxi, and you will have to call ahead as you can't pick a taxi up from the curb by simply waving it down. Some reliable taxi companies include Umhlanga Rocks Taxis, Eagle Taxi's, Zippy Cabs, and Mozzie Cabs. If you plan to rely on taxis, carry the numbers around with you as you never know when you will need them.

There are also minibus or group taxis. These usually travel a set route on a schedule and are less expensive than metered taxis. They are not particularly convenient for tourists as they usually take locals to and from work.

In the beachfront area there are rickshaws available that are specifically targeted at tourists. They generally offer a ride for entertainment as opposed to convenience.