How much does it cost to travel to Uppsala?

How much money will you need for your trip to Uppsala? You should plan to spend around kr1,170 ($119) per day on your vacation in Uppsala, which is the average daily price based on the expenses of other visitors. Past travelers have spent, on average, kr274 ($28) on meals for one day and kr169 ($17) on local transportation. Also, the average hotel price in Uppsala for a couple is kr1,543 ($157). So, a trip to Uppsala for two people for one week costs on average kr16,384 ($1,667). All of these average travel prices have been collected from other travelers to help you plan your own travel budget.

A vacation to Uppsala for one week usually costs around kr8,192 for one person. So, a trip to Uppsala for two people costs around kr16,384 for one week. A trip for two weeks for two people costs kr32,768 in Uppsala. If you're traveling as a family of three or four people, the price person often goes down because kid's tickets are cheaper and hotel rooms can be shared. If you travel slower over a longer period of time then your daily budget will also go down. Two people traveling together for one month in Uppsala can often have a lower daily budget per person than one person traveling alone for one week.


How expensive is Uppsala? How much money do I need for Uppsala?

How much does a trip to Uppsala cost? Is Uppsala expensive? The average Uppsala trip cost is broken down by category here. All of these Uppsala prices are calculated from the budgets of real travelers.

How much do vacation rentals cost in Uppsala? Prices vary by location, date, size of the place, and the level of luxury. See below for options.

How much does it cost to go to Uppsala? Naturally, it depends on the dates. We recommend Kayak because they can find the best deals across all airlines.

The price of renting a car in Uppsala will depends on dates, the type of car, the location, and your age. We recommend Kayak because they can find the best deals across all car rental companies.

Uppsala On a Budget 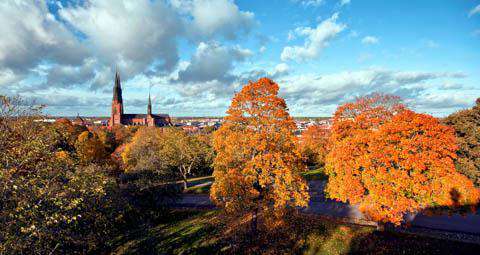 Uppsala, Sweden
Uppsala is a college town in Sweden, located about 40 minutes north of Stockholm. Home to two universities, Uppsala is the 4th largest city in Sweden and features a huge diversity in culture. The Fyris River divides the city into the historic and modern sides of the city, each one with their own unique culture and sights to see. The area features fairly cool weather year-round, with temperatures in the 30's Fahrenheit from November-April and May-October seeing temperatures in the 40's and 50's Fahrenheit. The best time to visit it from May-July when temperatures are at their highest and there's plenty of sunshine.

The city is divided into two sections by the Fyris River, with the historic side on the west and the residential and commercial side on the east. The majority of sights to see are on the west side of the river, where you'll find the famous Uppsala Cathedral. The huge Cathedral was built in the 13th century and is the largest church in Scandinavia. After wandering through the Cathedral, head to the Uppsala Castle that was built in the 16th century. Inside the Castle, you'll find large halls with paintings and other artifacts, along with the local art museum. While in the city, be sure to check out the Universities and their libraries; the Uppsala University was founded in 1477, making it the oldest university in Scandinavia and features stunning architecture. The Carolina Rediviva is the University's ginormous library that features the famous Silver Bible that dates back to the 16th century.

Uppsala essentially has two neighborhoods, the eastern side of the Fyris River and western side of the Fyris River. The eastern side is home to the commercial and residential area of the city while the western side is where you'll find the majority of historical sights. Both sides offer great accommodation and restaurant options. Just 40 minutes away is Sweden's capital city, Stockholm and 20 minutes away is the ancient Viking city of Sigtuna.

Uppsala is a great place for exploring the culture of Sweden thanks to their many festivals throughout the year. The Kulturnatten is a festival that happens on the second Saturday of September every year when people who work in culture take to the streets to show off their talents. On the last day of April every year, they host the Valborg Celebrations when people spend the day outside, drinking champagne, and singing by the castle. If you're not around during one of the festivals, you can still enjoy the culture on a boat trip along the Fyris River which takes you to Lake Eklon and past the castle. For university students around the world, you can purchase a Uppsala University Student Nation Guest Card that gets you into some of the best parties, pubs, and clubs in the area. The card also gets you discounts on food and drinks around the city.

With Uppsala being a college town, expect to find mostly relaxed restaurants with cheap eats. There is a large variety of cuisines, including Indian, Thai, Middle Eastern, and Italian. For more traditional Swedish fare, check out Peppar Peppar and Domtrappkallaren, two restaurants that serve traditional food. Coffee is very popular in the area, with cafes spotted all over the place.

Uppsala is near two airports, the Arlanda International Airport and the Skavsta Airport, both are less than an hour away from the city. From the airports, you can take a taxi, train, or bus service into the city. You can also take a train or bus into the city to the Uppsala Central Station from many of the cities in Sweden. Getting around Uppsala is best done on bike, the city is even called "Bike Town" due to the countless miles of biking paths throughout the city. If you prefer not to cycle, you can take the easy to use bus system or use taxis to get around.