How much does it cost to travel to Interlaken?

How much money will you need for your trip to Interlaken? You should plan to spend around Sfr169 ($179) per day on your vacation in Interlaken, which is the average daily price based on the expenses of other visitors. Past travelers have spent, on average, Sfr47 ($50) on meals for one day and Sfr9.51 ($10) on local transportation. Also, the average hotel price in Interlaken for a couple is Sfr195 ($206). So, a trip to Interlaken for two people for one week costs on average Sfr2,369 ($2,504). All of these average travel prices have been collected from other travelers to help you plan your own travel budget.

A vacation to Interlaken for one week usually costs around Sfr1,184 for one person. So, a trip to Interlaken for two people costs around Sfr2,369 for one week. A trip for two weeks for two people costs Sfr4,737 in Interlaken. If you're traveling as a family of three or four people, the price person often goes down because kid's tickets are cheaper and hotel rooms can be shared. If you travel slower over a longer period of time then your daily budget will also go down. Two people traveling together for one month in Interlaken can often have a lower daily budget per person than one person traveling alone for one week.


How expensive is Interlaken? How much money do I need for Interlaken?

How much does a trip to Interlaken cost? Is Interlaken expensive? The average Interlaken trip cost is broken down by category here. All of these Interlaken prices are calculated from the budgets of real travelers.

Looking for a hotel in Interlaken? Prices vary by location, date, season, and the level of luxury. See below for options.

How much does it cost to go to Interlaken? Naturally, it depends on the dates. We recommend Kayak because they can find the best deals across all airlines.

The price of renting a car in Interlaken will depends on dates, the type of car, the location, and your age. We recommend Kayak because they can find the best deals across all car rental companies.

What did other people spend on Transportation in Interlaken?

Typical prices for Transportation in Interlaken are listed below. These actual costs are from real travelers and can give you an idea of the prices in Interlaken, but your costs will vary based on your travel style.

What did other people spend on Food in Interlaken?

Typical prices for Food in Interlaken are listed below. These actual costs are from real travelers and can give you an idea of the prices in Interlaken, but your costs will vary based on your travel style.

Interlaken On a Budget 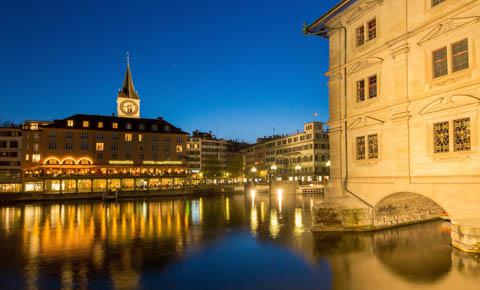 Interlaken, Switzerland
Interlaken is a small city that is located in the Bernese Highlands Region of central Switzerland. It sits pleasantly between two Alpine Lakes, Brienzersee and Thunersee. This scenic setting and its easy accessibility make it a popular base camp for travel into the Bernese Oberland Alps. It has become a top tourist destination in Switzerland and it is also a hub for outdoor sports enthusiasts, as there are plenty of things to do in Interlaken in the summer. Interlaken is a great hoping off point to explore many of the nearby mountains, lakes, and valleys. It offers easy transportation to most major Swiss cities by train or car.

Most people head out of Interlaken to see the surrounding areas, but there are several interesting places to explore in the city itself as well. The Hoheweg is the main shopping street in town and it runs between Interlaken West and Interlaken Ost Railway stations. You'll likely find yourself on the street frequently. It has a good number of souvenir shops and a view of the famous Jungfrau mountain. Also wander into the "Japanese Garden" which is a 150 year old Victorian Jungfrau Grand Hotel. Make sure you head out to Jungfrau-Aletsch-Bietschhorn which is a UNESCO World Heritage Site above Interlaken in the Bernese Alps. Unterseen is also worth visiting. It's a small town near the Interlaken West station. It has some nice shops and bakeries and is pleasant to walk around. For even more ideas, check out this terrific article about things to do in Interlaken, Switzerland which covers a variety of both indoor and outdoor activities.

Interlaken is located between two large lakes and is near many popular mountain resorts, many of which are connected by cable car or funicular railways. The town center has the highest concentration of shopping. The main shopping area is along the street of Hoheweg.

This city is also a great place to use a base on a winter ski trip in Switzerland because it's fairly central and has good connections to nearby mountain regions. As you're in the heart of the Alps, snow skiing and snowboarding are quite popular!

It's also fun to take a trip on the mountain railways. Jungfraujoch is the most well known and popular (ticket prices here). Another great option is the Brienzer Rothorn train ride, which provides some very scenic views from an old steam train.

Many traditional Swiss dishes are available in Interlaken. There are some touristy restaurants that have reliable and good food, and there are some hidden gems if you're willing to seek out places that are more off the beaten path. One popular favorite for tourists is Bebbis Restaurant. They serve traditional food including fondue and raclette. It's located conveniently near the Interlaken West train station. Another popular favorite among out-of-towners and locals alike is Grand Cafe Restaurant Schuh, which is one of the oldest restaurants in the city. It has a chocolate show and a great view of the city, making it a favorite for tourists. You can choose between three types of fondue as well as raclette.

International food is also readily available in Interlaken. Kang Chon Central, near Interlaken West station, has Korean food that is reasonably priced. My Little Thai is decent Thai food for those on a budget. Dinner reservations are recommended. El Azteca is a Mexican restaurant that is located in the Hotel Blume. It is good and authentic but can be expensive, particularly for those who are used to Mexican food prices in the United States.

If you're on a particularly tight budget, there are plenty of supermarkets where you can buy supplies and prepare your own meals. Coop Supermarket has the makings for sandwiches and is affordable and convenient. ALDI is a German supermarket chain that is cheap and perhaps your best option if you're looking to save money on food. They have the supplies to make good sandwiches, a microwave oven you can use, and entrees that are ready made. They are inconveniently located though, outside of the town center.

Most people choose to walk or bike around Interlaken. It is a small city and most of the points of interest are accessible on foot. Taxis are also available and can usually be found at either the train station or at larger hotels.

There are two railway stations in Interlaken. These are Interlaken Ost and Interlaken West. They are both served by the BLS AG's Thunerseee line that connects Spiez, Thun, Bern and other cities throughout Switzerland. The ost station is also where you will find the Berner Oberland railway. This is the first step for many routes into the Jungfrau region, including Europe's highest station at the Jungfraujoch.

There are two funicular railways that take visitors up to enjoy view of the surrounding area. These are the Harderbahn and the Heimwehfluhbahn.

Additionally, there are local and regional buses that are run by PostBus Switzerland. The regional bus service to Thun is run by Verkehrsbetriebe STI.