How much does it cost to travel to Lucerne?

How much money will you need for your trip to Lucerne? You should plan to spend around Sfr156 ($168) per day on your vacation in Lucerne, which is the average daily price based on the expenses of other visitors. Past travelers have spent, on average, Sfr45 ($49) on meals for one day and Sfr9.14 ($9.82) on local transportation. Also, the average hotel price in Lucerne for a couple is Sfr200 ($215). So, a trip to Lucerne for two people for one week costs on average Sfr2,190 ($2,352). All of these average travel prices have been collected from other travelers to help you plan your own travel budget.

A vacation to Lucerne for one week usually costs around Sfr1,095 for one person. So, a trip to Lucerne for two people costs around Sfr2,190 for one week. A trip for two weeks for two people costs Sfr4,380 in Lucerne. If you're traveling as a family of three or four people, the price person often goes down because kid's tickets are cheaper and hotel rooms can be shared. If you travel slower over a longer period of time then your daily budget will also go down. Two people traveling together for one month in Lucerne can often have a lower daily budget per person than one person traveling alone for one week.


How expensive is Lucerne? How much money do I need for Lucerne?

How much does a trip to Lucerne cost? Is Lucerne expensive? The average Lucerne trip cost is broken down by category here. All of these Lucerne prices are calculated from the budgets of real travelers.

Find a hostel, guesthouse, or B&B in Lucerne

How much does it cost to go to Lucerne? Naturally, it depends on the dates. We recommend SkyScanner because they can find the best deals across all airlines.

The price of renting a car in Lucerne will depends on dates, the type of car, the location, and your age. We recommend SkyScanner because they can find the best deals across all car rental companies.

What did other people spend on Entertainment in Lucerne?

Typical prices for Entertainment in Lucerne are listed below. These actual costs are from real travelers and can give you an idea of the prices in Lucerne, but your costs will vary based on your travel style.

The Best Hostels in Lucerne for Backpackers, Couples, and FamiliesGrindelwaldZurichGenevaBaselBern

Lucerne On a Budget

Lucerne, Switzerland
Lucerne is a relatively small city in the center of Switzerland. It is located across the lake from Altdorf and it has a thriving tourism industry. It's close proximity to many of the major sights in the country make it a great base for exploration. Many people use it as a jumping off point for exploring Mount Rigi and the Rutli Meadow.

The city itself is quite charming and a pleasure to explore on its own. It has a population of just over 80,000, making it the most populous city in Central Switzerland. It is also a hub for transportation and government in the region.

Although many people use Lucerne as a base to explore Central Switzerland, the city itself has a lot to offer travelers. The Chapel Bridge is the landmark of the city. It's the oldest woodbridge in all of Europe and dates back to the 14th century. Unfortunately the original bridge burned in 1993 but was very quickly rebuilt. The old city wall is also interesting to see. It has several towers including the clock tower that chimes one minute before the hour so that it has the first strike in town.

Other interesting sights around town include Alpineum, the Glacier Garden, Bourbaki Panormama, the KKL, and the Lion Monument. Interesting museums include the Swiss Transport Museum, the Lucerne Art Museum, the Rosengart Collection, and the Richard Wagner Museum.

Lucerne is a small city and most visitors spend the majority of their time in the Old Town. The city is located on the shore of Lake Lucerne and has views of Mount Pilatus and Rigi in the Swiss Alps. Because of it's proximity to many outdoor destinations, the city makes a popular base for exploring the area.

Popular activities in the area include climbing Mount Pilatus, the top of which can be reached by either hiking or taking the cable car. If you choose to hike you can expect the ascent to take about four hours. Some people also decide to take a boat tour that will give you a ride between Lucerne and Alpnachstad.

There are a handful of other mountains you can visit that are near Lucerne. Many can be visited as day trips and will offer you a great overview of the beautiful surrounding countryside. Some of the popular mountains include Mount Rigi and Mount Titlis.

Lucerne also has a popular Carnival festival that is quite impressive if you're in the area.

Food can be expensive in Lucerne, like it is elsewhere in Switzerland. There are a couple of budget options near the train station. Alternatively, you can pick up some food at the market and make a meal out of bread, cheese, meats, and some fruit. Migros and Coop are both huge supermarket chains that are generally affordable. You'll find small Migros and a larger Coop at the train station where you can grab something to eat as you arrive or leave the city. The chains are also present elsewhere around town and make a convenient place to grab some cheap food. If you don't want to prepare your own meal, then there are some delicious, although expensive restaurants around town.

It's easy to walk around and reach most places on foot, so a car is definitely not necessary. The Old Town area is quite small, and all of the other, more distant attractions are still within a half hour's walk. Not only is it easy to walk around Lucerne, but it's also very enjoyable and highly recommended.

If you decide to take public transit, then there is an extensive city bus system. Further out attractions such as the Lido Beach and the Swiss Transport Museum can be reached by bus. There are also several boats an hour that can be caught in front of the central railway station. Also near the central railway station are bicycle rental facilities. There are bike lanes on most secondary streets and most drivers around town are comfortable with bicyclists.

If you're using Lucerne as a base to explore Central Switzerland, then you will make good use of the Swiss Federal Railway, the Schifffahrt Vierwaldstattersee, or the private transit companies that travel around the country. There are frequent connections and it is relatively easy to get around the area. 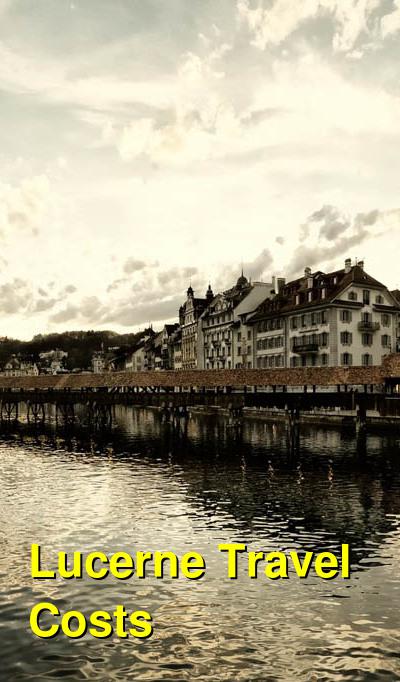 By backpackguru in Entertainment
Right before lent every year, Lucerne is one of several cities in Switzerland that celebrates a carnival. Lucerne's festival is most famous for its "march any direction you like" street parades, which can be as chaotic as the name implies. Carnival goers where elaborate masks and there is plenty of food, music, and entertainment. It's a particularly interesting time to be in Lucerne.