How much does it cost to travel to Lausanne?

How much money will you need for your trip to Lausanne? Also, the average hotel price in Lausanne for a couple is Sfr513 ($576). All of these average travel prices have been collected from other travelers to help you plan your own travel budget.

A vacation to Lausanne for one week usually costs around Sfr0.00 for one person. So, a trip to Lausanne for two people costs around Sfr0.00 for one week. A trip for two weeks for two people costs Sfr0.00 in Lausanne. If you're traveling as a family of three or four people, the price person often goes down because kid's tickets are cheaper and hotel rooms can be shared. If you travel slower over a longer period of time then your daily budget will also go down. Two people traveling together for one month in Lausanne can often have a lower daily budget per person than one person traveling alone for one week.


How expensive is Lausanne? How much money do I need for Lausanne?

How much does a trip to Lausanne cost? Is Lausanne expensive? The average Lausanne trip cost is broken down by category here. All of these Lausanne prices are calculated from the budgets of real travelers.

Find a hostel, guesthouse, or B&B in Lausanne

The Best Hostels in Lausanne for Backpackers, Families, and CouplesZurichGeneva

Lausanne On a Budget

Lausanne, Switzerland
Located on Lake Geneva, Lausanne is the capital city of French-speaking region of Vaud, Switzerland. The slopes of Lake Geneva's shores are known for growing wine, while the city of Lausanne sprawls across three hills. The city is also home to the International Olympic Committee, the Olympic Museum, and lakeshore Olympic Park, as well as an old town that dates to medieval times.

Lausanne Old Town is a quaint medieval part of the city, whose most prominent feature is a cathedral that stands at the center of everything. The cobbled streets here are car-free, while a watch man in the clock tower shouts out the hours from 10pm to 2 am, in a tradition that dates back to 1405. Visitors are welcome to climb the cathedral's tower for a nice view of the city below.

The city is also host to a number of museums dedicated to the history, art, and culture of the region and beyond. The Olympic Museum, for example, provides an overview of the history of the Olympic Games from the first 1896 summer games in Athens through to the present day. The Musee de l'Art brut is another unique venue, featuring a worldwide collection of works of art created by outsiders in psychiatric clinics and prisons. And then there is the Musee Historique de Lausanne which houses a collection of maps, images, and documents about the history of Lausanne and the Lake Geneva Region from the earliest records to present day.

Other notable landmarks include the Church of St. Francis, ruins of a medieval rampart called La Tour d'Ale, and a gift from the King of Thailand built in 2007 called the Thai Pavilion. There are also a number of parks throughout the city.

Cite is probably one of the most visited neighborhoods of Lausanne, a hill encompassing much of the old city with many historic landmarks including the cathedral, which is regarded as Switzerland's most impressive piece of early Gothic architecture. The medieval center surrounding the cathedral features shopping streets paved in cobblestone, as well as small alleyways with cafes and boutique shops. Ville Marche is also a part of the old city with a number of outdoor markets, some of which include Place de la Palud, Place St. François, and Place Riponne. Beyond these, the next most visited neighborhood is the pretty waterfront area of Ouchy, which features shopping, hotels, and restaurants with beautiful views of the lake and the Alps.

Exploring the historic sites of the old town, indulging in Swiss cuisine, and shopping Lausanne's markets make up just a few of the city-going activities available. Additionally, there are a number of museums, the beautiful lakefront port of Ouchy, and also opportunities for swimming or boating on the lake itself. If you seek a view from above visit Sauvabelin tower just north of the city center. Along with views of the lake and the Alps, there is also a free zoo and the park of the Fondation de l'Hermitage, which features changing art exhibits in a setting dating back to the 19th century. Other activities include a concert or show at one of Lausanne's theatres, as well as a variety of festivals occurring throughout the year. Many of these celebrations revolve around music, one being the Festival de la Cite in July where musical, theatrical, opera, and many different types of acts take place in the old city of Lausanne.

Lausanne's dining scene is delectable and diverse, from reasonably priced cafes to Michelin-starred restaurants. Food throughout Switzerland will vary, though some common favorites include cheese fondue, Swiss chocolate, and of course Swiss cheese. Raclette and Croute au fromage (a Swiss version of cheese on toast), come more specifically from the French-speaking part of Switzerland where Lausanne is located. With its location on a lake, the city also has fresh fish dishes with powan, perch, and trout being the most commonly servedand, being a wine region, there will be many local vintages available to accompany any meal. Visitors will find plenty of restaurants in the old city as well as along the waterfront of Ouchy.

By plane, Geneva airport is the closest and is served by most European carriers and four daily trans-Atlantic flightson from Washington-Dulles on United, one from New York's John F. Kennedy on Swiss, one from Newark on Continental, and one from Montreal on Air Canada. Zurich Airport is also popular, with more frequent trans-Atlantic service mainly via Swiss Airlines.

Direct trains between Geneva Airport and Lausanne take about 45 minutes and normally run about four times per hour.

International buses arrive daily from Spain, France, and other major cities in Central Europe. Many buses pass through Geneva or Basel before stopping in Lausanne. 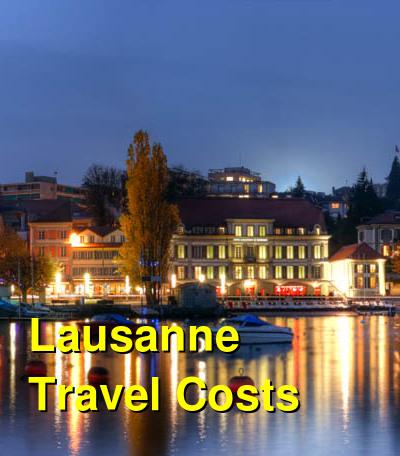