How much does it cost to travel to Bern?

How much money will you need for your trip to Bern? You should plan to spend around Sfr182 ($186) per day on your vacation in Bern, which is the average daily price based on the expenses of other visitors. Past travelers have spent, on average, Sfr44 ($45) on meals for one day and Sfr24 ($25) on local transportation. Also, the average hotel price in Bern for a couple is Sfr236 ($240). So, a trip to Bern for two people for one week costs on average Sfr2,554 ($2,603). All of these average travel prices have been collected from other travelers to help you plan your own travel budget.

A vacation to Bern for one week usually costs around Sfr1,277 for one person. So, a trip to Bern for two people costs around Sfr2,554 for one week. A trip for two weeks for two people costs Sfr5,107 in Bern. If you're traveling as a family of three or four people, the price person often goes down because kid's tickets are cheaper and hotel rooms can be shared. If you travel slower over a longer period of time then your daily budget will also go down. Two people traveling together for one month in Bern can often have a lower daily budget per person than one person traveling alone for one week.


How expensive is Bern? How much money do I need for Bern?

How much does a trip to Bern cost? Is Bern expensive? The average Bern trip cost is broken down by category here. All of these Bern prices are calculated from the budgets of real travelers.

Looking for a hotel in Bern? Prices vary by location, date, season, and the level of luxury. See below for options.

How much does it cost to go to Bern? Naturally, it depends on the dates. We recommend Kayak because they can find the best deals across all airlines.

The price of renting a car in Bern will depends on dates, the type of car, the location, and your age. We recommend Kayak because they can find the best deals across all car rental companies.

Bern On a Budget 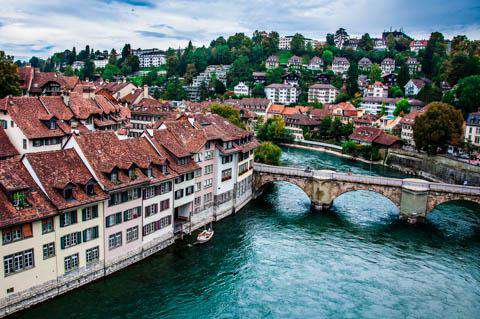 Bern, Switzerland
The capital city of Switzerland, Bern, is a surprisingly small city with a population of only about 130,000. It's located on a peninsula that is created by the turns of the River Aare. The city is listed as a UNESCO World Heritage Site because it has a wonderfully preserved old town area. There are about four miles worth of quaint walkways that are lined with clock towers and fountains.

The city dates back to 1191 when it was founded by Duke Berthold V von Zahringen. It was originally part of the Holy Roman Empire and in 1353 it joined the Swiss confederation. In 1848 it became the Swiss capital.

The most popular sights around the town include the Bundeshaus (the Federal Palace of Switzerland), Einsteinhaus, where Albert Einstein lived with his wife during his time in Bern, Zentrum Paul Klee, and Zytglogge, which is the Clock Tower near the center of the old town that dates back to the 13th century. Bern has a rich history of culture and the arts. This can be seen in the city's many museums and outdoor galleries. Popular museums include the Bern Historical Museum, Kunstmuseum (the Museum of Fine Arts), and the Swiss Alpine Museum.

There are some fun activities in the city that are worth participating in as well. Make sure you allow yourself some time to enjoy a swim in the River Aare if you happen to be in town during the warmer summer months. Also take time to head to Gurten, which is a hill located just outside of town. From there you can enjoy views of the city and visit a park that is popular with locals. Rosengarten is another small park with a great view of the old town. It's located near the bear pits and is a popular place to visit around lunch time. To reach the park just take bus 10 from the railway station toward Ostermundigen Ruti.

Some of the more popular festivals in the area include Gurtenfestival in July, the popular International Jazzfestival Bern, and Buskers Bern, a festival that highlights the city's street musicians.

Although the nightlife in Bern may not compare to Zurich or Paris, you will find a good number of bars where you can grab a drink and enjoy a chat with friends. The options are more relaxed and mellow than in larger cities, but for many travelers this is an enjoyable way to spend the evening.

Dining in Switzerland can be shockingly expensive. Make sure you allow yourself time to choose a decent affordable restaurant, as this will help you find the best deal. Touristy restaurants, particularly traditionally Swiss restaurants, have incredibly inflated prices. Unfortunately, this means that if you're looking for a more reasonably priced meal you may have to skip the Swiss restaurants and try a different international cuisine such as Asian or Italian. These international options are popular with locals and therefore have more affordable pricing.

You can easily walk around the old town area and city center. There are shopping areas and many restaurants that you can reach on foot, but if you're hoping to venture farther outside of the city center then you'll want to use the city's excellent public transportation system. This system includes trams, trolleybuses and regular buses, as well as a suburban rail system. The service is frequent and travels into the surrounding suburbs. The tram and bus systems are run by Bernmobil. The S-Bahn rail system travels to nearby cities including Biel, Thun, Fribourg or Solothurn.

It is best to avoid driving in Bern. It is hard to find free parking, and paid parking is very expensive. Because the city is so easy to navigate on foot, or with public transit, then bringing a car is more trouble than it's worth. You can park outside of the city center in the "park and ride" area and take public transportation into town.

Biking is another good option. There are free bikes available for four hour periods through "Bern rollt". If you want to pick up a bike, then you can find them at Milchgassli/Hauptbahnhof all year around, and Hirschengraben or Zeughausgasse between the months of May and October.