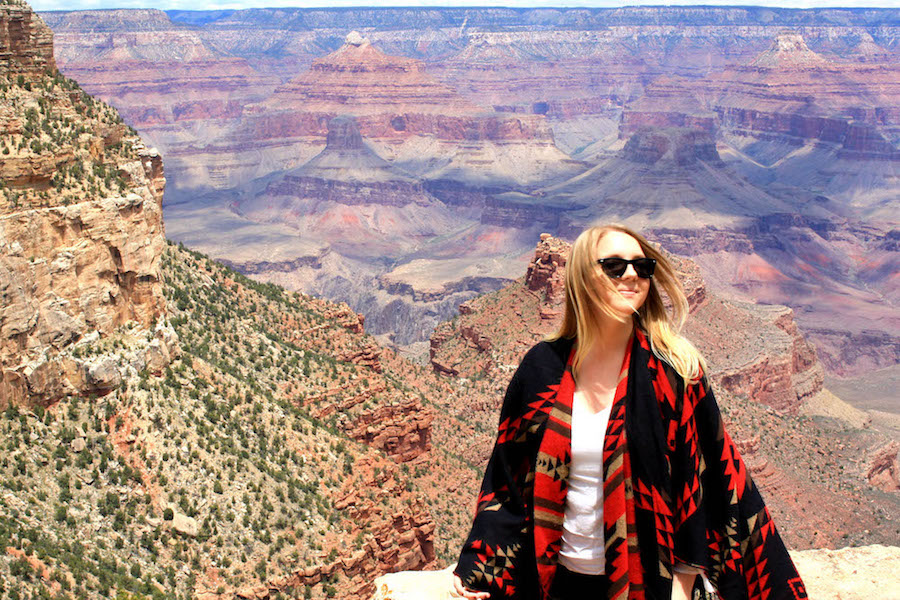 As part of our ongoing interview series where we find out what inspires people to travel, we caught up with Taylor Herperger. She regularly blogs at Taylor on a Trip, where you can keep up with her adventures. Originally from Saskatchewan, Taylor then lived in Toronto before heading off on her long-term European jaunt. And now she lives in Medicine Hat, Alberta. So, let’s find out what motivates her to travel and how she makes it work for her.

I honestly don’t remember a time when I wasn’t traveling to some degree. Growing up, my parents made it a priority to take my younger brother and me on family vacations (a lot of Griswold moments were had), and so I was lucky to see a lot of Western Canada in my formative years.

Then, when I was seventeen, I had my first overseas travel experience when I spent a couple of weeks in Greece, Italy, and Spain. It was an eye-opening experience that pretty much sealed the wanderlust-fuelled deal.

Where have you been recently?

Given that I only plan on staying in Medicine Hat for a total of a year, I’ve been really trying to check out what’s in my backyard as much as possible. Since landing here at the end of May, I’ve taken trips to places such as Drumheller, Dinosaur National Park, The Great Sand Dunes, and Cypress Hills National Park.

I also have excursions to Banff, Waterton Lakes, and Glacier National Park (Montana) planned over the next couple of months.

What is the most interesting place you’ve ever been?

This is a hard question! There are just so many places that have completely blown me away. That said, one of the top 5 most interesting places I’ve been, and this is kind of personal to me, is Hungary. I have Hungarian ancestry and, growing up, I thought I could honor this ancestry by simply eating my bodyweight in cabbage rolls and torte.

Then, when I got to Hungary, I visited places such as the House of Terror in Budapest and had somewhat of a naïve realization that I don’t know the first thing about what it means to be Hungarian. It was a humbling moment for me and gave me perspective on how incredibly far removed I am from even a few generations before me.

What is the craziest travel story you have? Has anything weird or strange or chaotic happened to you during your travels?

It’s not a specific story, more like an ongoing phenomenon, but in my travels, I have randomly met a lot of magicians. I meet them in bars, subway platforms, restaurants, museums… never anywhere you’d expect there to be a magician present. San Francisco, Galway, Toronto, Zagreb, New York City…

See Also  The Places, People, and Stories of Hanne's Travels

I don’t find them; they find me.

What inspired you to start blogging about your travels? What is the theme or topic of your blog?

I’ve been a freelance writer for various online publications for about seven years now, and before that, I was the kid writing stories and poetry in her notebook in her spare time. Writing is truly one of the greatest loves of my life.

So, when I launched Taylor On A Trip in 2015, it was out of the desire to have my own platform to write what I was passionate about. Plus, at the time of the launch, I was working at a major record label indulging in another great love of mine, music. It only made sense that I would blend these two loves together into a blog niche.

In addition to various travel musings and city guides, my blog has a lot of information on places of musical significance – the site of Woodstock, CBGB’s, The Beatles in Liverpool and Hamburg, Joshua Tree Inn, Laurel Canyon in the 60’s/70’s, etc.

How do you save money before and during a trip?

Before heading out on a trip, I save money primarily by taking as many freelance writing jobs as I possibly can. Of course, I’m also a pretty frugal person and have taken to the minimalist philosophy in recent years, so I try my best to keep my expenditures to just the necessities.

During a trip, I save money a bunch of different ways. I am a big fan of free city walking tours to get acquainted with a city, taking public transportation everywhere, eating local food, and staying in accommodations such as short-term rentals, tents, or hostels.

Do you have any travel tips or advice for others?

Never be afraid to go off the beaten trail or out of your comfort zone. It’s only when I’ve pushed myself to try new things or explore a destination that’s not plastered all over the internet that I have come back with some of my favorite stories.

Also, never expect to arrive in a foreign country in the middle of the night and just sleep in the bus station without making sure that there is indeed a bus station first.

What are your future plans, travel or otherwise?

Nothing is booked yet, but when I’m done with my stint in Alberta, I’m planning to spend a few months in Asia. Until then, whichever way the wind blows!

See Also  The 13 Best Free Things to do in Berlin