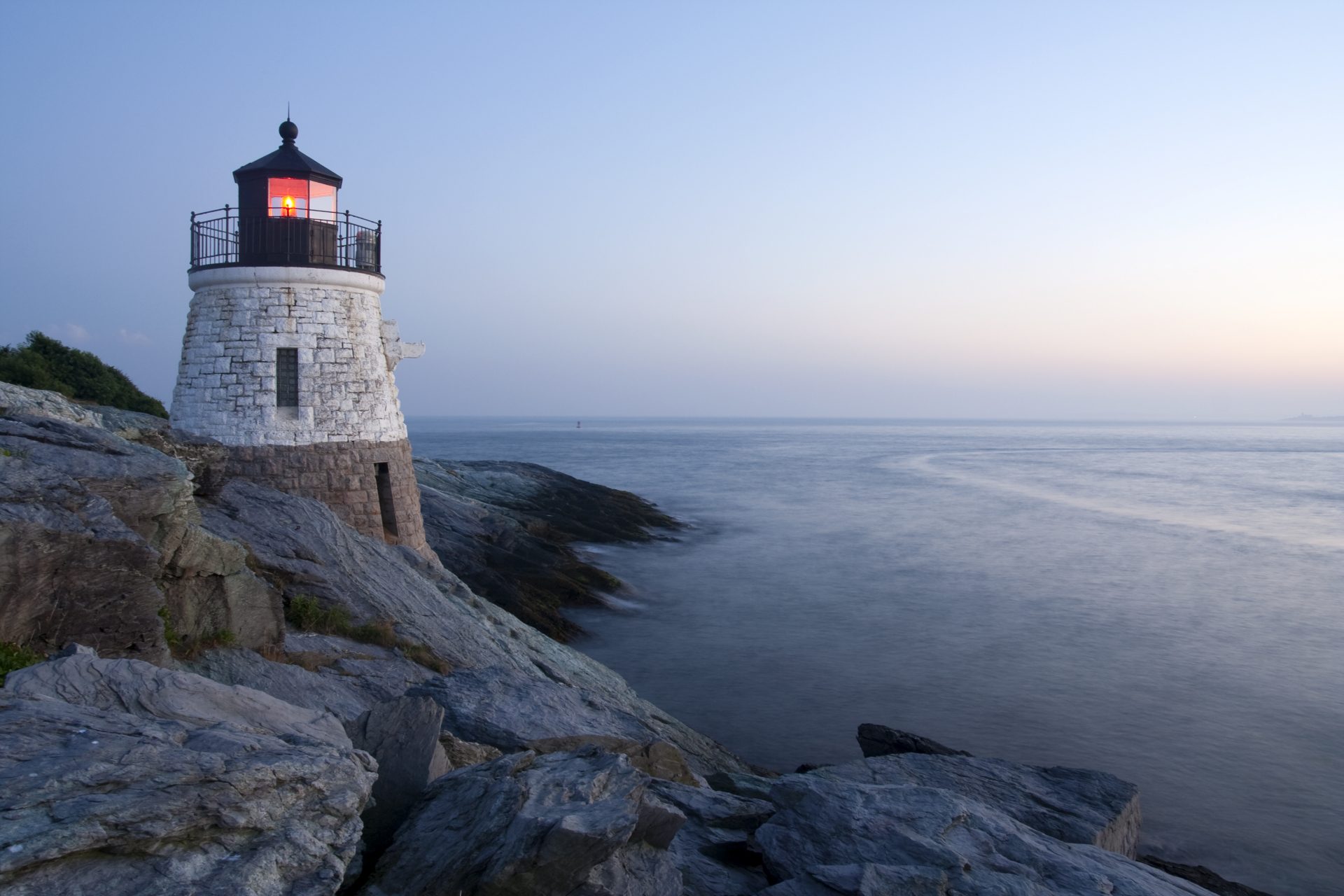 Summer in Newport was once an experience reserved for the select few. Just ask the Rockefellers or the Vanderbilts, whose extravagant summer homes stand tall and decorated over the coastal waters of Newport, Rhode Island. These mansions were once the social residences of the nation’s great tycoons, host to balls, galas, and dinners fit for royalty. Today visitors are welcome to walk in the footsteps of those families, visit each gold-plated room, and admire every detailed portrait and painting—Gilded Age America in all of its glory. But the culture of modern-day Newport is just as thriving in more ways than one. Visit the mansions and appreciate Newport’s rich history, but also experience its musical heritage, explore its bustling harbor, and eat all of the seafood you can!

In mid-summer, the grounds of the estates are blooming with bountiful blue hydrangeas—sweet scents mingling with the freshness of a salty sea breeze. Marble House is probably the most ornate of the “cottages,” with marble making up 500,000 cubic feet of the building’s construction and dining room chairs so weighted with bronze that servants were once stationed with the sole purpose of moving each chair for guests. Rosecliff was modeled after the Grand Trianon—the garden retreat of French kings at Versailles—and is best known as the film location for the lavish party scenes of 1974’s The Great Gatsby. Other notables include The Elms and Chateau-sur-Mer, but more often than not visitors come to see The Breakers. Summer home to the Vanderbilt family, this villa is perhaps the grandest. Detailed with family symbols and iconography of the sea, the Breakers has become representative of the wealth and prominence that the family attained in turn-of-the-century America. To experience these architectural gems along with the beauty of the shoreline, be sure to spend some time on the Cliff Walk, a 3.5-mile National Recreation Trail that runs along Newport’s eastern coast right along the mansions’ backyards.

Today Newport attracts a new kind of culture, one still representative of Americana through music. Each year the town is host to the Newport Folk Festival as well as the Newport Jazz Festival, both held at Fort Adams State Park. Located in the harbor mouth of Newport, Fort Adams itself is another piece of American history with a large fortification that was active from 1841 through the first half of the 20th century. During festival season, the thick stone walls serve as barriers to buffer the many musical acts that festival-goers come to enjoy. Since the 1950s, the festivals have seen musicians including Bob Dylan, Johnny Cash, Roger Waters, Kris Kristofferson, James Taylor, B.B. King, Led Zeppelin, Jethro Tull, The Allman Brothers Band, Miles Davis, and many more, as well as contemporary artists like Brandi Carlyle, Mumford and Sons, Lord Huron, Daniel Rateliff and the Night Sweats, Passenger, and others. They are usually scheduled back-to-back—the Folk Festival during the last weekend of July and the Jazz Festival during the first weekend in August. Festival week is a piece of Newport culture not to be missed.

See Also  The Best Things to do in the Pocono Mountains

All of these festivals are just one of the reasons why Newport is on the list of the best places to visit in New England in the Summer. With great weather and fun activities, you really can’t go wrong.

Any visit to the New England coast cannot be complete without seafood, or more specifically lobster rolls. Authentic lobster rolls are traditionally served cold on a toasted, buttered roll with lettuce and a little bit of mayonnaise. We asked a few Newport locals where to get the best lobster rolls, and the consensus was Flo’s Clam Shack. Standing on a street corner near Easton’s Beach and decked out with fishing décor galore, Flo’s requests that visitors park in their lot out back. From here, enter a small boardwalk from the rear enclosed within a bamboo forest and grab a menu from an old mailbox stationed on a wooden post. When you reach the end of the boardwalk, you can place your order—be it lobster rolls or Flo’s world famous clam fritters. You will not be disappointed.

There are also plenty of dining opportunities near the harbor along Thames Street. Here you can find outstanding seafood dinners and drinks at a variety of restaurants, such as the Red Parrot, which boasts unique menu items such as Shark Bites and Lobster S’Mac-n-Cheese (the ‘S’ is a kick of Sriracha chili sauce). The harbor is also bustling with boardwalk-type shops and places to satisfy your sweet tooth, like Kilwin’s Chocolates & Ice cream (which also sells salt water taffy). Parking is metered and can be difficult on the main stretch, so you may want to park a block or two inland, which is easier to find and often not metered.

Off the Beaten Path

After the thrills and sights of Newport’s coastal culture—both new and old—the best way to wind down is to wander along Rhode Island’s rocky shore at Brenton Point State Park. You might see people flying kites in the evening breeze, collecting pebbles down by the water, or convening by crackling campfires as the sun begins to turn the sky pink.

The State Park is also home to the remnants of what was formerly one of Newport’s grandest mansions—The Bells. Once known as The Reefs, the house began its decline as a consequence of a divorce of its owners in 1928. The home later housed gunnery personnel during World War II, but caught fire in 1961, and was mostly demolished by 1963. The imposing structures that remain today are actually the stables, which gives visitors a sense of how impressive the house itself must have been.

As sunset approaches, the forgotten ruins of grandeur sink into the shadows of trees that have outgrown them. There is a lookout tower nearby for viewing the ruins, but as the sun goes down the real show is down by the rocky coast where the water turns to fire with the pink and orange of the sky above. A quiet sunset showcasing nature’s splendor is the perfect way to reflect on Newport’s rich culture and history—just as bright!