Should you visit Kruger National Park or Drakensberg?

Which city is more affordable and which is best for your travel style? If you're trying to figure out where to go next, comparing the travel costs between Kruger National Park and Drakensberg can help you decide which place is right for you.

Kruger National Park, in northeast South Africa hugs the border of Mozambique in the east, Zimbabwe in the north, and the Crocodile River to the south. Covering nearly 20,000 square kilometers, it hosts a variety of habitats with a thriving population of wildlife and indigenous plant species, making it a safari destination like no other.

Drakensberg, whose name derives from the Dutch and means "mountains of the dragons," is a mountainous region which encompasses a vast amount of South Africa's interior, extending into neighboring countries as well. It hugs the eastern border of Lesotho, attracting visitors for hiking, backpacking, and admiring the natural wonders of the landscape.

Which city is cheaper, Drakensberg or Kruger National Park?

The average daily cost (per person) in Kruger National Park is $85, while the average daily cost in Drakensberg is $95. These costs include accommodation (assuming double occupancy, so the traveler is sharing the room), food, transportation, and entertainment. While every person is different, these costs are an average of past travelers in each city. Below is a breakdown of travel costs for Kruger National Park and Drakensberg in more detail.

Double occupancy rooms typically run around $100 in Kruger National Park For nicer amenities and a premiere location, you can expect to pay a bit more.

An average hotel room with basic furnishings costs about $80 in Drakensberg For the most convenient locations and nicer amenities you can expect to pay a bit more.

The average traveler spends about $16 per day in Kruger National Park for food, but obviously this is dependent on the type of restaurant and the amount of food ordered. To save money you can grab a lighter lunch or dinner, or you can try fast food or street food.

The average traveler spends about $17 per day in Drakensberg for food, but obviously this is dependent on the type of restaurant and the amount of food ordered. To save money you can grab a lighter lunch or dinner, or you can try fast food or street food.

To get around in Drakensberg, the average visitor spends $72 per day, per person. This includes the costs of taxi rides and private drivers as well as public transportation, which tends to be much more affordable.


Is it cheaper to fly into Kruger National Park or Drakensberg?

Prices for flights to both Drakensberg and Kruger National Park change regularly based on dates and travel demand. We suggest you find the best prices for your next trip on Kayak, because you can compare the cost of flights across multiple airlines for your prefered dates.

Sightseeing expenses in Kruger National Park, including the cost of admission tickets for day tours, museums, and attractions, usually cost an average of $22 per day, per person.

In Drakensberg, the costs for things to do, activities, admission tickets, and other sightseeing expenses are on average $9.09 per person, per day.


When comparing the travel costs between Kruger National Park and Drakensberg, we can see that Drakensberg is more expensive. However, the two cities are actually relatively comparable in price, as the difference is somewhat minimal. Generally, this means that you could travel with generally the same travel style and level of luxury in each place. Since both cities are in Africa, it's no surprise that their costs are relatively close, as many destinations here have somewhat similar travel prices overall. 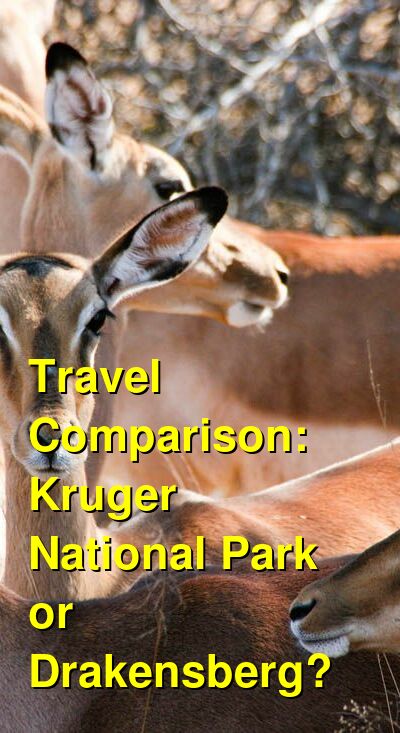