A Travel Price Comparison for United States of America Miami vs. New York City for Food, Nightlife, Music, and Families

Should you visit Miami or New York City?

Which city is more affordable and which is best for your travel style? If you're trying to figure out where to go next, comparing the travel costs between Miami and New York City can help you decide which place is right for you.

Miami is a high energy, glamorous, and exciting beach city. It's an amazing and huge city with tons of activities and things to do. Other reasons to visit include live music, food, and beaches.

New York City is a vibrant, energetic, and cosmopolitan city. It's an amazing and huge city with tons of activities and things to do. It's a gorgeous place to visit. It's also known for nightlife, live music, and food.

How is Miami different from New York City?

Which is Better for a Holiday?

Is Miami or New York City better for Food?

Picking the best between Miami and New York City can be difficult as they are each unique in their own way.

Miami has long been recognized as a culinary destination. The city's food scene is as diverse as its population. It is known for its Stone Crabs, fish sandwiches, Cuban sandwiches, and Key Lime pie.

Eat your way through New York City, as it has many local or world renowned restaurants to choose from. The city has a diverse variety of restaurants, from local dives to Michelin star options. Quintessential NYC dishes include NYC pizza, NYC hot dogs, bagels, and Chinese dim sum.


Is Miami or New York City better for Nightlife?

Party-goers will find similar levels of energy in Miami and New York City.

Miami has a colorful and one-of-a-kind nightlife scene. From the posh nightlife clubs in South Beach, to the local salsa dancing venues in Little Havana, Miami is a city that thrives with energy.

New York City is a world class party destination. Known as the city that never sleeps, you can be assured that NYC has some of the best nightlife in the world. Several famous clubs include Paul's Cocktail Lounge, Le Bain, and Avant Gardner.

Is Miami or New York City better for Music?

Live music enthusiatsts will find something to enjoy in either Miami or New York City.

Is Miami or New York City better for Shopping?

Shopping in a popular activity in both New York City and Miami.

Miami is a famous shopping destination with plenty of stores. The city has every high end brand you could want, along with diverse neighborhoods with local finds and unique purchases.

People travel from around the world to go shopping in New York City. The shopping is as diverse as the city itself. Head for Fifth Avenue for high end shopping or check out any of the many street markets for local items.

Is Miami or New York City better for Families?

New York City offers a wider variety of activities for kids than Miami.

New York City is a very family-friendly place to visit. The city has many activities for kids of all ages including world class museums, beautifully designed playgrounds, and theater shows designed just for young ones.

Miami is not always a place people visit with their families. Because it's so big, you'll find some kid-friendly options in the area. There are kid-friendly museums and activities around the city.


Is Miami or New York City better for Couples?

Both Miami and New York City are good destinations to visit as a couple.

Couples visit Miami frequently as it offers plenty of romantic activities. For couples who love nightlife, wining and dining, and high end beach clubs, this is the place to be.

New York City makes for a fun place to visit for a couple. From a beautiful carriage ride through Central Park, to a romantic river cruise at night, there is an endless list of unique activities that couples can enjoy in the city.

Is Miami or New York City better for Backpackers and Budget Travelers?

Miami and New York City are comparable places to visit for backpackers and budget travelers.

Miami is popular with backpackers and budget travelers. This city is large enough to have something for everyone, so you'll find several hostels in the area that bring in the backpackers.

Many backpackers visit New York City. It isn't a particularly budget friendly destination, but it does get its share of backpackers, so you'll find a nice list of hostels and affordable hangouts that are perfect for the backpacker crowd.

Is Miami or New York City better for Students?

Students come from all over the world to visit New York City. The city has a diverse population, and international students will feel right at home here exploring the city. There are also plenty of major universities including NYU, Columbia University, and Cornell University.

Plenty of students visit Miami. Spring break in Miami is the stuff of legends.

Is Miami or New York City better for Public Transit?

Public transit in New York City is top-notch. The city has one of the largest subway systems in the world. There's also an elaborate bus system, ferry system, and yellow taxis all around town.

Miami has some public transit options. There's an elevated metrorail as well as buses around the city.


Is Miami or New York City a more walkable city?

Miami and New York City both are comparable when exploring on foot.

Miami is very walkable. Many parts of city are surprisingly walkable and pedestrian friendly, allowing you to eat out, go shopping, or explore without the need for a car.

It's very easy to get around on foot in New York City. The majority of the neighborhoods in Manhattan are very walkable and easy to explore on foot. Most people prefer not to drive here as it can be overwhelming and chaotic.

Should I spend more time in New York City or Miami?

How long in Miami or New York City?

One day in Miami or New York City?

Miami is a bustling city that offers something for everyone. It's also a relaxing resort destination. Your budget might influence how long you stay. Since there is so much to do in the area, one day is probably not enough for all of it.

In New York City, many people enjoy the nightlife and live music that this cosmopolitan big city offers. This city offers a variety of activities to choose from. Since there is so much to do in the area, one day is probably not enough for all of it.

A weekend in Miami or New York City?

It's hard to know how much time to spend in Miami. People enjoy relaxing at one of the resorts. It has many unique tourist attractions and fascinating things to do. A weekend is usually not enough time for a trip here as there is plenty to do.

It's hard to know how much time to spend in New York City. A weekend is usually not enough time for a trip here as there is plenty to do. The length of your ideal trip is an individual decision.

Travelers enjoy the nightlife and live music when visiting the glamorous big city of Miami. Travelers enjoy the resorts in the area as well. This beach city offers a variety of activities to choose from. Five days is usually plenty of time to spend here with extra days to spare. With this much time, visitors often visit nearby destinations or take day trips.

New York City is a fun place to experience. This would be the perfect place to spend five days, as it has just the right amount of activities.


A week in Miami or New York City?

You'll find live music and food around the beach city of Miami. People often spend their time relaxing at one of the resorts. One week is more than enough time to enjoy everything. Take some day trips to nearby places to fill the extra days. The length of your ideal trip is an individual decision.

In New York City, many people enjoy the shopping and museums that this one-of-a-kind big city offers. Plenty of people spend one week here when traveling. Take your pick from the many activities offered around the area. One week is often enough time to spend here.

Which city is cheaper, New York City or Miami?

The average daily cost (per person) in Miami is $165, while the average daily cost in New York City is $238. These costs include accommodation (assuming double occupancy, so the traveler is sharing the room), food, transportation, and entertainment. While every person is different, these costs are an average of past travelers in each city. What follows is a categorical breakdown of travel costs for Miami and New York City in more detail.

Is it cheaper to fly into Miami or New York City?

Prices for flights to both New York City and Miami change regularly based on dates and travel demand. We suggest you find the best prices for your next trip on Kayak, because you can compare the cost of flights across multiple airlines for your prefered dates.

When we compare the travel costs of actual travelers between Miami and New York City, we can see that New York City is more expensive. And not only is Miami much less expensive, but it is actually a significantly cheaper destination. So, traveling to Miami would let you spend less money overall. Or, you could decide to spend more money in Miami and be able to afford a more luxurious travel style by staying in nicer hotels, eating at more expensive restaurants, taking tours, and experiencing more activities. The same level of travel in New York City would naturally cost you much more money, so you would probably want to keep your budget a little tighter in New York City than you might in Miami. 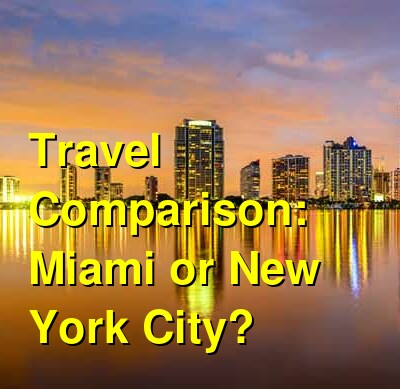