The 5 Towns of Cinque Terre

The 5 Towns of Cinque Terre

Cinque Terre, the "five lands" is one of the most beautiful and popular tourist destinations in Italy. The towns are perched on the cliffs overlooking the Ligurian Sea and are connected by hiking trails that weave through the vineyards and coastline. The towns are designated as a UNESCO World Heritage Site and each village offers its own style and personality.

The most modern and developed of the five towns, Monterosso is actually divided into two areas that are split by a short tunnel road. One side of the town is New Monterosso and the other Old Monterosso. New Monterosso is the most touristy of the villages, boasting a large sandy (or pebbly) beach with all of the amenities and beach-side restaurants and cafes. There are also plenty of upscale hotels and modern apartments (hotel prices here), plus a statue at the end of the beach that cannot be missed. Like the colossal Atlas who holds the world on his back, this statue holds up one of the village's terraces. The old part of town is similar to the other villages of Cinque Terre - quaint and historic, though larger and less steep with a number of boutiques and other shops. Monterosso can be easily explored on foot with links to the other village by train or hiking trails.

Vernazza is the next of the Cinque Terre villages below Monterosso (heading south). It is considered the most picturesque of the five villages with an impressive seaside church and ancient castle overlooking a lovely little harbor below. The rustic church near the waterfront is worth a look. For one of the best views in town take the short walk up to the top of the castle. The main street from the train station to the harbor is beautifully cobbled and lined with colorful buildings that house small shops, cafes, and residences. This street branches off into a maze of smaller alleys that should absolutely be explored on foot. Other features of Vernazza include two clock towers, a small beach with a roped area for swimming (rent boats, too), a public area with tables and umbrellas, as well as a lively night life scene. (Hotel prices here.) Prevo, a hamlet of Vernazza, is another great spot to hike to, offering incredible views from the highest part of the Sentiero Azzurro at 208 meters above sea level. 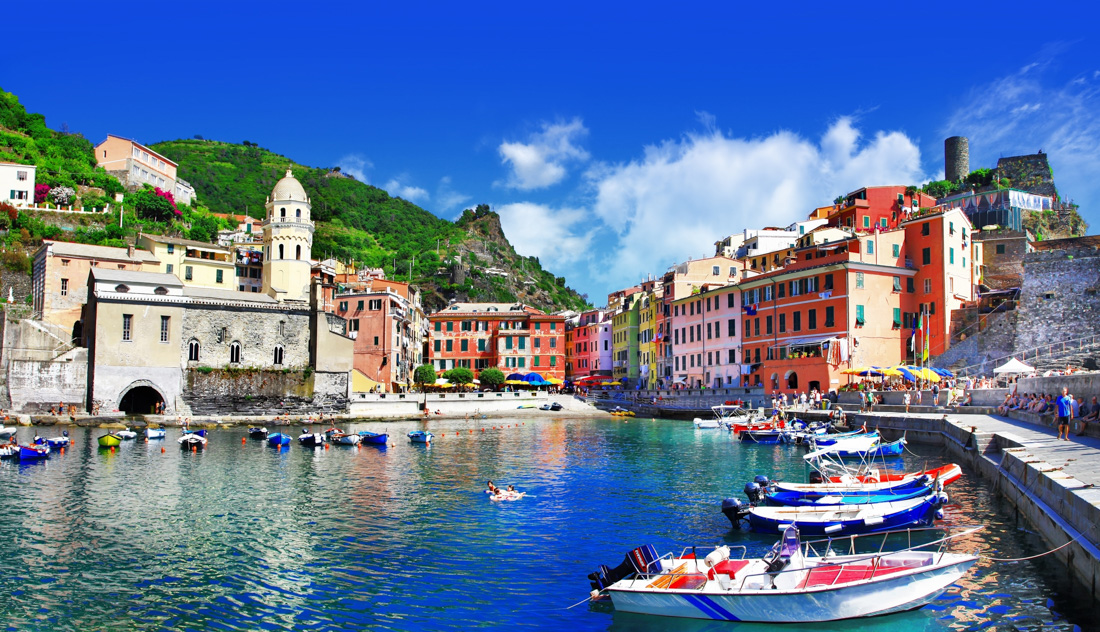 The third and highest of the five villages, Corniglia is placed atop a steep promontory with a small stone beach on either side down below. From the train station, a path rises steeply to reach the town at 300 feet above the Ligurian Sea. It is the only one of the towns not near the sea, its height making it feel smaller and quieter than the others. The climb to reach it goes up 365 steps and is very fragrant, especially in spring when the lemon and olive trees, grapevines, lilies, and other vegetation are all in full bloom. Along the trail are many places to stop with picturesque views of the neighboring village of Manarola. Once at the top, a small street called Via Fieschi winds through town, lined with a number of bars, cafes, and shops selling local products. S. Pietro church is one of Corniglia's most important sights dating back to the early 1500's, with architecture conserving parts from an earlier 11th Century church. Continue along a path past the church for some of the best views of Manarola. 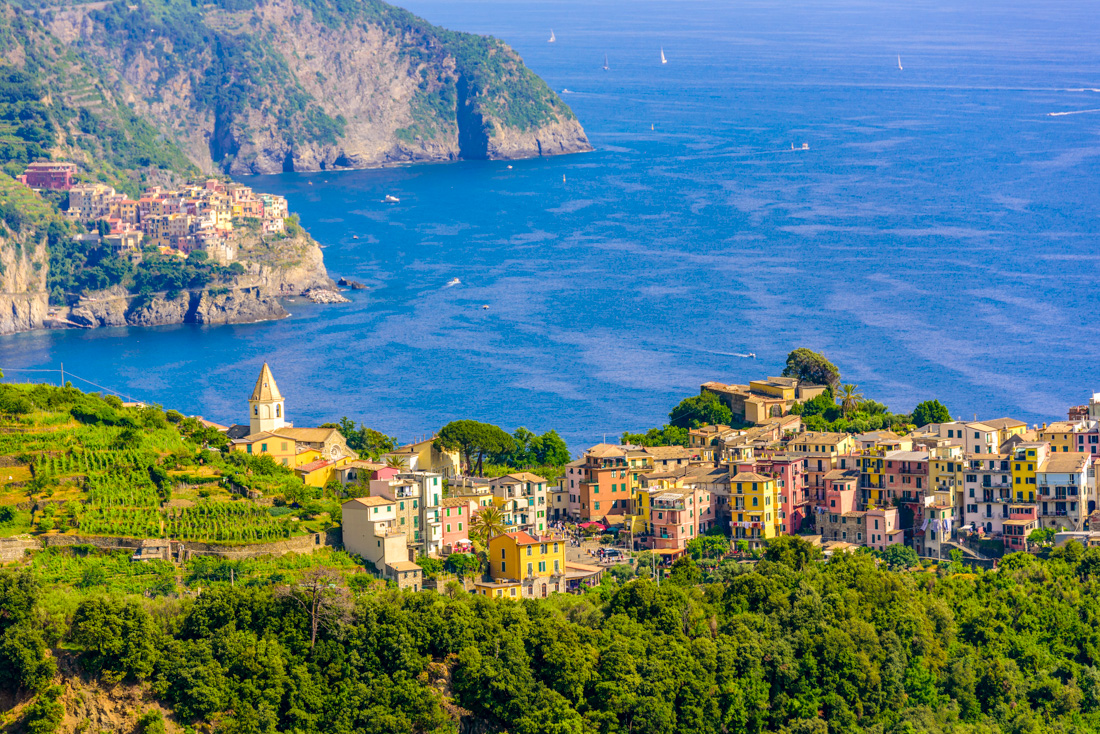 One of the more colorful towns, Manarola boasts a village of buildings painted with the bright colors of a sunset. Leading down to turquoise seas, the lower part of town is filled with boats of all kinds. To reach the town from the train station, you must pass through an underground tunnel, which was once a safe haven for villagers during World War II. As you walk through the tunnel and out up the hill into town you will pass a gallery selling oil paintings and watercolors of the villages, an old waterwheel as the road used to be a stream, and finally the church of S. Lorenzo at the top. Other features include a vineyard walk, the Manarola Cemetery, the harbor, town center, and a web of alleys and hiking paths to explore. There are also a number of coastline caves and secluded swimming holes nearby. 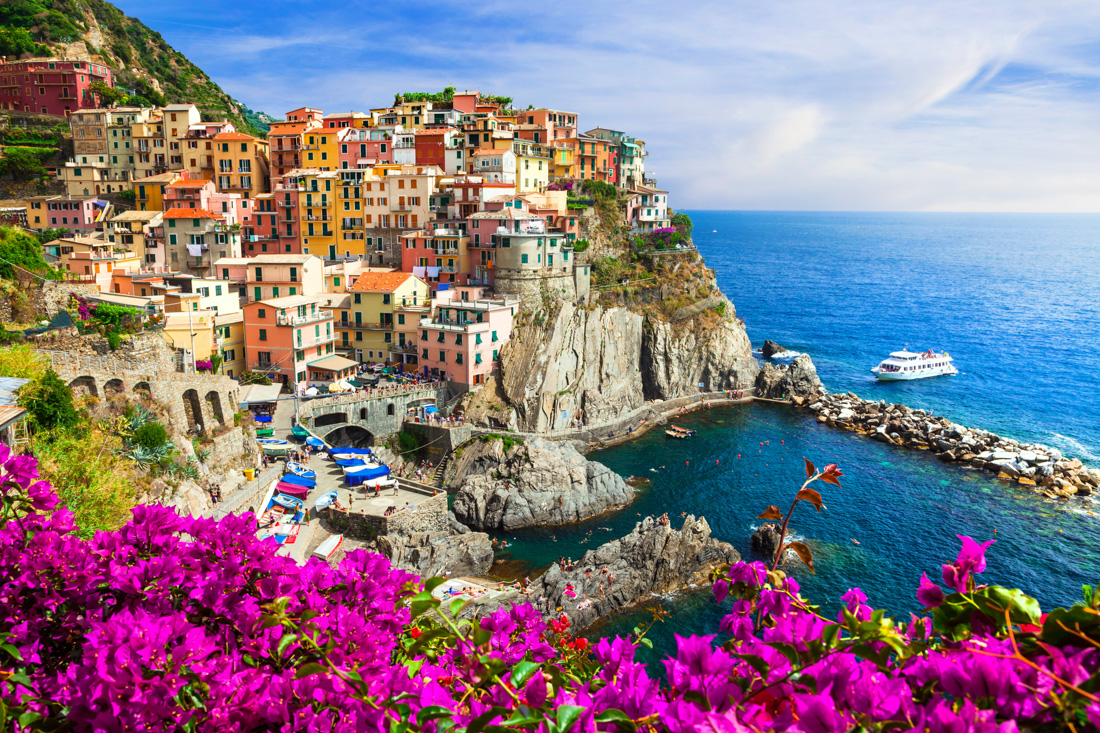 Riomaggiore marks the southernmost village of the five towns. The main street that runs through town is called Via Colombo and it is lined with most of the main amenities, restaurants, bars, cafes, gelato shops, and guest houses. There are also a number of shops selling fresh local goods like fruits, an assortment of salami, cheeses, and olives. Walk towards the sea and the street will take you to Riomaggiore's marina, offering gorgeous views of the water below. The town is also home to an ancient stone castello that dates back to the mid-500s. While it was originally built to protect citizens from any seaborne attacks, much of the original structure was destroyed and its remaining structure now serves as a monument of the National Park of Cinque Terre. (Hotel prices here.) 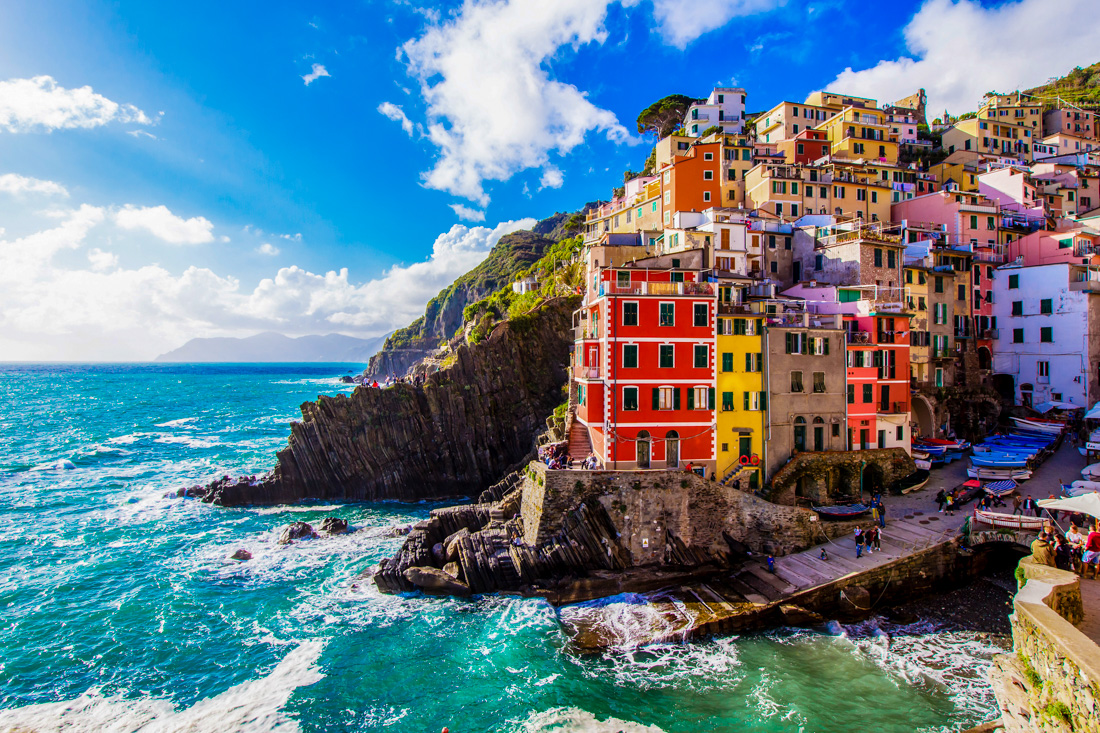 Cinque Terre: The Ultimate Travel GuideThings to Do in Cinque TerreA Hiking Guide to Cinque Terre: When to Go, Required Passes, and the Best Hiking Trails Getting Around Cinque Terre by Ferry Boat, Express Train, or on FootThe Best Day Trips From Cinque Terre: Portofino, Genoa, and Pisa 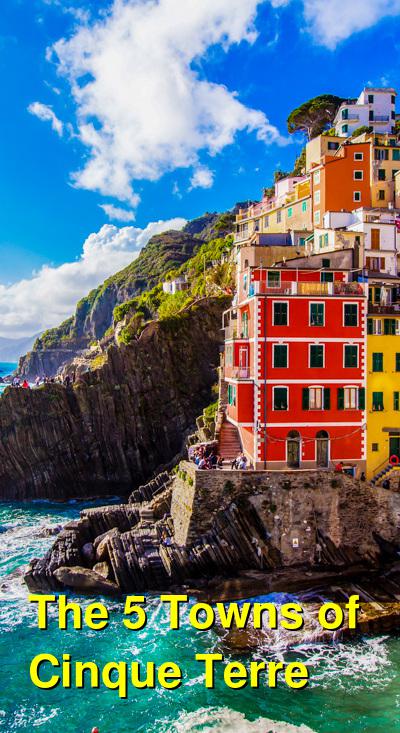