How much does it cost to travel to Ensenada?

How much money will you need for your trip to Ensenada? You should plan to spend around M$1,312 ($69) per day on your vacation in Ensenada, which is the average daily price based on the expenses of other visitors. Past travelers have spent, on average, M$517 ($27) on meals for one day and M$274 ($14) on local transportation. Also, the average hotel price in Ensenada for a couple is M$1,243 ($65). So, a trip to Ensenada for two people for one week costs on average M$18,362 ($960). All of these average travel prices have been collected from other travelers to help you plan your own travel budget.

A vacation to Ensenada for one week usually costs around M$9,181 for one person. So, a trip to Ensenada for two people costs around M$18,362 for one week. A trip for two weeks for two people costs M$36,724 in Ensenada. If you're traveling as a family of three or four people, the price person often goes down because kid's tickets are cheaper and hotel rooms can be shared. If you travel slower over a longer period of time then your daily budget will also go down. Two people traveling together for one month in Ensenada can often have a lower daily budget per person than one person traveling alone for one week.


How expensive is Ensenada? How much money do I need for Ensenada?

How much does a trip to Ensenada cost? Is Ensenada expensive? The average Ensenada trip cost is broken down by category here. All of these Ensenada prices are calculated from the budgets of real travelers.

Looking for a hotel in Ensenada? Prices vary by location, date, season, and the level of luxury. See below for options.

How much does it cost to go to Ensenada? Naturally, it depends on the dates. We recommend Kayak because they can find the best deals across all airlines.

The price of renting a car in Ensenada will depends on dates, the type of car, the location, and your age. We recommend Kayak because they can find the best deals across all car rental companies.

Ensenada On a Budget 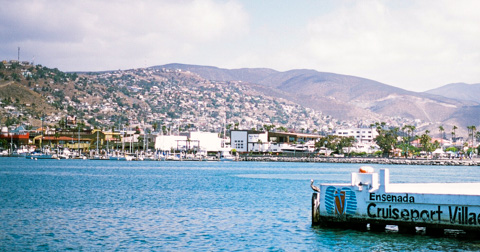 Ensenada, Mexico
Ensenada is on the Pacific Coast of Mexico, south of Tijuana. It's the only deep water port in the state of Baja California and as such, it is an important commerical fishing port as well as a cruise ship destination. The city has a population of almost 500,000 and is located just 78 miles south of San Diego. The city sits between the ocean and a small mountain range. The surrounding area is known for its wine production, which produces some of the best wine in Mexico.

Ensenada has a Mediterranean climate that is mild most of the year and has a short rainy season during the winter months. The coldest months are between November and February when the temperatures average 55 degrees Fahrenheit. The warmest months are between June and September when the temperatures average 70 degrees Fahrenheit.

Ensenada has many beautiful beaches, most of which are located to the north or south of town. There are both private and public beaches and several good surfing spots.

Another fun day trip is La Bufadora, or "blow-hole", which is a small town about twenty miles out of Ensenada. This area offers some wonderful views of the sea, but don't expect to actually see the blow hole. Instead you can see some dramatically rough water that crashes against the sides of the cliff. Also make sure you visit some of the nearby wineries as they offer a glimpse into a unique side of Mexico.

The main tourist street in Ensenada is Avenida Lopez Mateos, which runs parallel to the bay. As a general rule, Calles run parallel to the bay and Avenidas run perpendicular to the bay. The city's downtown area is laid out like a grid. The Malecon is a walkway that runs along the bay between Boulevard Azueta and Avenida Castello for about half a mile. This area has the tourist office, sports fishing piers, Plaza Civica, and the Cruise Ship Terminal.

There are some nice beaches in the surrounding area including Estero Beach and Mona Lisa. Both are private beaches that are connected to resort accommodations. Public beaches in the area include San Miguel and El Punto. Although they are not quite as nice as the private ones, they are free and open to everyone, making them a nice option as well. In the northern parts of the city there are some excellent surfing beaches. These include San Miguel Beach, California Trailer Park, Stacks and 3 M's.

Ensenada has no shortage of water sports and outdoor activities. There are beautiful beaches where you can relax, surf, or swim. It's also possible to go whale watching during the gray whale migration season. Sightseeing tours are common during this time. Sport fishing is also popular in the area. There are day trips where you can fish for Bass, Bonita, Barracuda, Cod, and Yellowtail, and longer trips when you can fish Tuna, Albacore, and Dorado.

Local specialties mostly include seafood dishes, which are usually fresh and excellent. It is said that the fish taco originated in Ensenada. The local version of the fish taco includes deep fried seafood, a white sauce, and shredded cabbage. It is usually served with several salsas. There are several great fish and shrimp taco eateries near the pier, and these are not to be missed.

There are some great restaurants around town but also be sure and check out the Open Air Fish Market. This is Baja's largest seafood market and a great place to sample a fish taco.

There is a bus that travels between Ensenada and Tijunaa. You can also drive to the city and the trip from Tijuana takes about one and a half hours. Cruise ships also frequently visit the port. The port is a ten or fifteen minute walk from the main touristy areas in town.

It's possible to explore most of Ensenada's tourist attractions on foot. There are several areas that are also bike friendly including most of the Boulevard Costero. Driving in town is also surprisingly easy and free parking is readily available in many areas. There are also taxis and buses that can take you to the more suburban areas around town.

By backpackguru in Food
An experience you should have in Ensenada is home cooked, freshly caught fish. If you're staying a place equipped with a kitchen, then you can't pass up the opportunity to buy some freshly caught fish and cook it up yourself. The Mercado de Mariscos is the place to buy fresh fish. The market is lined with stands and stalls selling any thing your heart (or belly) might desire. If you cook it yourself, stick to a simple recipe that lets the true flavors of the fish come through.

If you don't have access to a kitchen, no problem. They'll cook the fish up for you on site. It's not quite the same as "homecooked" but it's delicious none the less (and of course they know what they're doing). You also have the options to buy fish tacos, fried shrimp, or any other seafood delight you might be craving.