How much does it cost to travel to Merida?

How much money will you need for your trip to Merida? You should plan to spend around M$676 ($34) per day on your vacation in Merida, which is the average daily price based on the expenses of other visitors. Past travelers have spent, on average, M$196 ($9.83) on meals for one day and M$49 ($2.44) on local transportation. Also, the average hotel price in Merida for a couple is M$791 ($40). So, a trip to Merida for two people for one week costs on average M$9,467 ($474). All of these average travel prices have been collected from other travelers to help you plan your own travel budget.

A vacation to Merida for one week usually costs around M$4,733 for one person. So, a trip to Merida for two people costs around M$9,467 for one week. A trip for two weeks for two people costs M$18,934 in Merida. If you're traveling as a family of three or four people, the price person often goes down because kid's tickets are cheaper and hotel rooms can be shared. If you travel slower over a longer period of time then your daily budget will also go down. Two people traveling together for one month in Merida can often have a lower daily budget per person than one person traveling alone for one week.


How expensive is Merida? How much money do I need for Merida?

How much does a trip to Merida cost? Is Merida expensive? The average Merida trip cost is broken down by category here. All of these Merida prices are calculated from the budgets of real travelers.

Find a hostel, guesthouse, or B&B in Merida

How much does it cost to go to Merida? Naturally, it depends on the dates. We recommend SkyScanner because they can find the best deals across all airlines.

The price of renting a car in Merida will depends on dates, the type of car, the location, and your age. We recommend SkyScanner because they can find the best deals across all car rental companies.

What did other people spend on Entertainment in Merida?

Typical prices for Entertainment in Merida are listed below. These actual costs are from real travelers and can give you an idea of the prices in Merida, but your costs will vary based on your travel style.

What did other people spend on Water in Merida?

Typical prices for Water in Merida are listed below. These actual costs are from real travelers and can give you an idea of the prices in Merida, but your costs will vary based on your travel style.

Merida On a Budget

Diving in a Cenote in Merida, Mexico
Merida is the largest city on the Yucatan Peninsula, which separates the Gulf of Mexico from the Caribbean Sea. It is also the capital of the state of Yucatan as a whole. There is a population of 750,000 and is very rich in diversity and culture.

This city is over four hundred years old so there are many historical sights around the city. However, there are also nearby beaches, quaint neighborhoods, and shopping centers. The historic center of town is called Plaza Grande and is surrounded by many historic buildings like the Grand Cathedral, the Museo Macay, and the Casa de Montejo. The latter was the palace of Montejo the Conquistador in 1549 and inside you can find sculptures of Spanish Conquistadors. On the west side of the plaza is the Ayuntamiento, which was once the City Hall. Finally, there is the Governor's Palace where you can find murals that depict the history of Merida.

The Palacio Canton houses the regional archaeology museum (the Museo Regional de Arquaeología de Yucatán. This building was one of the grandest mansions in Merida and it has many ancient Mayan artworks that are very interesting to see.

The opera house, Teatro Peón Contreras, is another historic building to check out in Merida. It was designed by an Italian architect in 1908 and today is part of Merida's high culture.

Merida is close to many Mayan ruins and archaeological sites. Dzibilchaltún and Mayapan are close by and are perfect locations for day trips outside Merida. Dzibilchaltún is about an hour from Merida and is known for its famous sculpture, "Temple of the Seven Dolls". There is also a museum that holds ancient Mayan artifacts and a 16th-century ruin of a famous church built by the Spanish.

Mayapan is another nearby Mayan ruin site that is about forty kilometers from Merida. This site was the political capital during the 1200's until the 1400's. Chichen Itza is a much larger ruin site but is located much further away from Merida. If you wish to visit this place, it is best to stay overnight to ensure that you can see everything it has to offer. The main attraction there is the Pyramid of Kukulcan, which was recently voted as one of the new Seven Wonders of the World.

Visit the Mercado Lucas de Galvez and San Benito (an indoor market), which is open every day until 6:00 pm. This market has vendors that sell an entire range of things from food to clothing, to pets.

Carnaval de Merida is a lively activity for those visiting the city sometime between mid-February and early March. This carnival is in the top five for the whole country of Mexico. A fun activity to do at night is head to El Gran Museo del Mundo Maya, where there is a nightly light and sound show at 9:00 pm. The museum also has tons of historical, archaeological, and anthropological displays that portray Mayan culture. This city is a great place to explore the beautiful and historic Yucatán Peninsula.

Most of the food in Merida is in the category of Mayan Cuisine. This type of cuisine usually involves corn, turkey, squash, tomatoes, chiles, pork, cheese, and chocolate. A great place to try traditional Yucatán dishes is at Eladios. There are a couple locations for this restaurant, but many say that the one in Progreso in front of the beach is the best. For the best tacos in town, head to Wayan'e. A less traditional choice is Hennessy's Irish Pub, which is popular among locals, expats, and tourists. Another great place to get food in town is at the Mercado Lucas de Galvez that was mentioned above. There are several options of places to eat within this market for traditional, homemade food as well as great treats for dessert.

There is an international airport in Merida, about eight kilometers outside of the city. This airport has service to other cities in Mexico, and many to and from the states. Once you land at the airport, you can either take a taxi or a bus to the main road in town (Calle 23).

If you are coming to Merida from another part of Mexico, you can take a bus into one of the three bus stations in town (Grupo ADO, Terminal de Autobuses de 2a Clase, Hotel Americana Fiesta). Once in the city, walking is a good option if you do not mind the hot temperatures. However, there are several taxis in town, as well as frequent buses. 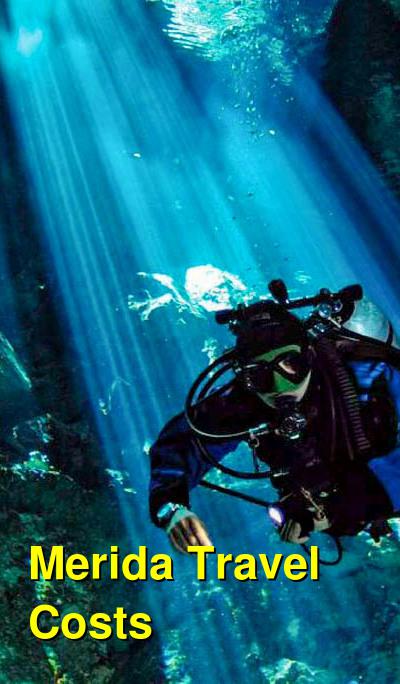