How much does it cost to travel to Isla Mujeres?

How much money will you need for your trip to Isla Mujeres? You should plan to spend around M$1,971 ($99) per day on your vacation in Isla Mujeres, which is the average daily price based on the expenses of other visitors. Past travelers have spent, on average, M$617 ($31) on meals for one day and M$468 ($24) on local transportation. Also, the average hotel price in Isla Mujeres for a couple is M$2,084 ($105). So, a trip to Isla Mujeres for two people for one week costs on average M$27,593 ($1,390). All of these average travel prices have been collected from other travelers to help you plan your own travel budget.

A vacation to Isla Mujeres for one week usually costs around M$13,797 for one person. So, a trip to Isla Mujeres for two people costs around M$27,593 for one week. A trip for two weeks for two people costs M$55,186 in Isla Mujeres. If you're traveling as a family of three or four people, the price person often goes down because kid's tickets are cheaper and hotel rooms can be shared. If you travel slower over a longer period of time then your daily budget will also go down. Two people traveling together for one month in Isla Mujeres can often have a lower daily budget per person than one person traveling alone for one week.

How much do vacation rentals cost in Isla Mujeres? Prices vary by location, date, size of the place, and the level of luxury. See below for options.

How much does it cost to go to Isla Mujeres? Naturally, it depends on the dates. We recommend Kayak because they can find the best deals across all airlines.

The price of renting a car in Isla Mujeres will depends on dates, the type of car, the location, and your age. We recommend Kayak because they can find the best deals across all car rental companies.

Isla Mujeres On a Budget 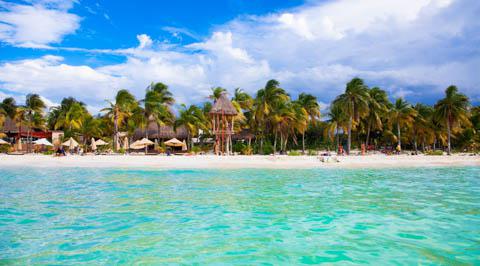 Isla Mujeres, Mexico
About eight miles from the east coast of the Yucatan Peninsula, Isla Mujeres is an island in the Mexican Caribbean Sea. The town, of the same name, has a population of about 13,000. Tourism has grown in the area since the 1970s and today it is a significant part of the island's economy. As such, there are plenty of amenities that cater specifically to visitors. The island's proximity to Cuba make it a common transit point for Cubans in route to the United States.

The island has a tropical climate that is hot and humid throughout the year. The peak tourist season is during the winter months when the temperatures are at their coolest. During the summer, temperatures can climb over 90 degrees Fahrenheit, but if you hope to see whale sharks, then this is the time to visit.

There are some great sights around the island, but some of the most popular are the turtle farm, Hacienda Mundaca, and Punta Sur. The turtle farm is a government sponsored hatchery for endangered sea turtles. It is possible to see young turtles in tanks. Hacienda Mundaca is a 19th century hacienda that was built by the pirate Fermin Mundaca. The area now has walls, arches, gardens, birds, cattle, and an orchard. Punta Sur is the small ruins of an old lighthouse and temple to Ixchel, the goddess of fertility.

Isla Mujeres's main town is compact and fun to walk around. There are restaurants that cater to both locals and tourists.

Two of the islands most popular beaches are Playa Norte and Playa Sol. Playa Norte is the most crowded and it has plenty of restaurants and hotels. It's a beautiful stretch of white sand on the north side of the island with a shallow blue beach. Playa Sol is adjacent to Playa Norte and is the best place to watch the sunset. It also stays slightly less crowded than Playa Norte during the day time.

There is no shortage of activities around the island but some of the most popular and unique are the whale shark tours, deep sea fishing, scuba diving, and the dolphin discovery experience.

Whale shark tours run from mid-May through September, but the peak months are July and August. There are hundreds of whale sharks that gather in the waters around the island. It is best to go through an official operator that is regulated by the government. There are cheaper street vendors, but the quality and safety of the tour can not be confirmed.

Dolphin Discovery is a small amusement park that lets visitors interact and swim with dolphins.

If you want to stay on land, there is beach volleyball and a lovely town which you can explore.

Seafood is plentiful and not to be missed. Much of the food is served with either a Caribbean or Mexican slant. Ceviche is a popular dish, but the island's signature dish is Tik-n-chik. This is a whole fish that is marinated in achiote and then grilled.

The most common way to reach Isla Mujeres is by boat. You can catch a ferry in Cancun at Puerto Juarez, Gran Puerto Cancun, or Playa Tortugas. They cost about seventy pesos for a one way trip. If the weather is poor, the ride may be rough, but generally you make good time. If money is not a concern it is possible to charter a flight to the island as well.

The island has a small, compact main town that is easy to walk around. You can pick up a taxi at the ferry terminal to the downtown area for 30 pesos. The island is about seven kilometers in length and the best way to explore it is to rent a scooter or golf cart. You will have to negotiate the price and assume about $25 a day as a starting price.

Getting Your Scuba Certification

By backpackguru in Entertainment
If you're a frequent traveler, particularly to tropical destinations, then you know the importance of having your scuba certification. If you don't have it already consider getting it while you're on the road. Isla Mujeres is a popular placee for scuba diving, and therefore a good place to consider getting certified. You really have two options. You can do the coursework at home, or you could do it during your travels. If you do it at home, you'll save yourself time while you're on the road. Then you can do your certification dives when you arrive at your destination. If you do end up doing the coursework on the road, it's typically a four day classroom program, but it's less expensive than it would be at home. You really have to weigh your options and priorities. There are at least four dive companies you could go with on the island so look into all your options before you arrive.


Some of the links on this website are sponsored or affiliate links which help to financially support this site. By clicking the link and making a purchase, we may receive a small commission, but this does not affect the price of your purchase.