How much does it cost to travel to Hat Yai?

How much money will you need for your trip to Hat Yai? You should plan to spend around ฿472 ($15) per day on your vacation in Hat Yai, which is the average daily price based on the expenses of other visitors. Past travelers have spent, on average, ฿297 ($9.51) on meals for one day and ฿18 ($0.59) on local transportation. Also, the average hotel price in Hat Yai for a couple is ฿300 ($9.62). So, a trip to Hat Yai for two people for one week costs on average ฿6,612 ($212). All of these average travel prices have been collected from other travelers to help you plan your own travel budget.

A vacation to Hat Yai for one week usually costs around ฿3,306 for one person. So, a trip to Hat Yai for two people costs around ฿6,612 for one week. A trip for two weeks for two people costs ฿13,224 in Hat Yai. If you're traveling as a family of three or four people, the price person often goes down because kid's tickets are cheaper and hotel rooms can be shared. If you travel slower over a longer period of time then your daily budget will also go down. Two people traveling together for one month in Hat Yai can often have a lower daily budget per person than one person traveling alone for one week.


How expensive is Hat Yai? How much money do I need for Hat Yai?

How much does a trip to Hat Yai cost? Is Hat Yai expensive? The average Hat Yai trip cost is broken down by category here. All of these Hat Yai prices are calculated from the budgets of real travelers.

How much do vacation rentals cost in Hat Yai? Prices vary by location, date, size of the place, and the level of luxury. See below for options.

What did other people spend on Food in Hat Yai?

Typical prices for Food in Hat Yai are listed below. These actual costs are from real travelers and can give you an idea of the prices in Hat Yai, but your costs will vary based on your travel style.

How much does it cost to go to Hat Yai? Naturally, it depends on the dates. We recommend SkyScanner because they can find the best deals across all airlines.

The price of renting a car in Hat Yai will depends on dates, the type of car, the location, and your age. We recommend SkyScanner because they can find the best deals across all car rental companies.

What did other people spend on Alcohol in Hat Yai?

Typical prices for Alcohol in Hat Yai are listed below. These actual costs are from real travelers and can give you an idea of the prices in Hat Yai, but your costs will vary based on your travel style.

What did other people spend on Water in Hat Yai?

Typical prices for Water in Hat Yai are listed below. These actual costs are from real travelers and can give you an idea of the prices in Hat Yai, but your costs will vary based on your travel style.

Hat Yai On a Budget

Hat Yai, Thailand
The fourth largest city of Thailand, Hat Yai is a popular tourist destination, especially on weekends and holidays for people in neighboring Malaysia and Singapore. It is best known as a commercial hub and shopping destination, and for its floating market and Buddhist temple.

While most people visit Hat Yai to immerse themselves in the shopping, there are several sights worth seeing. On the northern outskirts of the city, Hat Yai Municipal Park has a number of attractions. A cable car runs to the top of a hill where the golden Phra Buddha Mongkol Maharaj statue is located and the Bodhisattva Kuan Im (Guan Yin) Temple. The park is also home to the Hat Yai Observatory, which allows visitors to explore science and astronomy.

As far as statues go, the most famous is probably the reclining Buddha (Phra Phuttha Hattha Mongkhon) at Wat Hat Yai Nai. Measuring about 35 meters long, 15 meters tall, and 10 meters wide, it is thought to be the third largest reclining Buddha in the world and is well-regarded by locals and tourists alike. It is located near the Khlong U Taphao Bridge.

For those interested in escaping the city for a day, travel about 29 kilometers southwest out to Ton Nga Chang Wildlife Sanctuary. Here visitors come to admire the Ton Nga Chang Waterfall, which has seven levels of flowing waters. The third level is the most beautiful, separating into two streams. The general area is popular for swimming and recreation.

Due to its shopping reputation, the downtown of Hat Yai is mostly developed into shopping and entertainment venues. For a more unique experience different from typical shopping malls and department stores, head to the Klong Hae floating market and do some shopping there. Hat Yai has additional markets sprinkled throughout its streets, some of which really come to life at night with lights and colors. No matter where you turn, if you are wandering the streets of central Hat Yai, there will be plenty to see, do, eat, and experience at every corner.

Hat Yai is also host to a few seasonal events and festivals. The Hat Yai Ice Dome, for example, near Hat Yai Park is a venue for a display of ice sculptures by sculptors from Harbin, China. Another annual event in the park is Hat Yai Lantern, held alongside the park's lake at the beginning of each year. Because of the city's large Thai Chinese population, the Chinese New Year is also well-celebrated, especially in the city center. Other significant festivals include the Songkran Festival held in April in honor of the Thai New Year, as well as Loi Krathong held in November when people pay their respects to the goddess of water with beautiful floating candles and lanterns.

Being a large city, Hat Yai is host to a large amount of different food options. While there are international chains offering Japanese and Western food for the less adventurous palette, Thai street food is abundant and a must for experiencing the local flavors. Here are some of the favorites:

Pad See Ew: warm and comforting dish of wide flat noodles stir-fried in a dark soy-sauce with chicken, pork, or beef, and some vegetables.

These are just a few examples of the many tasty Thai dishes to try in Hat Yai.

The main point of entry by plane is Hat Yai International Airport, located about 25 minutes southeast of central Hat Yai by car. From the airport, travelers can take a taxi, limo, van, car rental, or a songthaew, which is the cheapest option. Songthaew are basically pickup trucks that have been converted with benches for passengers and are operated as local buses and sometimes taxis.

Hat Yai is also connected by train to several locations including Bangkok, Sungai Kolok, Surat Thani, and Malaysia. Additionally long distance buses are available to and from major cities in the area. 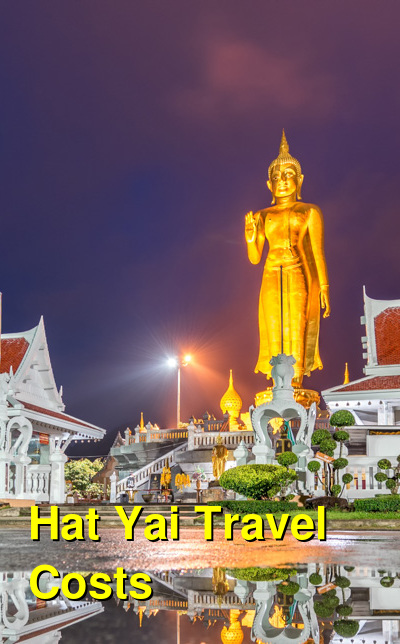