How much does it cost to travel to Koh Samui?

How much money will you need for your trip to Koh Samui? You should plan to spend around ฿1,614 ($52) per day on your vacation in Koh Samui, which is the average daily price based on the expenses of other visitors. Past travelers have spent, on average, ฿570 ($18) on meals for one day and ฿489 ($16) on local transportation. Also, the average hotel price in Koh Samui for a couple is ฿1,386 ($45). So, a trip to Koh Samui for two people for one week costs on average ฿22,602 ($727). All of these average travel prices have been collected from other travelers to help you plan your own travel budget.

A vacation to Koh Samui for one week usually costs around ฿11,301 for one person. So, a trip to Koh Samui for two people costs around ฿22,602 for one week. A trip for two weeks for two people costs ฿45,203 in Koh Samui. If you're traveling as a family of three or four people, the price person often goes down because kid's tickets are cheaper and hotel rooms can be shared. If you travel slower over a longer period of time then your daily budget will also go down. Two people traveling together for one month in Koh Samui can often have a lower daily budget per person than one person traveling alone for one week.


How expensive is Koh Samui? How much money do I need for Koh Samui?

How much does a trip to Koh Samui cost? Is Koh Samui expensive? The average Koh Samui trip cost is broken down by category here. All of these Koh Samui prices are calculated from the budgets of real travelers.

How much do vacation rentals cost in Koh Samui? Prices vary by location, date, size of the place, and the level of luxury. See below for options.

What did other people spend on Food in Koh Samui?

Typical prices for Food in Koh Samui are listed below. These actual costs are from real travelers and can give you an idea of the prices in Koh Samui, but your costs will vary based on your travel style.

How much does it cost to go to Koh Samui? Naturally, it depends on the dates. We recommend SkyScanner because they can find the best deals across all airlines.

The price of renting a car in Koh Samui will depends on dates, the type of car, the location, and your age. We recommend SkyScanner because they can find the best deals across all car rental companies.

What did other people spend on Transportation in Koh Samui?

Typical prices for Transportation in Koh Samui are listed below. These actual costs are from real travelers and can give you an idea of the prices in Koh Samui, but your costs will vary based on your travel style.

Koh Samui On a Budget

Longtail Boats
The largest island on the east coast of southern Thailand, Ko Samui (or Koh Samui) sees a good number of visitors every year who come for its lush rainforest, beautiful shores, and undersea wildlife. The size of the island is still small enough to allow visitors to circumnavigate it with a taxi or motorbike in a day, while hikers and outdoor enthusiasts can find plenty of inland activities in the hills and jungle.

The beaches are the primary source of entertainment on Koh Samui, as the water is clear and the sand is terrific. Various beaches can be found on the island, some crowded and some remote. Chaweng and Lamai are the most popular and crowded, catering towards younger backpackers. Nearby restaurants and shops offer food and services to the multitudes of foreign travelers. If you're looking for something quieter, look for Mae Nam or Choengman beaches on the north side.

A number of small temples (wats) and other religious structures can be found around the island, but many opt to do their historical and cultural tours in Bangkok or elsewhere in the country.

The island is also home to an aquarium, a tiger zoo, and a butterfly and insect museum. Monkey shows and an elephant camp are also located in the Bophut Beach area.

Although the main pier for ferries is on the west side of the island at Nathon beach, the main town is at the northeastern part of the island on a rough peninsula.

Just south of the main town, on the eastern shore is Chaweng Beach, the busiest and most crowded. South of Chaweng is Lamai, the next busiest beach area(the towns somewhat merge together). This section of the island is very developed and contains western restaurants such as pizza and Irish pubs to cater to tourists and partygoers. Expect a crowd.

Choeng Mon Beach is at the end of the northeastern peninsula, and also has easy access to hotels and shops.

Along the northern shore, leading west and away from the town, are Bophut Beach, Mae Nam beach (known to be quieter), and other stretches of developed shoreline at the base of various hills.

Nathon and Lipa Noi beaches cover the main part of the eastern side, and these stretches are also quite developed, but not as crowded as in the east. The southwestern corner and southern beaches are also developed and relatively quiet, with various resorts and amenities.

The interior of the island, although containing some roads, is mostly undeveloped. Most of the interior is parkland, although a few hotels and resorts can be found for those looking for a quiet retreat in the jungle with a view.

Scuba diving and other water sports such as snorkeling and boat trips are very popular due to the high number of smaller islands and reefs surrounding Koh Samui. Diving in nearby Ang Thong National Marine Sanctuary, although often crowded, is considered world class due to the clear, warm waters. Diving or snorkeling just off of Koh Samui is not a good due to murky waters. Dive shops and dive tour companies can be found around many of the touristy areas near beaches or in town.

Snorkeling and boat tours (for drinking, partying, or dining) are also common. Hostels and tour companies around town offer hiking and other outdoor trips into the hills and jungle as well.

Note that many restaurants use a dual-pricing system for locals and foreigners, so don't be surprised if your bill is higher than expected.

Food options from all over the world are available, for better or worse, to cater to the needs of tourists. It can be challenging to find truly authentic Thai cuisine on the island. Seafood is quite popular for obvious reasons.

Visitors can arrive via the airport or by public ferry, most of which dock at Nathon pier.

Taxicabs are available almost everywhere on the island and frequent the main towns. Upon arrival at Nathon pier, drivers looking for passengers often hound visitors just off of the ferry boats. These drivers will often display fake "standard prices" signs. Ignore these and negotiate fiercely.

Public buses come in the form of songthaews, which are covered pick-up trucks. They are much cheaper than taxis and act as either buses or shared taxis. If you simply hop on and then press the buzzer when you want to get off, the rate is fairly cheap, depending on your distance traveled. Note that on many of these, foreigner prices are much higher than the locals if you wish to attempt a negotiation.

Motorbikes are available for rent, but use common sense, obey the rules of the road, and drive safely. Many mortorbike rental companies will want you to leave your passport, which is generally not recommended. If you run into a problem, you're very stuck.

Bicycles are also available for rent, and are a good way to either get around the towns or explore a little further afield.

Cars can be rented to explore the island as well, and international companies such as Budget and Avis are around for those looking for a reputable company. 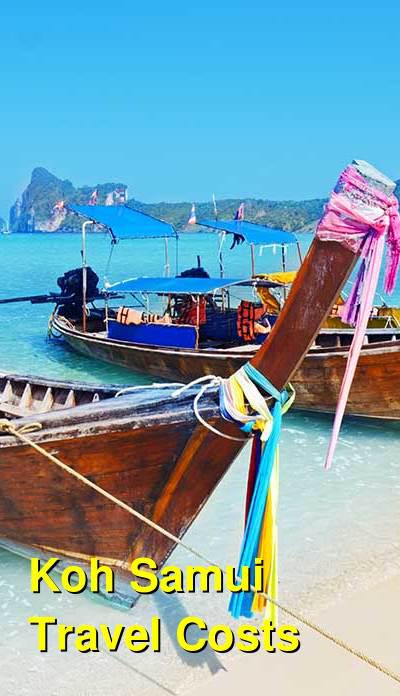