How much does it cost to travel to Tasmania?

How much money will you need for your trip to Tasmania? You should plan to spend around AU$165 ($113) per day on your vacation in Tasmania, which is the average daily price based on the expenses of other visitors. Past travelers have spent, on average, AU$35 ($24) on meals for one day and AU$34 ($24) on local transportation. Also, the average hotel price in Tasmania for a couple is AU$187 ($129). So, a trip to Tasmania for two people for one week costs on average AU$2,308 ($1,588). All of these average travel prices have been collected from other travelers to help you plan your own travel budget.

A vacation to Tasmania for one week usually costs around AU$1,154 for one person. So, a trip to Tasmania for two people costs around AU$2,308 for one week. A trip for two weeks for two people costs AU$4,615 in Tasmania. If you're traveling as a family of three or four people, the price person often goes down because kid's tickets are cheaper and hotel rooms can be shared. If you travel slower over a longer period of time then your daily budget will also go down. Two people traveling together for one month in Tasmania can often have a lower daily budget per person than one person traveling alone for one week.


How expensive is Tasmania? How much money do I need for Tasmania?

How much does a trip to Tasmania cost? Is Tasmania expensive? The average Tasmania trip cost is broken down by category here. All of these Tasmania prices are calculated from the budgets of real travelers.

Looking for a hotel in Tasmania? Prices vary by location, date, season, and the level of luxury. See below for options.

How much does it cost to go to Tasmania? Naturally, it depends on the dates. We recommend Kayak because they can find the best deals across all airlines.

The price of renting a car in Tasmania will depends on dates, the type of car, the location, and your age. We recommend Kayak because they can find the best deals across all car rental companies.

Tasmania On a Budget 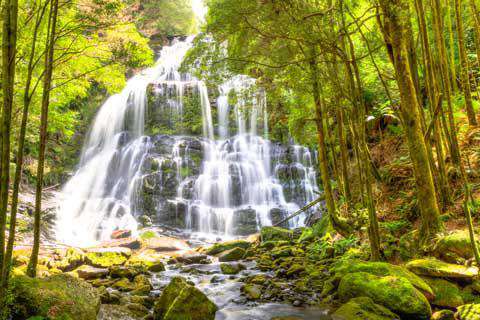 Nelson Falls, Franklin-Gordon Wild Rivers National Park, Tasmania, Australia
Who doesn't want to escape to a remote part of the world for some rest and relaxation? For those kinds of vacations, don't count out the island of Tasmania. This destination should be at the top of every nature lover's list. Over 45% of this island is national park land.

Tasmania is Australia's only island state. With approximately 500,000 people, it is the also the smallest state in the country. It's roughly the size of the state of West Virginia with much of its population living on the south and north coasts. The island sees all the seasons and a relatively cool climate. Keep in mind, however, the seasons are different down under. Their summer runs from December to February while their winter spans over June to August.

Since most of this island is comprised of protected national parks, you'll probably stumble on to one of these without even looking. Whether you find yourself on the red rocks of Bay of Fires, in the caves of Mole Creek Karst, or walking the cliffs of The Gorge, keep your eyes out for the abundance of wildlife that calls Tasmania home - kangaroos, wallabies, wombats, ringtail possums, platypuses and, of course, the Tasmanian Devil.

If you didn't get enough cave diving in Australia's Mole Creek Karst National Park, take a trip to Hasting Caves. As the largest tourism cave in Australia, Hastings Caves will blow you away with stunning chambers of flowstones and shawls. After exploring stalactites and stalagmites all day, deep your in feet in the thermal pool.

For a bit of history, add in a stop at Port Arthur. This is the best preserved convict site in the whole of Australia. Guided tours will show you all over this colonial site including the Commandment's House, ruins of the penitentiary, the guard tower and the asylum.

For a perfect stroll after a long day of touring, head to Sullivan's Cove for an evening in Salamanca Place. Lined with a long row of sandstone buildings, you can easily lose yourself under the stone arches and in shops full of crafts, jewelry and books. If you happen to be there on a Saturday, be sure to hit the Salamanca Market to find handmade crafts from local artisans.

The island is split into seven different regions. The most popular region is Southern Tasmania as it's home to the state capital of Hobart. Northern Tasmania contains the mountainous regions of the northeast, while the North West Coast features small townships and cities. The East Coast is where you'll cozy up on the stunning beaches of this island including the Bay of Fires and Wine Glass Bay. The West Coast is the least populated area of the island and is the center of Tasmania's mining industry. The South West region is a national park, and the Bass Strait Islands are two scenic islands sitting between Tasmania and mainland Australia.

Tasmania is an outdoor lover's paradise. There are so many trails for hiking, biking, and off road touring. Tasmania is home to many hiking trails, some long and some short. If you're interested in hiking, check out this great guide to the best hikes in Tasmania. Also, one of the most popular treks is the Overland Track, which is a 5 (or more) day hike through some of Tasmania's most beautiful wilderness areas. If you're planning to do this, here's everything you need to know about the Overland Track hike.

If the water is more your style, though, there are plenty of scuba diving sites. Places like Bichero, Bay of Fires, and Flinders Island have giant kelp forests and shipwrecks just waiting to be explored.

If you'd rather stay above water, there are beautiful kayaking spots full of secret coves and beautiful coastlines to glide around.

Between diving, fishing, hiking and biking, there's no end to the adventures you'll have in Tasmania.

As Tasmania has grown into an international destination, so has the foodie scene. There is a wide variety of cuisine to choose from, but be sure you try some of the specific dishes they're known for. If you see seafood, wallaby, leatherwood honey or homemade fudge on the menu, order it right away.

The easiest and most convenient way to get around Tasmania is by car. Keep in mind many of the coastal roads can be a bit winding and difficult. The roads in this state use an alphanumeric system for their roads. In general, these roads are clearly marked, so navigating Tasmania isn't too tough.

If you're not comfortable driving in a foreign land, buses are an option. Just be sure you have plenty of time, as the buses are often not on schedule. Keep in mind there are no passenger trains on the island.