How much does it cost to travel to New South Wales?

Looking for a hotel in New South Wales? Prices vary by location, date, season, and the level of luxury. See below for options.

How much does it cost to go to New South Wales? Naturally, it depends on the dates. We recommend Kayak because they can find the best deals across all airlines.

The price of renting a car in New South Wales will depends on dates, the type of car, the location, and your age. We recommend Kayak because they can find the best deals across all car rental companies.

New South Wales On a Budget 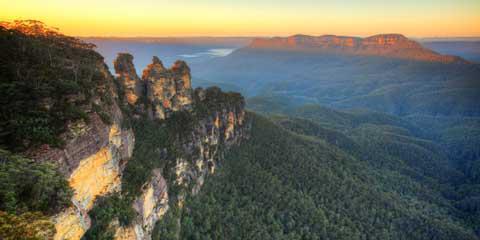 Three Sisters Lookout, Echo Point Katoomba, Blue Mountains
In the south of Australia is a place full of every and any tourist activity you can dream of. With Sydney under its belt, New South Wales is the center of Australian culture and tourism.

Just south of Queensland and north of Victoria, the state of New South Wales is home to approximately 6.7 million people. It is easily the continent's most populous state. This region is the core of the British colonialism of 1788. Its capital, Sydney, is the oldest and largest city in the state. Today, it is home to shopping, art, entertainment, history, beaches, and plenty of adventures.

When planning a trip to the land down under, remember that their seasons are just opposite of ours. So if you want to go for Christmas, throw that bathing suit in your bag.

Who doesn't dream of seeing the gorgeous Sydney Harbour, by day or night? This picture-perfect view is visible from the side of a ferry or from one of the islands in the center of the harbor. Take a stroll through Sydney for some of the most beautiful local art and interesting coffee shops. With the culture and history of this city, no time is wasted wandering Sydney.

There are also countless natural sights to see in the whole of New South Wales. From the Blue Mountains to the vineyards of Hunter Region, the Jenolan Caves and Port Stephens, nature was kind to this region.

New South Wales is divided into several regions. Of course, the most popular is the region of Sydney. This includes the capital city and its suburban surroundings. Smaller regions just outside of Sydney include the Blue Mountains with stunning scenery and wilderness, the Central Coast with awesome waterways and beaches, Hunter Valley, Illawarra, Shoalhaven, and the Southern Highlands.

As you travel further inland, you will see some of the wider regions the state has to offer. There is the Central West full of rolling plains and the wine region of Mudgee. The Far West includes mining towns while the Mid-North Coast is widely publicized as the "holiday coast." In New South Wales' New England region you will find four world heritage parks and the country music capital of the country. The Northern Rivers region includes five world heritage parks and the cities of Lismore and Grafton. Riverina's region is home to small communities, great food and superb wine. The Snowy Mountains are a region of mountains along the Victorian border, and the South Coast has kilometers of beaches, coves and bays ready to explore.

You better have a lot of time if you want to tackle every adventure available in New South Wales. You can go on the bushwalks in the Jamison Valley, surf up and down the north coast, or ski the Snowy Mountains in the winter.

There are plenty of mountains to climb, but if you want the excitement of climbing but the views of the cityscape, climb the Sydney Harbour Bridge. From that point you can watch the sunset over the city.

For the greatest international cuisine and gourmet food, stay in Sydney. They are currently seeing an upswing in fusion restaurants, so go try some new tastes you never imagined. Cuisine from all over the world can be found in this dynamic city, including Asian and European recipes. Also, here's where to find the best vegan and vegetarian restaurants in Sydney.

That's not to say the other regions in New South Wales don't have tasty dishes to offer. Seafood lovers will delight in the offerings of Mid-North Coast, Northern Rivers, Central Coast and the South Coast.

Some of the best wine in the world comes from Australia - especially in Hunter Valley. Just a few hours north of Sydney are enough winery tours for every couple and bachelorette party.

If you plan on spending your whole trip in Sydney, transportation will not be difficult. Because 60% of the state's population lives in this region, adequate public transit is available to all. However, if you're leaving Sydney, things get a bit trickier. There is essentially no public system outside of Sydney.

There is a train system taking passengers in and out of the city, but generally if you are a confident driver and comfortable on foreign roads, driving yourself will be the most convenient and efficient way to get around New South Wales.