How much does it cost to travel to Canberra?

How much money will you need for your trip to Canberra? You should plan to spend around AU$164 ($116) per day on your vacation in Canberra, which is the average daily price based on the expenses of other visitors. Past travelers have spent, on average, AU$43 ($30) on meals for one day and AU$30 ($21) on local transportation. Also, the average hotel price in Canberra for a couple is AU$202 ($143). So, a trip to Canberra for two people for one week costs on average AU$2,293 ($1,620). All of these average travel prices have been collected from other travelers to help you plan your own travel budget.

A vacation to Canberra for one week usually costs around AU$1,146 for one person. So, a trip to Canberra for two people costs around AU$2,293 for one week. A trip for two weeks for two people costs AU$4,586 in Canberra. If you're traveling as a family of three or four people, the price person often goes down because kid's tickets are cheaper and hotel rooms can be shared. If you travel slower over a longer period of time then your daily budget will also go down. Two people traveling together for one month in Canberra can often have a lower daily budget per person than one person traveling alone for one week.


How expensive is Canberra? How much money do I need for Canberra?

How much does a trip to Canberra cost? Is Canberra expensive? The average Canberra trip cost is broken down by category here. All of these Canberra prices are calculated from the budgets of real travelers.

How much do vacation rentals cost in Canberra? Prices vary by location, date, size of the place, and the level of luxury. See below for options.

How much does it cost to go to Canberra? Naturally, it depends on the dates. We recommend Kayak because they can find the best deals across all airlines.

The price of renting a car in Canberra will depends on dates, the type of car, the location, and your age. We recommend Kayak because they can find the best deals across all car rental companies.

What did other people spend on Food in Canberra?

Typical prices for Food in Canberra are listed below. These actual costs are from real travelers and can give you an idea of the prices in Canberra, but your costs will vary based on your travel style.

What did other people spend on Alcohol in Canberra?

Typical prices for Alcohol in Canberra are listed below. These actual costs are from real travelers and can give you an idea of the prices in Canberra, but your costs will vary based on your travel style.

Canberra On a Budget 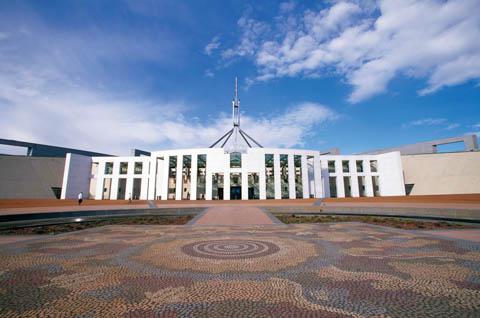 Canberra (Tourism Australia)
There is something special about the capital city of Australia. Canberra's not just a wonderful spot for outdoor adventures. It's a city completely designed and built up around the coast of an artificial lake. When architects Walter Burley and Marion Mahony Griffin proposed their plans for Canberra it was met with a lot of criticism. Many people thought it would be a "waste of a good sheep pasture."

When it was first built it was filled with politicians and people who worked for the government so it took a while for Canberra to develop its own culture.

While the capital city is a sight in and of itself, there are plenty of things to add to your sightseeing list. For starters you'll want to learn the history and culture of the city at the National Capital Exhibition. Here you'll learn about the planning and building of Canberra with a great view of Lake Burley Griffin.

The Australian War Memorial is more than a memorial â it's one of the country's leading museums displaying Australia's military history. You c an easily spend an entire day wandering through exhibits of equipment, memorabilia and battle scenes.

To see the largest collection of plants and wildlife in the country, spend some time at the Australian National Botanic Gardens. This is a great way to spend an afternoon â pack a picnic and enjoy. If you happen to be around n the summertime, look into the jazz evenings held in the gardens.

If it's a full view of Canberra you're after, head to the Black Mountain Tower. This communication tower rises above the summit of Black Mountain giving visitors a 360 view of the whole city and surrounding countryside.

Canberra is divided in half by Lake Burley Griffin â named for the architects that designed the city. The north side of the lake is home to the central shopping and commercial area known as "the civic." On the south side of the lake you'll find the parliamentary triangle and embassy area. Additionally, there are several suburbs surrounding central Canberra. Belconnen and Gungahlin are closer to the north while Tuggeranong and Woden are more southern.

The beautiful man made Lake Burley Griffin offers plenty of activities for tourists of every kind. You can hire a paddleboat, canoe, kayak, or take a scenic cruise or simply walk around the lake.

There are several spots just perfect for mountain biking in Canberra. Many of them are considered some of the best in the whole of Australia. If you're visiting in October, check out the world's largest 24-hour Mountain Bike Race.

For a little more relaxing activity, try touring the wineries around Canberra. These cool climate wines are well known and respected, and there are 33 within 35 miles of Canberra. Take your pick.

There are plenty of places to eat in Canberra, but remember that most places will be closed on Sundays. Given this city's unique past and growth, the restaurants really do run the gambit. You'll find influences from every major culture â Italian, French, American, Asian, etc. Along with that, you'll find prices from top to bottom. Whatever you're in the mood for can likely be found in Canberra.

Riding the bus around Canberra is cheap and relatively simple. Beware of the heavy traffic on inter-town routes. During weekends and off-peak hours, schedules can vary, so be sure to double-check your timetable. If you're going to need to change buses, you'll want to ask for a transfer ticket that allows you to board as many buses as you need to arrive at your final destination. Before getting on board, tell the driver where you're going and ask for your options. Some buses take longer routes to get to relatively close places. Also, note that buses don't run between midnight and 6 am, or after 7 pm on Sundays or public holidays.

Canberra has a very well developed network of cycling paths, should you decide biking is more your style. There are bike racks to lock up your bikes at most shopping centers and tourist attractions, and you must wear a helmet.

Renting a car is also an option, but beware your lead foot. Canberra takes speeding very seriously with the most speed cameras per capita in the whole country. Also, bear in mind that there are very few fuel stations on the main roads.