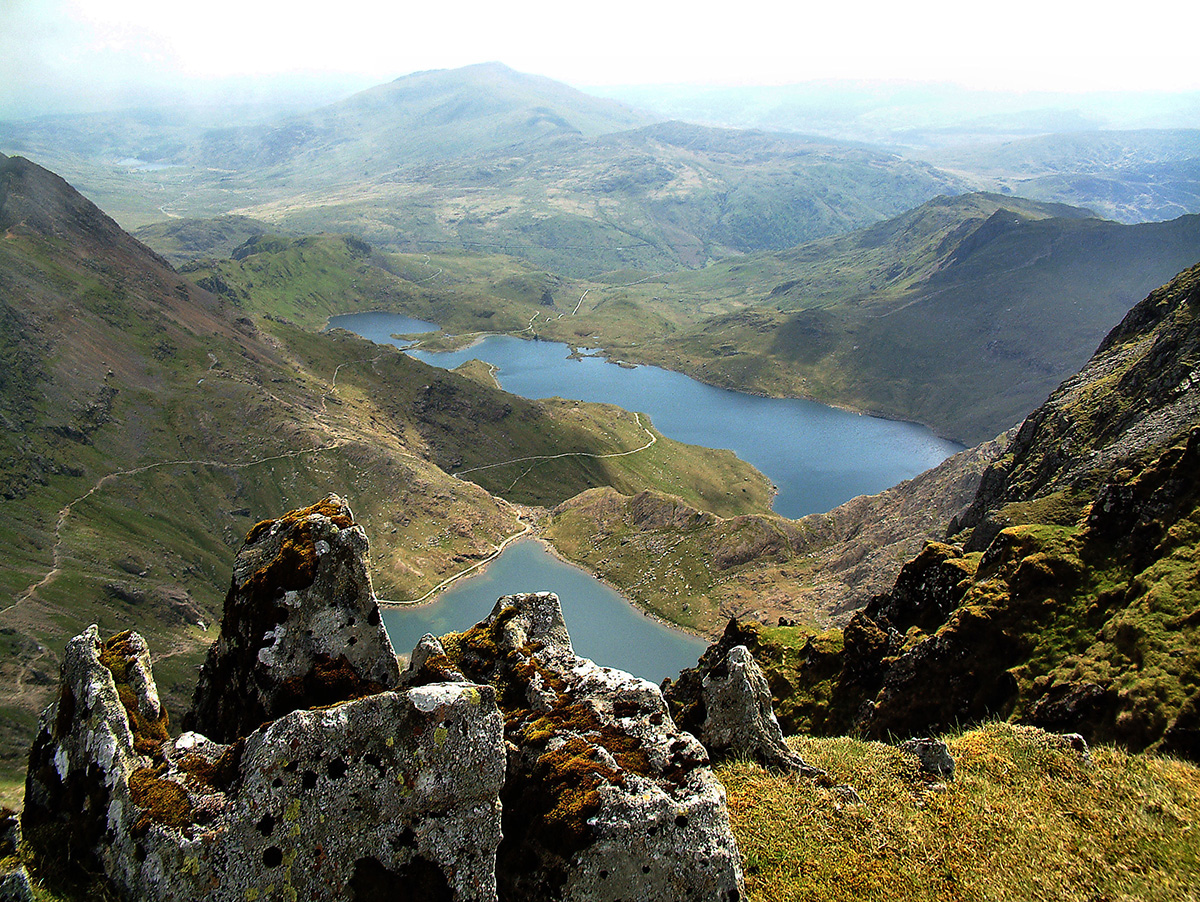 It was mostly on a whim that I decided to climb the three highest peaks in the U.K. while visiting there last summer. Mount Snowdon (3,560 ft.), Scafell Pike (3,209 ft.), and Ben Nevis (4,409 ft.) are scattered throughout Wales, England, and Scotland.  Completing the U.K. 3 Peaks Challenge ended up being one of the most incredible travel experiences I’ve had to date. Maybe it’s because I went into it with little to no training and still succeeded (which means you can too), or maybe it’s because I got to feast my eyes upon truly incredible and one of a kind views. Maybe it’s because it wasn’t just a long hike to the top of a mountain; it challenged me physically, mentally, and emotionally (in a good way). But most likely it’s because I was at the absolute tallest point in the U.K. and that felt pretty cool to say the least. Here is an overview of what to expect if you are thinking of doing the challenge.

It must first be noted that technically, the 3 Peaks Challenge is meant to be completed in 24 hours. The 24-hour challenge is just barely possible, and basically requires minute-by-minute pre planning. This means you will have an allotted amount of time to traverse the mountain, you will need to have a designated driver so that you can sleep between peaks, and you will need to have an unbelievable amount of stamina to endure these heights in one days time. Whimsical me wasn’t nearly prepared or fit enough to complete the challenge in 24 hours, so I did it over 3 days instead. Here is how it went.

A friend and I departed London by car around 9:00 am, headed for Snowdonia National Park. Side note: there are many ways to get to the 3 peaks without a car, but you’ll need to plan a few extra days into your hiking schedule for extra travel time.  The drive took about 5 hours until we finally arrived at the very cloudy, very rainy, Pyg track trailhead, located in the Pen-y-Pas car park. We set off at 3:04 pm. The Pyg track brings you up on to a ridge that over looks valleys and lakes that lie at the base of Mount Snowdon. The steep ascent began immediately, during which I wondered what I had gotten myself into. The weather conditions only worsened as we gained elevation. Not only was it foggy and wet, there were gusts that felt like 50 mph. About an hour into the hike, we decided to stop to refuel (pb&j’s are a necessity) and found that we couldn’t even set our packs down without them blowing off the nearest cliff. The ascent from here on out offered little to no visibility. Each person we passed that was descending had to give us detailed directions on how to reach the summit as we couldn’t even see our hand in front of our face. Keep in mind the wind was still present as well, so the idea of getting out our trail map was merely a joke. Somehow we managed to reach the final ascent.  It was basically a large mound on the summit with a spiral staircase leading to the very top where there was a plaque stating you were truly at the summit of Mount Snowdon. I climbed these stairs on my hands and knees for fear of literally being blown away off the summit of the mountain. Quickly after touching the plaque, we began the descent, taking care not to take a single step in the wrong direction. We intended to take the Pyg track back down the mountain but instead found ourselves on the Miners track. This track took us down into the valley on the same level with the lakes that we had admired and gazed down on from above, on the Pyg track. After getting down past the majority of the fog and wind, the rest of the hike was utterly astounding. We reached our car at exactly 7:04 pm and after 4 hours, 7 miles, and 3,562 vertical feet of elevation gain, we collapsed to the ground.

Next up was Scafell Pike, England’s tallest peak. This peak is arguably the most challenging of all three, as it gets pretty technical towards the top.  The drive from the Snowdon trailhead to the Scafell trailhead was about 5 hours as well. There are many different trailheads, all ranging in difficulty. The easiest route up is from the Wasdale trailhead. We decided to depart from the Seathwaite trailhead mostly because Seathewaite farm at the base is a great campsite with shower and toilet facilities, and we desperately needed showers. We set out on the Seathwaite track around 10:30 am (I advise beginning earlier), which began in a beautiful valley, surrounded by gills, and full of sheep. From there on out it was purely vertical ascension. At one point, we decided to take what looked like a short cut, but after consulting our trail map, we realized that we were very mistaken and could have ended up in an entirely different mountain range. That being said, I highly recommend purchasing a trail map from the visitor center in Keswick before embarking on the hike. We were lucky to have a partially sunny day while we were hiking, as we got to witness the most astonishing views from multiple points throughout our trek. We had pb&j’s under a waterfall for lunch and met many other hikers from all over the world that came to hike the three peaks. After a climb/scramble across boulders, cliff faces, and waterfalls through the corridor route, we began the ascent to the summit. It certainly lived up to its intimidating reputation. It was close to a vertical cliff face of shaley rock, and it was no longer possible to walk on two feet; instead we had to use both hands as well and literally climb to the summit. Almost immediately after summiting, the clouds cleared and a blue sky emerged while we looked out upon the majestic peaks of England that were surrounding us in every direction. After taking it all in, and also taking loads of pictures, we started the descent. Going down is usually harder than going up in my opinion, and this was definitely true in this case. We had to take extra caution when descending down the nearly vertical path of loose rubble and rock to prevent ourselves from plummeting down the face of the pike! Slowly but surely we made our way down the peak and by 4:30pm we were back at our campsite. This peak was 9.5 miles round trip, and had 3,209 vertical feet of elevation gain.

At last, the final peak haunted and excited our dreams that night as we rested for the third piece of the challenge. Side note: we didn’t rest until after driving nearly 6 hours to a campsite about an hour from the base of Ben Nevis, the tallest peak of them all, located in Northern Scotland. We woke up at 6:00 am to pack up our camping gear and drive to the Ben Nevis trailhead and I seriously wondered how I was going to be able to complete the challenge with legs made of jello. We didn’t begin hiking until 9:00 am and just as we set out on the hike, a group of people came running past us and into the parking lot. We later learned that those brave souls were on the 24-hour time limit and had already been up and down the peak that morning. Nothing like a little confidence boost before climbing the tallest peak in the U.K.! From the start, we realized that this was going to be the steepest peak of all. The trail is basically vertical for the first hour; it felt like I was climbing thousands of stairs. It then turns into a steep slalom path that doesn’t end until you are at the summit. The repetitiveness of the course, the relentless pain in my legs, and the mental battle I was fighting in my mind started to get to me. The only thing that really perked me up was spotting the first sign of snow. This meant we were really nearing the summit. After a serious temperature drop and pep talk from my friend, I got a second wind and was suddenly upon the summit. I can’t say the views were great as it was completely encapsulated in clouds, but nonetheless it was an incredible feeling. Especially when I stood on top of a monument and was the highest point in the entire country. After we got our pictures and embraced each other many times in celebration, we descended Ben Nevis at an extremely slow and tired pace. We made it to our car at 3:00 pm and after 3.5 hours, 10 miles, and 4,409 vertical feet of elevation gain, I had officially tackled the 3 Peak Challenge. I would highly recommend this adventure to all of my fellow hiking enthusiasts!

Casey recently graduated from the University of Colorado and has been traveling as much as she can ever since. She spent a year living in The Hague and six months in New Zealand. Being from Colorado, she loves exploring the great outdoors. She is also passionate about writing, especially when she can use it to share her experiences and travel advice.