How much does it cost to travel to Brasilia?

How much money will you need for your trip to Brasilia? You should plan to spend around R$339 ($69) per day on your vacation in Brasilia, which is the average daily price based on the expenses of other visitors. Past travelers have spent, on average, R$131 ($27) on meals for one day and R$90 ($18) on local transportation. Also, the average hotel price in Brasilia for a couple is R$286 ($59). So, a trip to Brasilia for two people for one week costs on average R$4,742 ($971). All of these average travel prices have been collected from other travelers to help you plan your own travel budget.

A vacation to Brasilia for one week usually costs around R$2,371 for one person. So, a trip to Brasilia for two people costs around R$4,742 for one week. A trip for two weeks for two people costs R$9,483 in Brasilia. If you're traveling as a family of three or four people, the price person often goes down because kid's tickets are cheaper and hotel rooms can be shared. If you travel slower over a longer period of time then your daily budget will also go down. Two people traveling together for one month in Brasilia can often have a lower daily budget per person than one person traveling alone for one week.


How expensive is Brasilia? How much money do I need for Brasilia?

How much does a trip to Brasilia cost? Is Brasilia expensive? The average Brasilia trip cost is broken down by category here. All of these Brasilia prices are calculated from the budgets of real travelers.

How much do vacation rentals cost in Brasilia? Prices vary by location, date, size of the place, and the level of luxury. See below for options.

How much does it cost to go to Brasilia? Naturally, it depends on the dates. We recommend Kayak because they can find the best deals across all airlines.

The price of renting a car in Brasilia will depends on dates, the type of car, the location, and your age. We recommend Kayak because they can find the best deals across all car rental companies.

Brasilia On a Budget 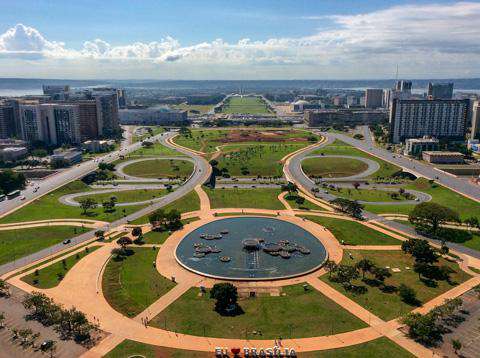 Brasilia, Brazil
The capital city of Brazil, Brasilia is a uniquely-planned city that was constructed in four years from 1956-1960 in the shape of a large bird or airplane. Renowned for its modern architecture, the city listed as a World Heritage Site by UNESCO and attracts architecture aficionados worldwide. For more information about this, check out this guide to architecture in Brasilia.

The Monumental Axis is the central avenue of the city and is the site of many important government buildings, monuments, and memorials. At the eastern end of the Axis is what is known as the Three Powers Square (or PraÃ§a dos Tres Poderes), where the country's three highest authorities are located-the Congress, the Presidential Palace (called Palacio do Planalto), and the Supreme Court. Other attractions lining this central avenue are the Television Tower right in the middle of the Axis, the Juscelino Kubitschek Memorial and museum on the western part of the Axis, and the modern Cathedral of Brasilia designed by Brazilian architect Oscar Niemeyer in 1970. The President's official residence Palacio da Alvorada (Palace of Dawn) is located on Paranoa Lake, though it is not open to visitors.

Brasilia is also a hub for art and entertainment. Its main theatre, the National Theater Claudio Santoro, features three main halls for plays and concerts, art galleries, and temporary art exhibitions. There are also many public works of art around the city featured in architecture, landscape designs, and sculptures by many famous Brazilian artists. Another center for the arts is the Centro Cultural Banco do Brasil, which houses contemporary art galleries, a cinema, and a cafe.

The city is designed in the shape of a giant bird or airplane, with various separated zones assigned for specific functions such as housing, commerce, hospitals, and banking. The Eixo Monumental (or "Monumental Axis") runs down the center of the city between the two "wings," with government buildings stationed at the end. The Monumental Axis divides the city into north and south sectors. The zones are usually referred to by acronyms; those ending in N refer to sectors on the northern side of the axis, while those ending in S are on the south. The city is divided as follows:

The arched "wings" of the city are mainly residential zones, with several rows of medium-rise apartment blocks and several small commercial districts. The intersection is the commercial and cultural hub, with stores, hotels, museums, and the Cathedral of Brasilia. The "nose" of the city faces Paranoa Lake.

For something a little different, go lakeside at Paranoa Lake and watch the sunset over the city, or visit Brasilia National Park which offers an array of indigenous plant and bird species as well as a natural swimming hole.

Cuisine of Brazil varies greatly by region, usually a mix of indigenous, European, and African influences. As the capital city of Brazil, Brasilia has a full range of flavors from traditional dishes to international fare. Brasilia itself does not have a typical, regional cuisine; however, restaurants do serve food from many Brazilian states. Rice and beans are central to traditional Brazilian cooking, as are root vegetables like cassava and yams, as well as fruits including acai, cupuaÃ§u, mango, papaya, guava, orange, passion fruit, and pineapple.

Brazilian feijoada is considered to be the national dish, a kind of black bean and meat stew typically served with rice and oranges. It is occasionally topped with vegetables such as cabbage, kale, potatoes, carrots, okra, pumpkin, chayote, and sometimes banana. The national beverage is coffee. Another popular tradition in Brazil are salgadinhos, or small savory snacks similar to Spanish tapas. Some of the more popular small bites include a kind of cheese bread called pao de queijo, a chicken croquette called coxinha, and a Lebanese-inspired snack called kibe/quibe made from cracked wheat, minced onions, and finely ground meat that can be served baked, fried, or raw.

As a national air travel hub, Brasilia is host to flights to and from many destinations. The primary airport serving the city is Presidente Juscelino Kubitschek International Airport, located about 11 kilometers from the city center. Most flights are domestic, however several non-stop international flights operate to and from Orlando, Buenos Aires, Paris, Lisbon, Lima, Bogota, Miami, Panama City, Montevideo, Santa Cruz, Bolivia, Atlanta, Punta Cana, and seasonal to Santiago and Aruba.

The city can be reached from the airport by bus or taxi. Brasilia is also well-connected by bus to the rest of Brazil. Travel times are about 15 hours from SÃ£o Paulo, 18 hours from Rio, 10 hours from Belo Horizonte, and 3 hours from Goiania.