How much does it cost to travel to Sao Paulo?

How much money will you need for your trip to Sao Paulo? You should plan to spend around R$214 ($42) per day on your vacation in Sao Paulo, which is the average daily price based on the expenses of other visitors. Past travelers have spent, on average, R$60 ($12) on meals for one day and R$24 ($4.73) on local transportation. Also, the average hotel price in Sao Paulo for a couple is R$246 ($48). So, a trip to Sao Paulo for two people for one week costs on average R$2,998 ($587). All of these average travel prices have been collected from other travelers to help you plan your own travel budget.

A vacation to Sao Paulo for one week usually costs around R$1,499 for one person. So, a trip to Sao Paulo for two people costs around R$2,998 for one week. A trip for two weeks for two people costs R$5,996 in Sao Paulo. If you're traveling as a family of three or four people, the price person often goes down because kid's tickets are cheaper and hotel rooms can be shared. If you travel slower over a longer period of time then your daily budget will also go down. Two people traveling together for one month in Sao Paulo can often have a lower daily budget per person than one person traveling alone for one week.


How expensive is Sao Paulo? How much money do I need for Sao Paulo?

How much does a trip to Sao Paulo cost? Is Sao Paulo expensive? The average Sao Paulo trip cost is broken down by category here. All of these Sao Paulo prices are calculated from the budgets of real travelers.

Looking for a hotel in Sao Paulo? Prices vary by location, date, season, and the level of luxury. See below for options.

How much does it cost to go to Sao Paulo? Naturally, it depends on the dates. We recommend Kayak because they can find the best deals across all airlines.

The price of renting a car in Sao Paulo will depends on dates, the type of car, the location, and your age. We recommend Kayak because they can find the best deals across all car rental companies.

Sao Paulo On a Budget 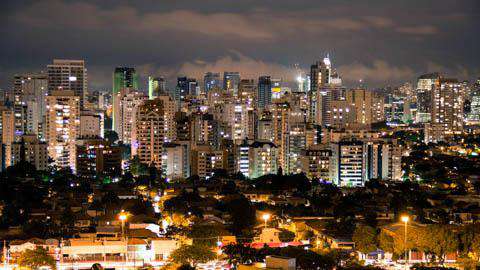 Sao Paulo, Brazil
With a population of around 11 million, and 20 million in the metropolitan area, Sao Paulo is the largest city in Brazil. It's also one of the wealthiest cities in the southern hemisphere, although you don't have to look far to see the income disparities and inequalities that exist. The city is diverse and culturally rich, with excellent food, music, and entertainment.

Despite being the largest city in Brazil, Sao Paulo is often overlooked by tourists and travelers who head straight to Rio de Janeiro. In fact, the city has plenty to see and culture abounds. The nightlife scene is excellent and each neighborhood has its own unique identity. The city is also just to the north of Parque Estadual Serra do Mar, which is a mountain range that is covered with rainforest. It makes a great ecotourism destination from the city.

Sao Paulo has a monsoon influenced humid subtropical climate with four distinct seasons: winter, summer, fall, and spring. The summers, which are between January and March, have average highs in the low 80 degrees Fahrenheit. The winter months have temperatures that range from the low 50s to the mid 70s. Rain is common year around, but most frequent in the warmer months.

The biggest appeal in visiting Sao Paulo is the great diversity of restaurants, interesting cultural events, and the handful of museums and galleries that offer you a glimpse into Brazilian culture. One of the best areas to explore is Paulista Avenue which has many restaurants, theaters, and shops. The city's historical center has many landmarks that reflect the city's past. The architecture in the area is lacking, but the area is still worth visiting. Also make sure you take time to head to the top of Banespa Tower for an outstanding view of the city. A popular park to visit is Ibirapuera Park. Two of the most notable museums around town are Museu do Ipiranga and the Memorial da America Latina. Other options are Museu de Arte de Sao Paulo, Pinacoteca do Estado, Instituto Tomio Ohtake, Museu de Arte Contemporanea, and Museu de Arte Moderna.

While initially Sao Paulo may feel like little more than a concrete city, as you take time to explore and immerse yourself in the city, you will begin to catch glimpses of its true beauty. The striking diversity in its neighborhoods is one of the more interesting aspects of Sao Paulo. You will find extremely beautiful, luxurious and glamorous neighborhoods that house the rich of Brazil, and then you will see the slums that hide the extreme poverty. The juxtaposition of these two extremes illustrates the inequality and lack of a middle class that still exists in many parts of Brazil.

Sao Paulo can be divided into several districts. The downtown has many of the city's historical sights and cultural centers. In the west you'll find the city's commercial and nightlife scene. The south central part of Sao Paulo has the wealthiest areas as well as Parque do Ibirapuera. The southeast has a large immigrant population and the northeast is where many of the city's events are held including Carnival. The far south still has forest and farms and the far east has beautiful parks. The northwest is suburban and where you'll find Parque Estadual do Jaragua.

Sao Paulo really is a cultural hub for the country. There are many concert halls and theaters around the city with two of the most important being Theatro Municipal and Sala Sao Paulo. It's also a truly unique experience to go to a soccer game in Sao Paulo. There are four teams that are in the 1st division (Sao Paulo, Corinthians, Palmeiras, and Portuguesa) and five large football stadiums around the city (Cicero Pompeu de Toledo Stadium, Morumbi, Parque Antarctica, Pacaembu, and Caninde).

Some of the most popular events and festivals in Sao Paulo include Sao Paulo Carnival, the Gay Pride Parade, Virada Cultural, Sao Paulo Indy 300, and the Brazilian Grand Prix.

Read more about this amazing city in this guide to 2 days in Sao Paulo, Brazil.

The restaurant scene in Sao Paulo is a major reason to visit the city. There is a wide variety of restaurants ranging in price from extremely budget to high end expensive. Food tents and carts offer some interesting cheap eats and are great places to grab a snack or quick lunch. Alternatively, you could eat at some of the most expensive and famous restaurants in the world, such as D.O.M.

Typical dishes in Sao Paulo include a side of beans and rice. Unlike other parts of the region, brown beans are usually used instead of black beans. Virado a Paulista is a popular dish and is made with rice, bean paste, collard greens, and pork chops. It's often served with pork rinds, sausage, a fried egg and a fried banana.

Traveling around Sao Paulo can be overwhelming and chaotic. Traffic is crazy all day long, but the peak hours really push the system to its limits. The most affordable way for tourists to travel is by subway, train, or trolleybus. The metro system is reliable and efficient. There are several lines which are most convenient for tourists. The blue line is the oldest line and travels through the city's historical center. The green line goes west to east by Avenida Paulista. The red line is a busy line that goes through the historical center. The yellow line connects the historical center to the west and the emerald line runs north to south.

Buses are a popular way to travel, but they are not as fast as the metro. They do reach almost any corner of the city and are a good option if you're traveling somewhere that the metro does not go.

Taxis are a good option for short distances. There are two types of taxis in Sao Paulo. Street-hailed taxis are cheaper and can be found at stands near city squares or popular venues. Radio taxis are more expensive and can be ordered by telephone.