How much does it cost to travel to Manaus?

How much money will you need for your trip to Manaus? You should plan to spend around R$243 ($49) per day on your vacation in Manaus, which is the average daily price based on the expenses of other visitors. Past travelers have spent, on average, R$51 ($10) on meals for one day and R$33 ($6.54) on local transportation. Also, the average hotel price in Manaus for a couple is R$348 ($70). So, a trip to Manaus for two people for one week costs on average R$3,399 ($683). All of these average travel prices have been collected from other travelers to help you plan your own travel budget.

A vacation to Manaus for one week usually costs around R$1,699 for one person. So, a trip to Manaus for two people costs around R$3,399 for one week. A trip for two weeks for two people costs R$6,797 in Manaus. If you're traveling as a family of three or four people, the price person often goes down because kid's tickets are cheaper and hotel rooms can be shared. If you travel slower over a longer period of time then your daily budget will also go down. Two people traveling together for one month in Manaus can often have a lower daily budget per person than one person traveling alone for one week.


How expensive is Manaus? How much money do I need for Manaus?

How much does a trip to Manaus cost? Is Manaus expensive? The average Manaus trip cost is broken down by category here. All of these Manaus prices are calculated from the budgets of real travelers.

How much do vacation rentals cost in Manaus? Prices vary by location, date, size of the place, and the level of luxury. See below for options.

How much does it cost to go to Manaus? Naturally, it depends on the dates. We recommend Kayak because they can find the best deals across all airlines.

The price of renting a car in Manaus will depends on dates, the type of car, the location, and your age. We recommend Kayak because they can find the best deals across all car rental companies.

Manaus On a Budget 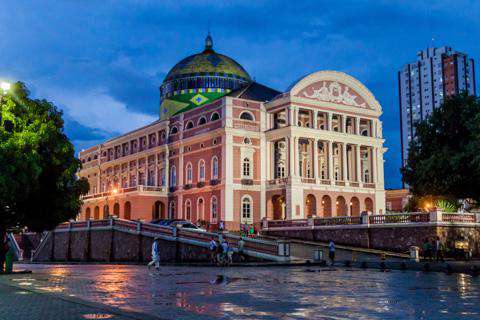 Manaus, Brazil
Manaus is a Brazilian city, capital of the state of Amazonas, and is located on the Rio Negro a few miles before it meets the Rio SolimÃµes to form the Amazon River. The city is a major departure point for those visiting the Amazon Rainforest, though there are a few sights worth seeing within the city itself as well.

Perhaps the most iconic landmark within Manaus is its opera house, Teatro Amazonas, built during the heyday of the rubber trade with materials from all over the world.Â  Today, visitors can take guided tours of the building or even see a free performance. Also impressive is the Rio Negro Palace, built by German farmers in the "golden age," and now a cultural center and theater. Other attractions within the city include the main market Mercado Municipal modeled after the Les Halles market in Paris, and the Natural Science Museum which was created by a Japanese entomologist and specializes in the local wildlife.

The rest of the area attractions are largely outdoors. The Meeting of the Waters is an especially popular location where the black waters of the Rio Negro meet the brown waters of the Rio SolimÃµes to form the Amazon River.Â  Many admire how the two rivers flow side by side without mixing for about 9 kilometers (or 6 miles). Along the riverside there are also a number of beaches for swimming and recreation, such as Ponta Negra Beach just west of the city which also has several bars and restaurants. The Rio Negro even features a waterfall, known as the Paricatuba Waterfall, formed by sedimentary rock and surrounded by lush vegetation.

From here visitors look outwards to exploring the surrounding wonders of the Amazon Rainforest, the largest forest on the planet.Â  Part of this vast expanse of forest includes the National Park of JaÃº, northwest of Manaus.Â  The park is one of the largest in Brazil and in Latin America, featuring a rich ecosystem of flora and fauna.Â  One especially sought out creature is the pirarucu-the largest fish from the Amazon.

The oldest neighborhood or "bairro" of Manaus is Educandos, from which the surrounding bairros grew. AdrianÃ³polis is the wealthiest and is located in the central-south area of the city, while the southern area of the city is occupied by Downtown Manaus right along the banks of the Rio Negro. Also called Centro, Downtown Manaus is additionally the historical center where most of the hotels and attractions are located.Â  Today the center is largely commercial as it is located on a major port of the river. The rest of the city sprawls outward from the downtown, from the central Metropolitan region that hugs the Rio Negro to outlying rural areas.

Most visitors to Manaus are interested in experiencing the greater Amazon environment. There are a number of businesses operating jungle adventure tours for experiencing the nature and wildlife of the world-renowned rainforest, as well as boating expeditions that specialize in the sights of the famous Amazon River. Tours range from day trips and overnight excursions to weeklong adventures in the rainforest or on the river. There are even trips that specialize in forest tree-climbing. Some of the more dangerous native wildlife include the anaconda, cougar, jaguar, and black caiman.

Cuisine of Brazil varies greatly by region, usually a mix of indigenous, European, and African influences.Â  Northern Brazil's cuisine, including that of the state of Amazonas where Manaus is located, is heavily influenced by indigenous cooking. As a result, local cuisine of Manaus is rich and varied.Â  Tapioquinha, for example, is a glutinous pancake made from manioc starch, usually buttered and filled with tucumÃ£ palm fruit and farmer's cheese.Â  Other delicacies include an Amazon local soup called tacacÃ¡, fish dishes like tambaqui and pirarucu, pamonha made from green corn and coconut milk boiled in corn husks, a glutinous cake made from manioc known as bolo de macaxeira, sugar cane juice, and exotic fruits like cupuaÃ§Ãº and aÃ§aÃ­. There are plenty of street stalls and restaurants serving these items and more within the city.

The nearest airport, Eduardo Gomes International Airport, is located about 14 kilometers north of downtown Manaus. American Airlines operates one daily flight to and from Miami, Air Portugal flies to and from Europe, and many lines operate flights domestically to and from other Brazilian cities. From the airport, visitors can take taxis or buses to the city center.

Manaus is also a major destination for boats along the Amazon River, connecting it to cities like Belem, Porto Velho, Tabatinga on the border with Colombia, and Iquitos in Peru.