A Travel Price Comparison for Spain Andalusia vs. Basque Country for Vacations, Tours, and Honeymoons

Should you visit Andalusia or Basque Country?

If you're trying to decide where to visit between Andalusia or Basque Country, this travel comparison, which includes costs, can help. The overall cost of travel is usually a consideration when deciding where to go next, and the cost comparison down below can help you decide based on the average prices from other travelers along with your own travel budget.

Where Should I go: Andalusia or Basque Country?

Upon its lush green hills that tower over the deep blue waves of the Atlantic Ocean, you will find its perfected oceanic climate and breathtaking landscape to be only the beginning of Basque Country, Spain. Basque Country, or Euskadi, is an autonomous community located in northern Spain. This community was based off the Statute of Autonomy of the Basque Country, a legal document that enabled Basque people to develop on Spanish territory. Due to its strong traditional currents in Spanish heritage as well as magnificent architecture, Basque Country is a hotspot for tourists everywhere.

Which city is cheaper, Basque Country or Andalusia?

The average daily cost (per person) in Andalusia is €100, while the average daily cost in Basque Country is €95. These costs include accommodation (assuming double occupancy, so the traveler is sharing the room), food, transportation, and entertainment. While every person is different, these costs are an average of past travelers in each city. What follows is a categorical breakdown of travel costs for Andalusia and Basque Country in more detail.

Looking for a hotel in Andalusia or Basque Country? Prices vary by location, date, season, and the level of luxury. See below for options and compare which is best for your budget and travel style.

Also for Basque Country, here are a few examples of actual transportation services:

Is it cheaper to fly into Andalusia or Basque Country?

Prices for flights to both Basque Country and Andalusia change regularly based on dates and travel demand. We suggest you find the best prices for your next trip on Kayak, because you can compare the cost of flights across multiple airlines for your prefered dates.

Tours and Activities in Basque Country

Also, here are some specific examples of entertainment, tickets, and activities for Basque Country.

Some specific costs for nightlife related activities in Basque Country:

When comparing the travel costs between Andalusia and Basque Country, we can see that Andalusia is more expensive. However, the two cities are actually relatively comparable in price, as the difference is somewhat minimal. Generally, this means that you could travel with generally the same travel style and level of luxury in each place. Since both cities are in Europe, it's no surprise that their costs are relatively close, as many destinations here have somewhat similar travel prices overall. 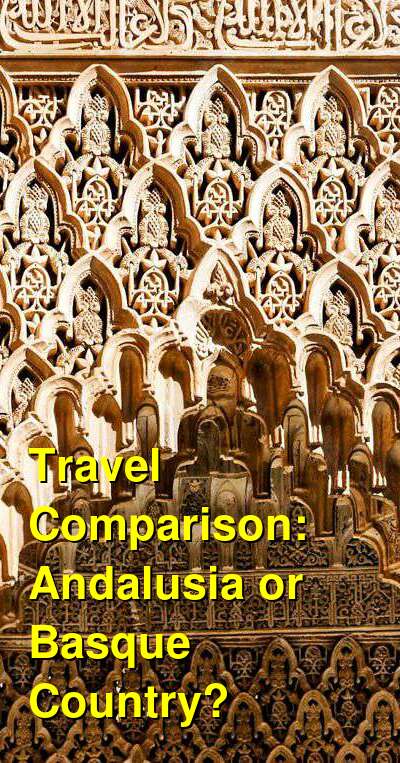