How much does it cost to travel to Seville?

How much money will you need for your trip to Seville? You should plan to spend around €99 ($108) per day on your vacation in Seville, which is the average daily price based on the expenses of other visitors. Past travelers have spent, on average, €30 ($32) on meals for one day and €14 ($15) on local transportation. Also, the average hotel price in Seville for a couple is €90 ($98). So, a trip to Seville for two people for one week costs on average €1,385 ($1,506). All of these average travel prices have been collected from other travelers to help you plan your own travel budget.

A vacation to Seville for one week usually costs around €693 for one person. So, a trip to Seville for two people costs around €1,385 for one week. A trip for two weeks for two people costs €2,770 in Seville. If you're traveling as a family of three or four people, the price person often goes down because kid's tickets are cheaper and hotel rooms can be shared. If you travel slower over a longer period of time then your daily budget will also go down. Two people traveling together for one month in Seville can often have a lower daily budget per person than one person traveling alone for one week.


How expensive is Seville? How much money do I need for Seville?

How much does a trip to Seville cost? Is Seville expensive? The average Seville trip cost is broken down by category here. All of these Seville prices are calculated from the budgets of real travelers.

Looking for a hotel in Seville? Prices vary by location, date, season, and the level of luxury. See below for options.

How much does it cost to go to Seville? Naturally, it depends on the dates. We recommend Kayak because they can find the best deals across all airlines.

The price of renting a car in Seville will depends on dates, the type of car, the location, and your age. We recommend Kayak because they can find the best deals across all car rental companies.

What did other people spend on Food in Seville?

Typical prices for Food in Seville are listed below. These actual costs are from real travelers and can give you an idea of the prices in Seville, but your costs will vary based on your travel style.

What did other people spend on Entertainment in Seville?

Typical prices for Entertainment in Seville are listed below. These actual costs are from real travelers and can give you an idea of the prices in Seville, but your costs will vary based on your travel style.

Tips and Handouts Budget in Seville

Seville On a Budget 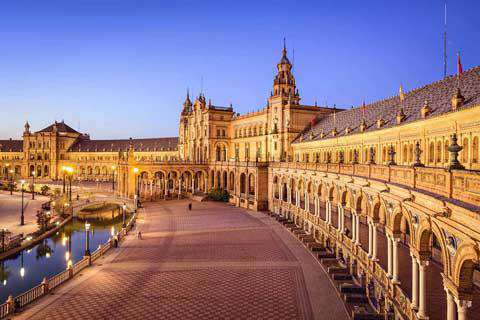 Seville
The capital city of Andalucia, Seville is both the cultural and financial hub of southern Spain. It's also a popular tourist destination. The city has over 700,000 residents and 1.6 million in the metropolitan area, making it the fourth largest city in the country. It is cut in half by the Guadalquivir River, with the two halves referred to as Sevilla and Triana. Seville has continued to grow in popularity as a tourist destination since the 19th century when it was included as a stop on the Romantic "Grand Tour" of Europe. In 1992 Seville hosted the International Exposition which led to the construction of a new airport, train station, as well as other infrastructural improvements. Today Seville remains very popular with tourists for its many festivals, interesting attractions, great restaurants and nightlife scene.

Seville has a subtropical Mediterranean climate with a dry summer and wet winter. Seville has one of the hottest summers in all of continental Europe with highs in July reaching 36 degrees Celsius. Winters are usually mild with January being the coolest month. Average highs still linger around 16 degrees Celsius and lows can drop to 5 degrees Celsius. Most of the rain occurs between the months of October and April, with December being the wettest month.

There are many landmarks around town in Seville, with some of the most popular including the Cathedral of Seville, La Giralda Tower, the Jewish Quarter, Real Alcazar, the Hospital de los Venerables, Torre de Oro and Parque Maria Luisa. Popular museums include Museo de Bellas Artes, Museo de Carruajes, Museo del Baile Flamenco and the Archeology Museum.

The historical heart of Seville is where you will find most of the sights. This area, Centro Historico has the Seville Cathedral, some upscale hotels, and many restaurants. Barrio Santa Cruz is the former ghetto for Seville's Jews, and today it has many ornate fountains, gates and courtyards. There are some interesting churches, restaurants, and charming narrow alleyways. La Macarena is often overlooked by visitors, but it has several interesting sights such as the Convento de Santa Ines. Triana and El Arenal are both districts that were made famous by several of Spain's Golden Age writers. There is a riverside esplanade, Marques de Contadero, that runs along the banks of the river, as well as a handful of sights.

There are many different things to do around Seville. Some interesting activities include flamenco dancing, attending a bull fight, and wandering through the many outdoor markets which have anything from food to clothing or furniture for sale. It's easy to fill several days, at least, in Seville.

If you're looking for some good food, tapas are a favorite in Seville. These small dishes are about the size of an appetizer and are usually delicious when enjoyed with wine. You'll want to order several as they are much smaller than entree sized, but they are quite delicious and can be surprisingly filling. There are great tapas places throughout Seville, with many concentrated around the cathedral in the center of town. There are some bars near the river that have good views, but prices can be a little steep given the quality of the food. If you're on a particularly tight budget you can buy your own food at any of the markets that are around the city center. Enjoy a meal of your own making as a picnic with a view.

Like most major cities in Spain, Seville's public transportation is excellent. You can travel most places by bus, which are frequent and generally efficient. Another interesting option is the service bikes available for rent around town. They're stored at docking stations and you can purchase a week long pass for five euros. With this pass you'll get a half hour free and then pay one euro for every subsequent hour. Alternatively you could also rent a scooter for a day for roughly 30 euros. There is a tram system but it is being integrated into Seville's transportation system. It runs from the San Bernardo Train Station to the Plaza Nueva and will eventually continue north and west into Triana. The metro system opened in 2009 and makes a "U" shape traveling from the southwest to the southeast through the southern end of the city. It stops at Plaza de Cuba, Prado de San Sebastian and San Bernardo. Taxis are also an option and are easily accessed throughout the city.

Looking for a party in Barcelona or Madrid?
Traveling alone to Granada?