How much does it cost to travel to Las Palmas de Gran Canaria?

Looking for a hotel in Las Palmas de Gran Canaria? Prices vary by location, date, season, and the level of luxury. See below for options.

How much does it cost to go to Las Palmas de Gran Canaria? Naturally, it depends on the dates. We recommend Kayak because they can find the best deals across all airlines.

The price of renting a car in Las Palmas de Gran Canaria will depends on dates, the type of car, the location, and your age. We recommend Kayak because they can find the best deals across all car rental companies. 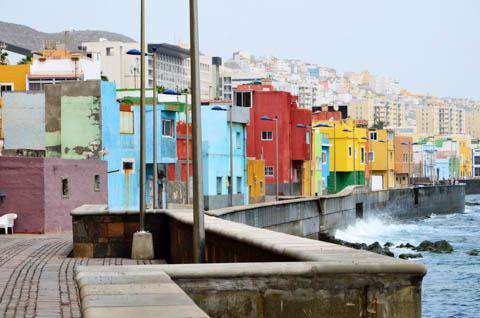 Las Palmas, Gran Canaria, Spain
Las Palmas is the largest city on Gran Canaria, and one of the capitals of the Canary Islands. It is located in the northeast of the island with plenty to see and do from ocean-side activities on the beach to sightseeing, shopping, museums, culture, and architecture.

Playa de Las Canteras is the beach of Las Palmas. Almost 4 kilometers in length, it is considered to be one of the best urban beaches in the world. With a barrier reef the surf is quite safe, and there are a number of things to do along the promenade. To the east of the beach is the bustling district of Santa Catalina, where the shopping hub is located as well as the Parque Santa Catalina. The park is more of a square dotted with palm trees and flowerbeds, and features a lively night scene with restaurants, bars, clubs and discos.

As far as landmarks go, the Catedral de Santa Ana can be seen from just about anywhere in the city. Its architecture exhibits centuries of history, and visitors can climb to the top for views of Las Palmas below. Other sights include a number of museums dedicated to the history and culture of the city. One of these includes an old mansion behind the cathedral called the Casa de ColÃ³n Museum. It was once the home of the governor and possibly the temporary residence of Christopher Columbus before he departed for the Americas. The mansion now houses a museum about the explorer, the conquest of the Canary Islands by the Crown of Castille, and the pre-columbine America.

Triana is one of the oldest districts in Las Palmas, and is now the city's commercial center. This pedestrianized downtown center makes up the historic district along with Vagueta, and is also a hub for drinking, dining, and shopping. The first Sunday of every month in Triana is especially lively with a "Sunday Shopping Party" that features free music concerts and events held 11am to 6pm. The other most popular shopping center is the AvenÃ­da Mesa y LÃ³pez which houses two big department stores and many other shops.

Being a beach town, Las Palmas is especially popular for ocean-side activities. Down by the water, the beach is a prime location for sunbathing, beach sports, swimming, surfing, and scuba diving. With warm waters, tropical fish, and great surf, Gran Canaria is sometimes referred to as the "Hawaii of the Atlantic." There are a number of surf schools for beginners as well as instructors available for scuba excursions.

In the heart of the city there are plenty of opportunities for sightseeing, shopping, and dining, while it is also easy to take transportation out of the city to other beaches or adventures on land. Hiking and mountain biking trails run throughout the island, while there are a number of golf courses in the southern parts.

Cuisine of Gran Canaria is influenced by a combination of aboriginal flavors, Latin American cooking, as well as some African touches. Many small dishes or tapas are served around the island and are known locally as enyesques. They are often accompanied by a sauce called mojo made mainly of oil, garlic, vinegar, salt, red pepper, thyme, oregano, coriander, and several other spices. There are two varieties of mojo: rojo (or red, often served with meat) and verde (or green, often served with fish). Traditional Canarian meals usually start with soup and are followed by a main dish, consisting of local meat or fish. The ingredients of Gran Canarian cuisine are often simple but rich and flavorful, including desserts like bienmesabe-a paste of almonds, honey, and sugar often served with ice cream or cream. As far as drinks go, there are a number of local wines and liquors. Food vendors and restaurants are abundant in the city. The historic district, Vagueta, is especially popular for drinks and dining.

Gran Canaria Airport, sometimes also known as Gando Airport or Las Palmas Airport, is the main way of entry to the island. The airport is located in the eastern part of Gran Canaria on the Bay of Gando (BahÃ­a de Gando), about 12 miles south of the city center of Las Palmas de Gran Canaria, and 16 miles from the popular tourist areas in the south. Flights to and from international destinations are available.

Once on the island public transportation is available, organized, and affordable. There are regular buses that run all around Gran Canaria, and rental cars are available.

Other nearby islands can also be reached by ferry.