How much does it cost to travel to Malaga?

How much money will you need for your trip to Malaga? You should plan to spend around €73 ($89) per day on your vacation in Malaga, which is the average daily price based on the expenses of other visitors. Past travelers have spent, on average, €12 ($14) on meals for one day and €14 ($17) on local transportation. Also, the average hotel price in Malaga for a couple is €91 ($111). So, a trip to Malaga for two people for one week costs on average €1,026 ($1,245). All of these average travel prices have been collected from other travelers to help you plan your own travel budget.

A vacation to Malaga for one week usually costs around €513 for one person. So, a trip to Malaga for two people costs around €1,026 for one week. A trip for two weeks for two people costs €2,052 in Malaga. If you're traveling as a family of three or four people, the price person often goes down because kid's tickets are cheaper and hotel rooms can be shared. If you travel slower over a longer period of time then your daily budget will also go down. Two people traveling together for one month in Malaga can often have a lower daily budget per person than one person traveling alone for one week.


How expensive is Malaga? How much money do I need for Malaga?

How much does a trip to Malaga cost? Is Malaga expensive? The average Malaga trip cost is broken down by category here. All of these Malaga prices are calculated from the budgets of real travelers.

Find a hostel, guesthouse, or B&B in Malaga

What did other people spend on Hotels in Malaga?

Typical prices for Accommodation in Malaga are listed below. These actual costs are from real travelers and can give you an idea of the prices in Malaga, but your costs will vary based on your travel style.

What did other people spend on Food in Malaga?

Typical prices for Food in Malaga are listed below. These actual costs are from real travelers and can give you an idea of the prices in Malaga, but your costs will vary based on your travel style.

How much does it cost to go to Malaga? Naturally, it depends on the dates. We recommend SkyScanner because they can find the best deals across all airlines.

The price of renting a car in Malaga will depends on dates, the type of car, the location, and your age. We recommend SkyScanner because they can find the best deals across all car rental companies.

What did other people spend on Entertainment in Malaga?

Typical prices for Entertainment in Malaga are listed below. These actual costs are from real travelers and can give you an idea of the prices in Malaga, but your costs will vary based on your travel style.

Tips and Handouts Budget in Malaga

What did other people spend on Water in Malaga?

Typical prices for Water in Malaga are listed below. These actual costs are from real travelers and can give you an idea of the prices in Malaga, but your costs will vary based on your travel style.

Malaga On a Budget

Malaga, Andalusia, Spain
Malaga is a port city in the southern part of Spain. It is the 6th largest city in Spain and the southernmost large city in Europe. Malaga lies on the Mediterranean on the Costa del Sol, only 62 miles east of the Strait of Gibraltar, and 80 miles north of Africa. Malaga's history dates back about 2,800 years, which makes it one of the oldest cities in the world. The archaeological remains and monuments from the Phoenician, Roman, Arabic and Christian eras make the historic center of the city an "open museum", displaying its history of more than 3,000 years. Because of its important cultural infrastructure and the artistic heritage, Malaga has been nominated for the European Capital of Culture. Malaga's most important economic contributors include tourism, technology, and construction, but transportation and logistics are becoming increasingly important factors as well.

One sight that is definitely worth a stop in the area is Alzcaba, a palace-fortress that has been extensively restored. It dates from the 11th-century Moorish period; the caliphal horseshoe arches, courtyards and fountains are suggestive of this influential period in Malaga's history. There is also a small archaeological museum located in the former servants' quarters of the Nazari palace, with its exhibits of Moorish ceramics and pottery.

The Museo de Picasso is a great stop for Picasso fans. It is a museum with more than 200 works all of which are donated or loaned by the wife of Pablo Picasso's eldest son. Another place worth stopping to see is the Catedral de Malaga. The stricter was started in the 16th century. Inside, the domed ceiling soar 40m into the air, while the vast colonnaded houses a cedar-wood choir. Aisles lead to 15 chapels with gorgeous 18th-century retables and religious art. Climb the tower (200 steps) to enjoy stunning panoramic views of the city skyline and coast.

Much of life in Malaga is centers around the Old Town area, where you will find a range of historical buildings, shops and a thriving street-cafe culture.

The Los Montes neighborhood of Malaga is a very popular part of the city, and features a number of spectacular views and a high concentration of both restaurants and accommodation.

Malaga's many beaches are also a neighborhood or district area in themselves, with many popular attractions and entertainment venues to explore and experience.

Malaga has a few large festivals that are big attractions to the area. One of which is The Feria de Malaga celebration, which takes place in the month of August. During this festival the streets are transformed into traditional symbols of Spanish culture and history, with sweet wine, tapas, and live flamenco shows. The day events consist of dancing, live music (like Flamenco or Verdiales, traditional music from Malaga) and bullfights at La Malagueta, while the night fair is moved to the Recinto Ferial, consisting of restaurants, clubs, and an entire fair ground with rides and games. Two of the other large festivals include The Holy Week Festival, which runs from Palm Sunday through Easter Sunday, and the Malaga Film Festival, which is held annually for one week in March or April.

There are many other activities to be found in Malaga. Spend a day on the beach area of the Costal del Sol, take a Segway tour of the city, visit one of the many museums, or take one of the many tours offered. Since Malaga is a port city, it is often a place where cruise ships dock and there are many tours offered from this area, including an exciting tapas tour and flamenco dance.

Malaga is a great place to enjoy food and dining. It is an area full of diverse local foods including fish, olives, almonds, grapes, raisins, wine, and many seasonal vegetables. The selection makes this some of the freshest and tastiest food you can imagine.

A few local dishes to look out for include: Gazpachuelo Malagueno, which is a locally made soup originally created by fishermen in the area, Plato de los Montes de Malaga, which is the "dish of the mountains of Malaga" and is their take on a combination plate, and Fritura Malaguena, which is the Malagan fried fish. A few restaurants worth checking out are La Recova, Casa Aranda, and Antigua Casa de Guardia.

The easiest way into Malaga is by flight into the Malaga Costa Del Sol Airport. This airport is the oldest airport in Spain still in operation and is the fourth busiest in Spain. There are several options of direct transport into the city area from the airport including trains and buses, but hiring a car is another option if that is the preferred method of transportation. Malaga is a large city, so the public transportation options are good, including a couple of extensive bus systems as well as some light rail systems. Malaga also has train connections to many other major cities both within Spain and around Europe. Malaga also has a hop on/hop off bus option, which allows you to see the top sights of the city at your own pace. 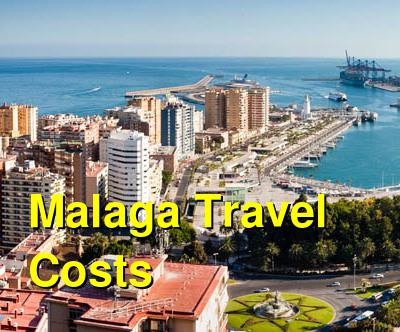