How much does it cost to travel to Zaragoza?

How much money will you need for your trip to Zaragoza? You should plan to spend around €101 ($105) per day on your vacation in Zaragoza, which is the average daily price based on the expenses of other visitors. Past travelers have spent, on average, €33 ($34) on meals for one day and €18 ($19) on local transportation. Also, the average hotel price in Zaragoza for a couple is €103 ($108). So, a trip to Zaragoza for two people for one week costs on average €1,412 ($1,471). All of these average travel prices have been collected from other travelers to help you plan your own travel budget.

A vacation to Zaragoza for one week usually costs around €706 for one person. So, a trip to Zaragoza for two people costs around €1,412 for one week. A trip for two weeks for two people costs €2,824 in Zaragoza. If you're traveling as a family of three or four people, the price person often goes down because kid's tickets are cheaper and hotel rooms can be shared. If you travel slower over a longer period of time then your daily budget will also go down. Two people traveling together for one month in Zaragoza can often have a lower daily budget per person than one person traveling alone for one week.


How expensive is Zaragoza? How much money do I need for Zaragoza?

How much does a trip to Zaragoza cost? Is Zaragoza expensive? The average Zaragoza trip cost is broken down by category here. All of these Zaragoza prices are calculated from the budgets of real travelers.

Looking for a hotel in Zaragoza? Prices vary by location, date, season, and the level of luxury. See below for options.

How much does it cost to go to Zaragoza? Naturally, it depends on the dates. We recommend Kayak because they can find the best deals across all airlines.

The price of renting a car in Zaragoza will depends on dates, the type of car, the location, and your age. We recommend Kayak because they can find the best deals across all car rental companies.

Zaragoza On a Budget 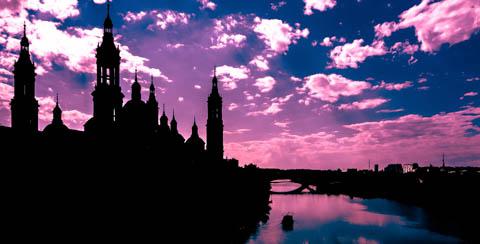 Zaragoza, Spain
As the sun slips below the horizon, the night is greeted by the familiar glow of the exquisite cathedral Basilica del Pilar that stands above the city like a shimmering castle. This city is none other than Zaragoza, Spain, the capital city of the Zaragoza province in Aragon, Spain. Overlooking the Ebro River, Zaragoza has a population of 701,090, ranking the 32nd most populated municipality in the European Union. Zaragoza has attracted travelers from all across the world, causing the city to host the Expo in the summer of 2008 and also stand as a candidate for the European Capital of Culture in 2012. Besides its glimmering cathedral, Zaragoza is also known for its rich history in folklore, local gastronomy, as well as hosting the well-known Fiestas del Pilar, the most celebrated of festivals in Spain.

As stated previously, Basilica del Pilar is among the most sought-after landmarks in all of Spain. Described as a must-visit amidst travelers, Basilica del Pilar was built in 1681 by Felipe Sanchez and Herrera, but later remodeled in the 18th century by Ventura Rodriguez. It was only until the 20th century that the towers were completely finished. Basilica del Pilar has received wide acclaim from pilgrims throughout the globe and have been visited many, including Saints Teresa of Avila, John of the Cross and Ignatius Loyola, as well as some of the kings and queens of Spain. Basilica del Pilar holds guided tours, with its museum open daily from 9 AM to 2 PM and 4 PM to 6 PM. While touring, be sure to catch a glimpse of the star attraction, the statue of Our Lady of the Pillar located in the Holy Chapel and Museo del Pilar.

If you are looking to shop, look no further than Zaragoza, also known as the city of shops. The first shopping district is located on the main street of Paseo de Independencia. There is a plethora of art and bookstores as well as major chains like Mango, Corte Ingles and Zara. The second shopping district that is just as popular is directly behind the large El Corte Ingles on Sargasta. Along this street, you will find a collection of stores in the widest variety. Nevertheless, keep in mind that these are top-rate stores that demand top-rate price! Lastly, be sure to check out the neighborhood "Actur" where the largest shopping district of the city is located, the "Gran Casa," What's more, unlike the other districts, you are able to find all types of stores with a wide range of prices.

Take advantage of the scenic beauty of Zaragoza, and visit the Ebro River. One of the most important rivers on the Iberian Peninsula, it is the second largest river in the peninsula after Tagus. With a length of 930 kilometers, travelers are free to fish and raft in the Ebro. The Ebro also has nature reserves to be explored along the river, such as the Ebro Delta. Ebro Delta is a 320-kilometer nature reserve that holds magnificent gardens, forests, and rice fields. Hike through the Ebro Delta while admiring the astounding Mediterranean wildlife, getting a taste of the true beauty that is Zaragoza.

If you want to kick your feet back and enjoy a five-star dining experience, stop by La Granada, located near Plaza de Basilio and Paseo de la ConstituciÃ³n. La Granada was designed by winner of the National Design and Illustration award Isidro Ferrer. Designed with modern elegance and a wide array of design types, La Granada does not fall short in any category. The menu is both diverse and traditional, holding such classic dishes as meloso of veal stewed with red wine with citrus aroma and prawns with gabardina of pasta brick, sweet and sour sauce and arugula. Be sure you stock up your wallet before leaving to La Granada!

Zaragoza is known for its excellent availability of public transport. City buses run from 5:30 AM to 12:30 AM. Nightly bus routes, also known as the "Owls" by locals, run from 1 AM to 6 AM and include no more than 7 buses. Unfortunately, these night routes only run on Saturdays as well as public holidays. If you want to ride a train, they can be found at any time of the day. These trains are highly characteristic and cannot be missed with their white bodies, Aragona flags and the city crest on the front doors. These trains are most commonly found the city's most central streets and squares or can be ordered by way of the radio taxi service.