How much does it cost to travel to Madrid?

How much money will you need for your trip to Madrid? You should plan to spend around €97 ($107) per day on your vacation in Madrid, which is the average daily price based on the expenses of other visitors. Past travelers have spent, on average, €24 ($27) on meals for one day and €15 ($16) on local transportation. Also, the average hotel price in Madrid for a couple is €107 ($119). So, a trip to Madrid for two people for one week costs on average €1,357 ($1,505). All of these average travel prices have been collected from other travelers to help you plan your own travel budget.

A vacation to Madrid for one week usually costs around €678 for one person. So, a trip to Madrid for two people costs around €1,357 for one week. A trip for two weeks for two people costs €2,713 in Madrid. If you're traveling as a family of three or four people, the price person often goes down because kid's tickets are cheaper and hotel rooms can be shared. If you travel slower over a longer period of time then your daily budget will also go down. Two people traveling together for one month in Madrid can often have a lower daily budget per person than one person traveling alone for one week.


How expensive is Madrid?

How much does a trip to Madrid cost? Is Madrid expensive? The average Madrid trip cost is broken down by category here. All of these Madrid prices are calculated from the budgets of real travelers.

While meal prices in Madrid can vary, the average cost of food in Madrid is €24 per day. Based on the spending habits of previous travelers, when dining out an average meal in Madrid should cost around €10 per person. Breakfast prices are usually a little cheaper than lunch or dinner. The price of food in sit-down restaurants in Madrid is often higher than fast food prices or street food prices.

The cost of a taxi ride in Madrid is significantly more than public transportation. On average, past travelers have spent €15 per person, per day, on local transportation in Madrid.

How much does it cost to go to Madrid? Naturally, it depends on the dates. We recommend SkyScanner because they can find the best deals across all of the airlines.


How much money do I need for Madrid?

How much do tours to Madrid cost? Multi-day tours can often be an effecient way to see the highlights of a country or region.

Find a hostel, guesthouse, or B&B in Madrid

Madrid On a Budget 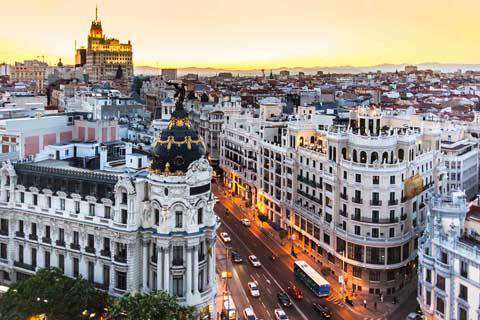 Madrid
Madrid, the capital of Spain, overs visitors countless opportunities to experience Spain's culture, art, cuisine, and nightlife. It is the largest city in Spain, and as such has much to explore. The city is situated on the Iberian Peninsula on the Spanish central Castillian plateau. If you're flying into Spain, you'll likely fly into the Madrid airport as it's one of the largest airports in Europe. Madrid is well connected to the rest of Spain with planes, trains and buses, making it a popular place to visit for many travelers doing a European tour.

Madrid's climate is relatively dry with a hot and dry summer season and a cold winter with occasional snowfall. Spring and fall are moderate in temperature but do get the most rain. These are the best times to visit as the temperatures are comfortable and you avoid some of the summer crowds.

There are many historic and cultural sights throughout Madrid. Don't miss the Museo del Prado, which has an excellent collection of art, perhaps one of the best in the world. Also visit the Palacio Real (Royal Palace), and Plaza Mayor, the most famous plaza in Madrid. Take in a Flamenco show and have a meal of tapas. Both are quintessential Spanish experiences. Also head over to Mercado de San Miguel, which is an impressive indoor market in Madrid. Parks are great places to pass time in Madrid as well. It's fun to people watch and simply relax in the sun. Some of the most popular parks include El Retiro Park, Parque del Capricho, and La Casa de Campo.

Madrid has a diverse population with many interesting and unique neighborhoods. Some of the most interesting include Alonso Martinez, with its many pubs and clubs, Barrio de las Letras, with its rich history and Plaza de Santa Ana, and Chueca, with its eclectic shops and trendy cafes. Tribunal and Conde Duque are known for their rock and pop music clubs. Gran Via is also a popular area for nightclubs. La Latina is where you want to go to try tapas. Nearby Lavapies is an ethnic area with a large population of African, Asian and Latin American residents. Both Moncloa and Ciudad Universitaria have large student populations.

Popular activities around Madrid include Flamenco shows, concerts, the opera, football (soccer), bullfighting and basketball. Any of these activites offer visitors a unique experience and are worth checking out. Popular festivals include La Transhumancia, which is a yearly event when shepherds take over the city with their sheep and livestock for the day. La Paloma is a huge street party in the La Latina neighborhood. The bars play music and food stalls line Carrera de San Francisco.

Madrid has typical Spanish cuisine with a few local specialties as well. Some of the local dishes include Gallinejas and entresijos, which is lamb that is fried in its own fat, Callos a la Madrilena, a spicy beef tripe dish, and Cocido Madrileno, which is a chickpea soup. There's also great seafood available, which is a little surprising given the city's inland location. It can be expensive though.

Paella is a popular dish in Madrid, but if you're going to try it, go ahead and pay for a good restaurants. The more budget options found in the Sol and Plaza Mayor areas are not good and are best avoided. Instead head to the La Latina neighborhood where you'll find some great restaurants. For take away food that is good, go to the shops along Calle Arenal.

Lunch is usually served late, around 2pm or 3pm and dinner isn't served until 9pm or 10pm. Some touristy restaurants may serve meals earlier, but in general this is the norm. Bars generally stay open all day long and offer tapas and bocadillos for a good price. Fast food chains are also open around town all day.

Madrid Car Rental Prices
Compare prices across all major rental companies:
Within Madrid there is a wonderful public transportation network that successfully integrates the bus and subway systems together. It is also one of the largest transit networks in Europe, and is one of the best ways to travel around the city with relative ease. While taxis are another option, they can be surprising difficult to find as there are few taxi stands around town. Particularly during the late hours on weekends or during rainstorms, you're less likely to find a taxi with ease. Driving yourself around this city is incredibly frustrating and not at all recommended unless you are familiar with the city and it's traffic patterns. With such a successful public transit system, there is little need to drive in Madrid, so it is best avoided.

Looking for a party in Barcelona?
Traveling alone to Granada or Seville?

Train and Bus Prices
The best prices for buses and trains in Spain can be found on Omio (formerly GoEuro). They let you search across all train, bus, and plane routes throughout Europe.

By Bryan in Entertainment
Check out one of the many Flamenco dancing shows around town for a real cultural experience. The Corral de la Moreria, in thte middle of the city, is one of the best and most famous flamenco tablaos. Also, you could go to Las Tablas (Plaza España, 9) or the Cardamomo Flamenco Show (Echegaray 15). Some of them even offer food or lessons during the show.